I recently discussed a very nice paper by Anna Orlik (FRB) and Laura Velkamp (NYU, Stern School of Business) on uncertainty shocks and the role of Black Swans, at the Paris School of Economics – SCOR Annual Conference. By playing with the data they used (real US GDP growth rate from 1968q4 to 2013q4, see Figure below), it is striking to see the degree of Non-Gaussianity of this series.

Indeed, there is an asymmetry to the left (Skewness= – 0.30) and the tails of the distribution are much thicker than those of a Gaussian distribution (Kurtosis = 4.98). A standard Jarque-Bera test strongly rejects the null of Gaussianity of this distribution.  When plotting the estimated empirical distribution of the GDP growth rate and a Normal distribution with corresponding estimated mean and variance, we clearly see the gap between the two distributions (see Figure below). 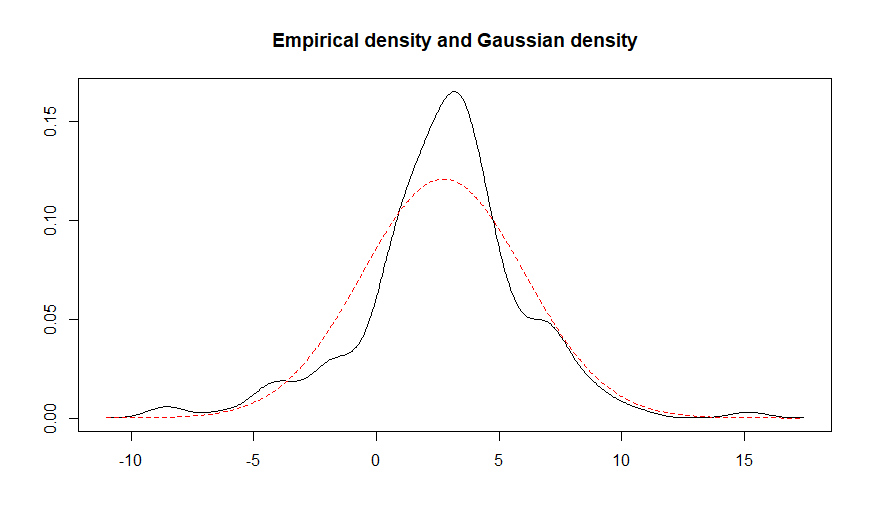 Note: Kernel estimation of the US GDP growth using the R ‘density’ function with default options (black line). Sample mean is equal to 2.74 and sample standard error is equal to 3.30. Red line is the Gaussian distribution with those 2 estimated parameters.

In fact, the right tail of the empirical distribution seems to be quite in line with the one from a Gaussian distribution, but there are some clear divergences on the left tail, mainly due to the occurrence of seven recessions over the sample, as defined by the NBER Business Cycle Dating Committee.

By chance, econometricians have access to a battery of theoretical distributions accounting for asymmetry and fat tails. In a recent paper by Adrian, Boyarchenko and Giannone, just published in the AER, a Skewed-Student distribution is used to predict US GDP growth starting from a Financial Condition Index. This Skewed-Student distribution (see Azzalini and Capitanio, 2003) accounts for both asymmetry and fat tails using four parameters to be estimated, reflecting the first four moments of the distribution.

By fitting a Skewed-Student distribution to the US GDP growth through the Maximum Likelihood approach, we get indeed a much better fit than when using the Gaussian distribution (see Figure below) 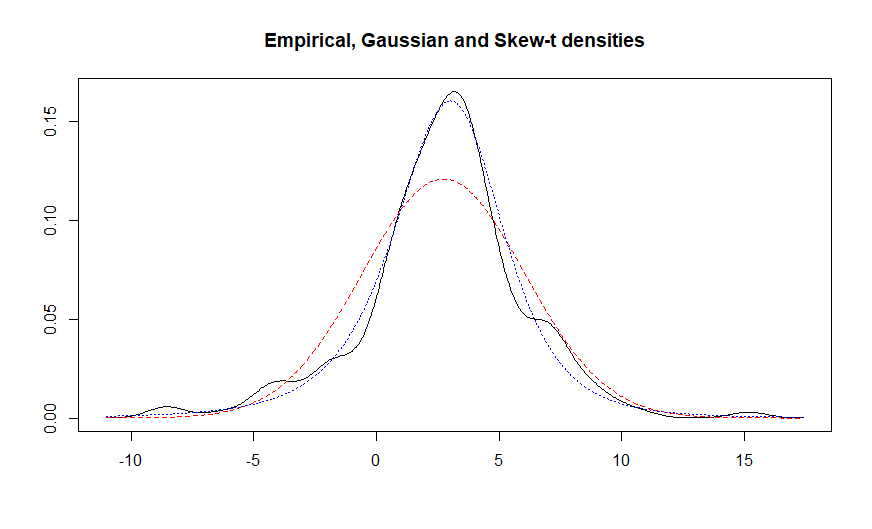 A lesson from this small exercise at the current juncture is that recession probabilities estimated using Gaussian models are likely to be largely under-estimated.