Today, we are pleased to present a guest contribution written by N.R. Ramirez-Rondan and Marco E. Terrones (Universidad del Pacifico).

There is well-established literature that documents the failure of the uncovered interest rate parity (UIP) condition. While a host of factors have been identified as possible reasons behind this result, the role of uncertainty is not fully understood. This column reports evidence that uncertainty is a key omitted threshold variable whose inclusion results in the UIP condition holding during low-uncertainty periods but does not during high-uncertainty periods.

Several factors have been identified as possible explanations for this puzzle:

In new research, we examine the relationship between macroeconomic uncertainty and the UIP condition using an extensive dataset for a sample of advanced and emerging market economies (see Ramirez-Rondan and Terrones, 2019). There is evidence that uncertainty influences key macroeconomic (aggregate saving and investment) and financial (financial and credit market conditions, and currency risk) variables. Thus, there is the possibility that uncertainty is an important omitted variable that could affect the Fama equation in non-linear ways. In particular, the econometric analysis postulates a panel threshold regression model and utilizes survey-based exchange rate expectations and news-based measures of macroeconomic uncertainty.

The UIP condition states that the returns in the local currency of an asset denominated in both local and foreign currency must be equal. Thus, the following ex-ante Fama regression equation should hold in a panel,

where the sub-index i and t+h refer to country i in period t+h; s-hat is the (log) survey-based exchange rate expectation;  i and  i* are the domestic and foreign interest rates for a fixed asset that matures in h periods;  is an unobserved country-specific fixed effect; and  is an error term. When the intercept α is equal to zero, and the slope β is equal to 1, then the UIP hypothesis holds in the data.

where qit  stands for macroeconomic uncertainty in country i, γ is the threshold parameter which needs to be estimated along with the other parameters in the regression equation, and 1(.) is the indicator function, which takes on the value of 1 if the inequality inside the bracket is true, and 0 otherwise.

We collect data for a sample of fourteen economies during 2003:1-2018:12. The country composition of this sample is determined by the availability of the macroeconomic uncertainty data.

Our baseline results suggest that: 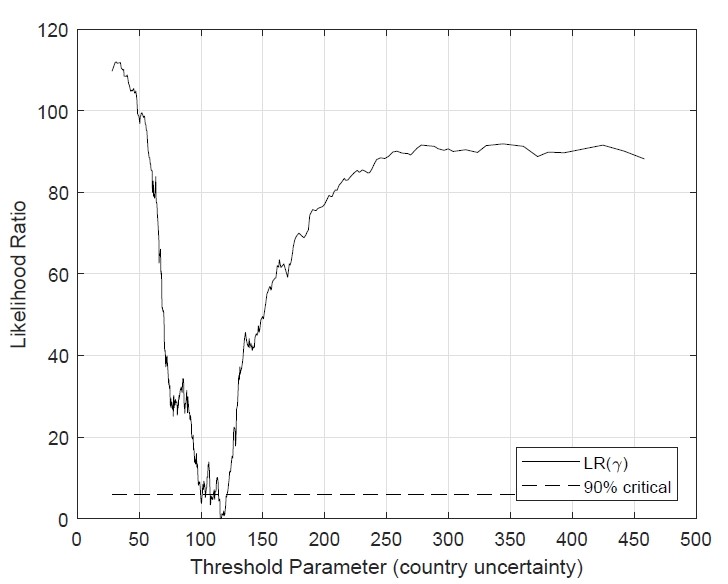 Are these findings robust?

We examine whether the inclusion in the threshold Fama regression model of other variables that might be related to the time-varying risk premium (such as capital controls, exchange rate flexibility, and terms of trade) affect the main findings above.

More research is, however, needed…

Why does UIP hold in low-uncertainty periods but not in high-uncertainty ones? The theoretical literature is virtually silent on this, and our findings suggest that this could be a fruitful area for research. There are, however, indications that macroeconomic uncertainty can affect financial market liquidity, the volume of assets traded, and excess returns in currency asset operations. These effects are likely associated with the time-varying risk premia, but little is known about the specific channels through which this happens.

This post written by N.R. Ramirez-Rondan and Marco E. Terrones.

9 thoughts on “Guest Contribution: “How Are Uncertainty and the Uncovered Interest Parity Condition Related?””