About 10% of the population in San Diego have now received the vaccine. A third of these — 100,000 people– were served by a single facility operated by the University of California at San Diego. What’s the secret to their success? Answer: logistics.

In pre-COVID days, a big theme park like Disneyland would welcome 50,000 visitors every day. The only way they could pull this off was by devoting tremendous planning and resources into the operational details of how and where the flow of people would go, anticipating where the bottlenecks would arise and mitigating them with advance planning. A constant stream of cars into Disneyland were directed by a small army of workers who would direct each car at each turn. The end result of this planning was that each car would seamlessly end up at its own particular pre-designated parking spot and each lot would fill up at the same pace as the nonstop inflow of new visitors. Similar attention to details of how you entered the park and got onto each ride made the whole thing work.

The UCSD vaccination drive-in superstation is located in the parking lot of the downtown ball park. Several dozen people direct incoming traffic to one of a dozen possible stations where an attendant checks i.d.’s, verifies that you’re there for a scheduled appointment, and asks a few medical questions. From there cars are directed into one of a number of different lines of a dozen cars each. Several specialists and a doctor again check with each individual in the line, at the end of which the doctor walks down the line administering a shot to each person. There is then a 15-minute waiting period to check for any immediate reactions, after which you’re back on the road. 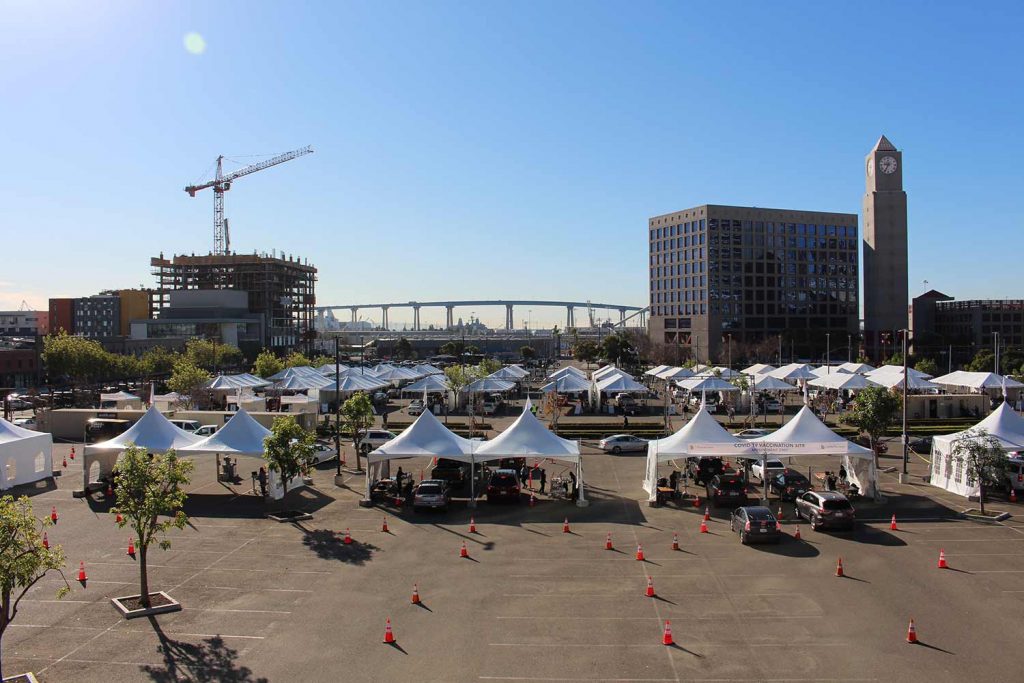 It takes a huge number of people, many of them volunteers, for this to work. Here’s how one volunteer explained how he felt about being part of an operation on this scale:

“I love it,” said Bernard Surovsky of Carmel Valley, who volunteered at the Petco Park site. “It just warms me up from inside when I hear that”.

Surovsky has seen the pandemic’s toll up close. His brother survived a bad bout of COVID-19 last spring and is now wheelchair-bound and struggles with paralysis and cognitive issues.

UCSD plans to open a second superstation next week. This one will be a walk-in clinic located on the UCSD campus, which could process an additional 5,000 people each day.