China has announced, through the third quarter, quarterly growth figures for 2021 that are far below its robust pre-pandemic trend. In the first half of 2021, published quarterly growth averaged an annual rate of 2.8 percent, but the pace slowed to an annual rate of just 0.8% in the third quarter. It is no surprise that these figures are well below the outsized growth rates in the final three quarters of 2020, when the economy grew at a 24 percent annual rate as it rebounded from the deep pandemic trough. The 2021 figures are also well below China’s pre-pandemic trend pace of around 6%.

In this Econbrowser article, we use a quarterly version of the FRBSF China Cyclical Activity Tracker (China CAT) to evaluate the recent pace of China’s slowdown. Chinn (2021) discusses inconsistencies between China’s reported quarter-to-quarter GDP growth (the figures we annualized and cited above) and other published GDP data. Moreover, several studies have raised broader concerns about the accuracy of China’s GDP data. Nakamura, et al (2016) find that official aggregate consumption data are “too smooth” relative to levels expected from standard theory. Pinovsky and Sala-i-Martin (2016) find that China’s reported GDP growth rate appears to be exceptionally high relative to its growth in light emissions, as measured from satellite data. Chen, Chen, Hsieh and Song (2019) use both value-added tax data and local indicators less conducive to manipulation and estimate that GDP growth from 2010-2016 was 1.8 percentage points lower than reported.

The FRBSF China CAT [Fernald, Hsu, and Spiegel (2021)] examines the accuracy of Chinese statistics using indices of economic activity, such as electricity, rail shipments, and industrial production, converted into weighted averages of data on a broad range of measures of economic activity in China. The statistical technique we use to create these weighted averages, known as principal components (PC), provides an index capturing as much of the variability as possible in the individual series.  Conceptually, this index is like the Chicago Fed National Activity Index (see, e.g., Brave 2008) for the United States.

To choose among the large number of possible combinations of indicators of activity, Fernald, Hsu, and Spiegel (2021) consider the relationship of various combinations of indicators with China’s real imports, as measured by trading-partner exports to China. For countries with reliable statistical agencies, real imports comove closely with real GDP. Importantly, our approach provides external validation, as trading-partner exports are not subject to manipulation or statistical error by Chinese authorities. (We estimate all relationships prior to the U.S.-China trade disputes of the late 2010s as well as the pandemic.)

The resulting China CAT series is updated quarterly, with the data and additional documentation (available on the Federal Reserve Bank of San Francisco web site). The series uses year-over-year data and has mean zero and unit standard deviation. (Hence, the series focuses on fluctuations, and is silent on whether the trend is appropriately measured.)

However, we are currently interested in the most recent turndown in China growth, and year-over-year data are heavily influenced by the substantial volatility in levels that occurred a year ago. Hence, we have now constructed a new quarter-on-quarter version of the China CAT, which we term the “QCAT”. Although the underlying series is normalized to have mean zero and unit standard deviation, we report them here in “GDP units,” by scaling by the standard deviation of GDP and adding back the estimated trend in reported GDP. 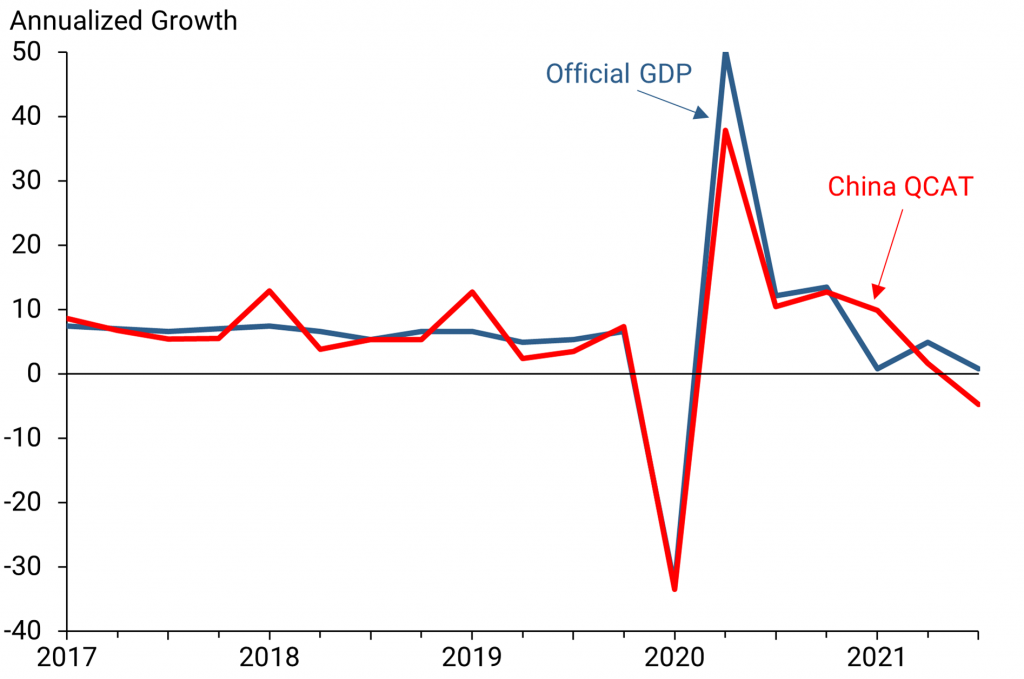 Our results are shown in the figure above. Prior to the pandemic, GDP was somewhat smoother than the QCAT value, consistent with the “excessive smoothness” of the published GDP data since 2013 (see Fernald et al, 2020).  But in 2020, during the most volatile period of the pandemic, the QCAT yields similar quarterly results to the official GDP growth figures.

However, we begin to see marked discrepancies in 2021. For the first quarter of this year, the QCAT corresponded to GDP growth of nearly 10% at an annual rate, well above the tepid 0.8% annualized official growth figure. But the QCAT for the second quarter comes in much lower, at 1.6% annualized, compared with the official figure of 4.8%. Most recently, in the third quarter, the QCAT is sharply negative, at -5%—only the second time since 2000 (when our data began), apart from the pandemic, that China’s GDP growth has been negative (the other being -4% growth in the fourth quarter of 2008, during the Great Recession). The official third-quarter figure, while weak, was still positive, albeit under 1%.

Among the individual components of the QCAT, growth was particularly low for freight and retail growth during the quarter, corresponding to GDP growth of -6.1% and -5.9% respectively. There were brighter spots, such as fixed asset investment, which entered with growth 1.9% above trend. Yet, more recent figures for October and November show a net decline in fixed asset investment over those months.

Prior to the pandemic, the China CAT index of non-GDP indicators suggested published GDP was “excessively smooth.” Nevertheless, during the worst of the pandemic in 2020, our quarterly QCAT tracked quarterly GDP closely.

However, in the second and third quarters of 2021, a notable gap has opened up: non-GDP indicators, as captured by the QCAT, appear much more concerning than the (already weak) GDP figures. In fact, the QCAT suggests that China’s economy is actually contracting. These findings are broadly consistent with Chinn (2021), who also finds evidence that, with typical seasonal adjustment methods, other published GDP data for China imply negative growth in the third quarter.  In this light, perhaps it is no surprise that China recently announced measures to provide additional monetary stimulus through cuts in required reserve ratios, even as other central banks around the world move towards tightening.

John G. Fernald is a senior research advisor in the Economic Research Department of the Federal Reserve Bank of San Francisco and professor of economics at INSEAD.

Jack Mueller is a research associate in the Economic Research Department of the Federal Reserve Bank of San Francisco.

Mark M. Spiegel is a senior policy advisor in the Economic Research Department of the Federal Reserve Bank of San Francisco.

Chinn, Menzie, 2021.“The Extent and Implications of the China Slowdown.“ Econbrowser, October 25, 2021. http://econbrowser.com/archives/2021/10/the-extent-and-implications-of-the-china-slowdown.