From an Independent Review article by Emre Kuvvet:

…research and speeches by the Fed economists are increasingly focused on climate change, gender, race, and inequality (Toomey 2021). Regional Federal Reserve banks and the Board of Governors of the Federal Reserve have conducted numerous seminars and conferences and published research papers on politically charged topics.

I wondered about how damning this statement is. Clearly former Senator Toomey is incensed. The Federal Reserve is charged with conducting monetary policy, but is also partly responsible for the regulation of the financial system. It would seem to me that climate change (increased incidence of climatological events, resulting in economic damage and challenges for insurers) would be a no-brainer for concern. Inequality is something that has impacts upon the transmission of monetary policy (think about wealth inequality, or access to financial services like banking). What about gender and race? We know that pay varies by gender and race, and cannot be explained away fully by other covariates like education; shouldn’t we be interested in whether markets are well functioning, in order to see if either monetary policy is working effectively across demographic groups. At the very least, it’s interesting that — for instance — women usually have higher assessments of inflation than men do. I don’t think it’s a dangerous thing to investigate a phenomenon like that.

Another point that Dr. Kuvvet makes is that the Fed is Democratic biased, and even more so than the general economics profession (I’m talking about rank-and-file economists, not those in leadership like Board governors). I certainly wonder about the comparison with the general economics profession — surely it must depend on the boundaries placed on “the economics profession”; I’m also curious about the statistical significance (Kuvvet reports point estimates for ratios of Democrats/Republicans, but one would want to know what the confidence intervals are for the ratio in the general profession, and for the Fed overall, and see whether the confidence intervals overlap).  But I would also expect that Fed economists lean more Democratic than Republican, and more so over time. After all, Republicans have moved away from many of the orthodoxies of their past, like balanced budgets, central bank independence, liberalized trade policy, and in the Trump era, belief in data and expertise. In that environment, I would expect a flight from the Republican party, as in e.g., Zingher (2020) (although not, as I stressed, conservative economic thought).

In any case, here’s the data Kuvvet compiles regarding affiliations for the Federal Reserve Board, and seven of the 12 regional Fed banks (SF, Dallas, Philadelphia, Boston, Atlanta, NY, Cleveland; missing are St. Louis, Kansas City, Minneapolis, Richmond, and Chicago). 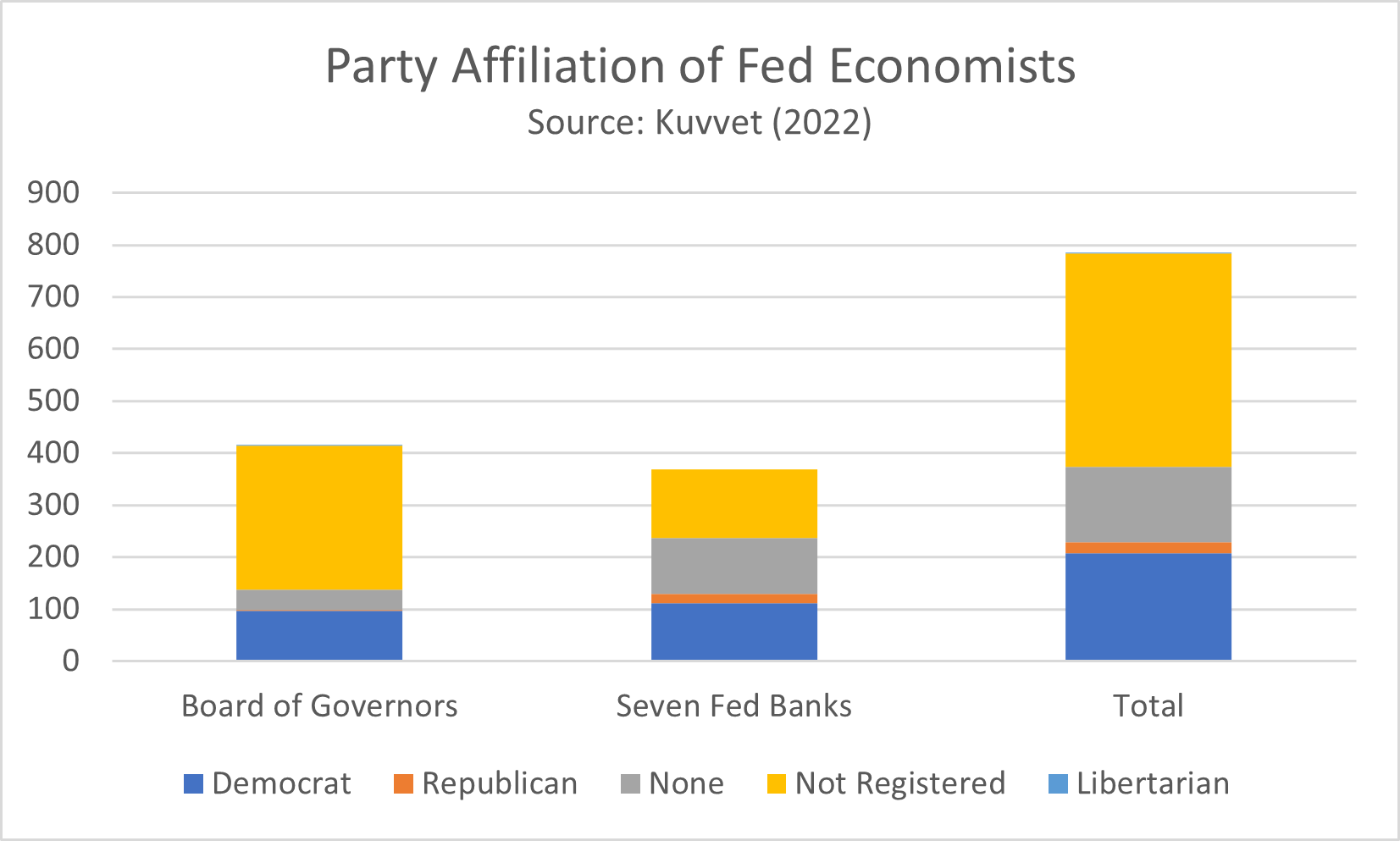 I must say, looking at Kuvvet’s Table 2 and the graphic derived, it seems to me that there is some uncertainty regarding partisan affinities. Looking at the Board of Governors in Washington DC, one can see the largest category is “Not registered”. This is true for the total over the Board and seven of the 12 regional Fed banks. If there is political homogeneity I’m hard pressed to see it in these statistics as reported.

I am also hard pressed to see the increasing homogeneity over time, from personal experience. 32 years ago, I interviewed at the Board, and two Federal Reserve Banks. That’s not an incredibly big sample, but at least I have a sample. I was struck by how much homogeneity there was, at least in terms of economic arguments and worldviews (I never asked about politics, obviously, so don’t know about that). It was also very homogenous ethnically and racially. It is difficult for me to see how homogeneity has increased in the intervening 32 years.

Speaking of partisan affinities and worldviews, ever wonder who who thought up staggered contracts, which is a key concept of New Keynesian economics? One of them was John Taylor. Ever wonder who brought up menu costs as a component of New Keynesian economics? Greg Mankiw  [until 2019 — correction h/t Charles Engel]. I’m pretty sure both remain Republicans. [MDC 1/23, 7pm] http://gregmankiw.blogspot.com/2019/10/i-am-no-long-republican.html

DoD has a report, Climate Risk Analysis (2021 edition). Should I wonder about the political affiliations of defense officials affecting their views on global climate change, and its importance to safeguarding American national security. See more here, and here.