High commodity prices and indications of rising inflation have renewed interest in the hypothesis that the U.S. has been increasing the money supply in recent years at an excessive rate.

One of the measures of the money supply that has been most closely followed by economists is M2, which is calculated at any point in time by adding together the value of cash held by the public, checkable deposits, household savings deposits, small time deposits, and money market mutual funds. Although any given year’s growth rate in M2 may be wildly different from inflation, the average growth rate of M2 over a ten-year period historically tended to correspond pretty closely to the ten-year average growth rate of nominal GNP, as displayed in this graph of over a century’s worth of data by William Dewald: 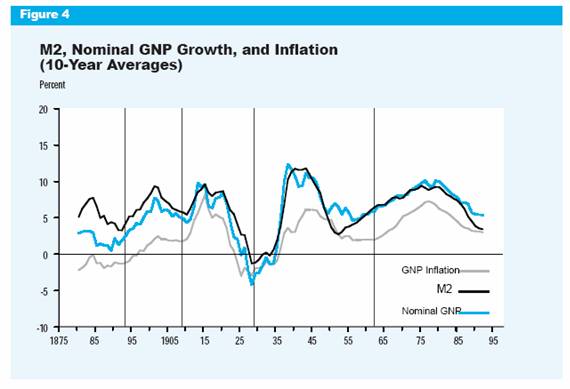 The growth rate of nominal GNP is the sum of inflation plus the growth of real GNP. Thus the above graph suggests that over time, growth of M2 that is higher than the growth of real output shows up as inflation. Moreover, ten-year averages of real growth rates do not exhibit nearly as much fluctuation as these nominal series. It accordingly seems reasonable to attribute the surge in U.S. inflation in the 1970s primarily to the surge in money growth.

The graph below updates Dewald’s analysis with data through 2005. The hundred-year relationship broke down a bit in the 1990s, as the dramatic slowdown in M2 growth in 1994-95 did not reduce the growth of nominal GDP by as great an extent. The instability of the historical correlation led many economists to put less weight on monetary aggregates as a predictor of inflation and economic activity.

Measuring the money supply is conceptually very difficult, particularly given the many changes in payments technology and financial instruments. For example, consumers may have shifted some of the assets previously held in M2-type accounts into bond and stock mutual funds during the 1990s.

It is of course more interesting, though also more hazardous, to look at money growth rates more than once a decade. The graph below displays U.S. M2 growth averaged over a 3-year period ending with the indicated date. From 1999-2004, these three-year averages amounted to 6 or 7% annual money growth. Given a 3.5% real growth rate, that would be consistent with a 2.5-3.5% inflation rate, of which there also may be some indication in the most recent PCE deflator and CPI.

On the other hand, such money growth would not be expected to produce the sort of runaway inflation that some commentators think they detect in commodity prices. Furthermore, the 5% M2 growth rate of the last three years would be the sort of thing to get the economy back on track to a 1.5% inflation rate.

Obviously M2 is a pretty noisy indicator if you have to look to 10-year averages, and even then be careful. Nevertheless, it confirms a picture that I think emerges from any of a number of other indicators: the Fed was a little too aggressively expansionary a few years ago. That may have been responsible for a slight increase we’re seeing now in current inflation. However, the more restrictive measures adopted by the Fed over the last three years should help keep future inflation at acceptable levels.

6 thoughts on “M2 and inflation”