I just attended a conference at my former institution, UC-Santa Cruz. The conference, organized by SCCIE, SF Fed, and the EC Delegation to the USA, and ZEI, entitled “The euro and the dollar in a globalized economy.”

Since the papers represented some recent thinking on the implications of some recent developments in the world economy, I thought it might be interesting to recount some of the main issues. (Note that the standard disclaimer applies; while some of the participants are employed by central banks or governmental/intergovernmental institutions, none of the views conveyed in the papers necessarily represent the views of the respective institutions. In particular “The views expressed are solely the responsibility of the authors and may not, in any circumstances, be regarded as stating an official position of the Commission of the European Communities.”)

The day began with a paper by myself and Jeff Frankel, attempting to isolate the conditions under which the euro would surpass the dollar as the world’s key reserve currency. Briefly, the paper concludes that the euro will only supplant the dollar in a convincing way if the UK joins EMU and the dollar stays at its 2004 level, or the dollar depreciates over the next 20 years at the (rapid) rate of depreciation experienced during the 2001-04 period. I stressed that since these were fairly extreme scenarios (depicted in Figure 1 below), the likelihood that dollar dominance would end was fairly small.

Figure 1: An “extreme” example, Figure 12: Case 4, Scenario D, Simulation of “UK entry” and continued depreciation of the exchange rate at the 2001-04 rate. Source: Chinn and Frankel


The second paper reported new results obtained by Linda Goldberg and Cedric Tille regarding exchange rate pass through. The authors find that pass through is much less pronounced in US imports than in US exports, and they attribute this phenomenon in part to the substantial invoicing in US dollars. That characteristic of US trade makes it less likely for dollar prices to be adjusted in response to changes in the value of the dollar. Perhaps the most interesting conclusion they make is that dollar depreciation is expansionary for countries that invoice their (non-US) trade in US dollars. The figure below depicts the shares of dollar invoicing for certain country exports. 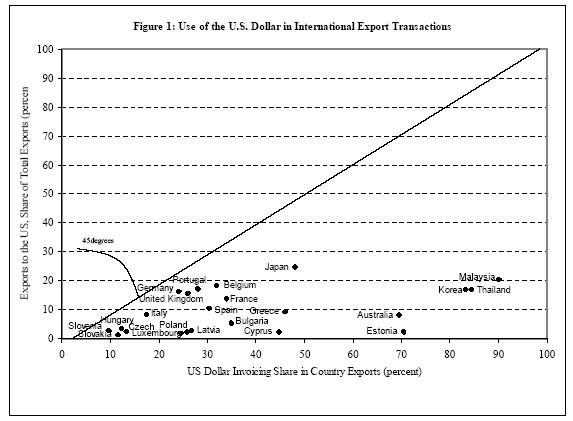 
In Kathryn Dominguez’s paper on the ECB, the euro and global financial markets, the past few years experience was recounted. Dominguez noted that one large benefit of EMU was — especially for the countries that had previously endured high borrowing costs — the convergence of government bond rates, depicted in Figure 3. This phenomenon had occurred despite the wide variation in fiscal budget deficit and debt conditions. On the other hand, concern was voiced over how well the decentralized aspect of the European Monetary System would serve policymakers in the event of some type of financial crisis. In particular, she noted that the ECB did not have a lender of last resort function, in contrast to the Fed. 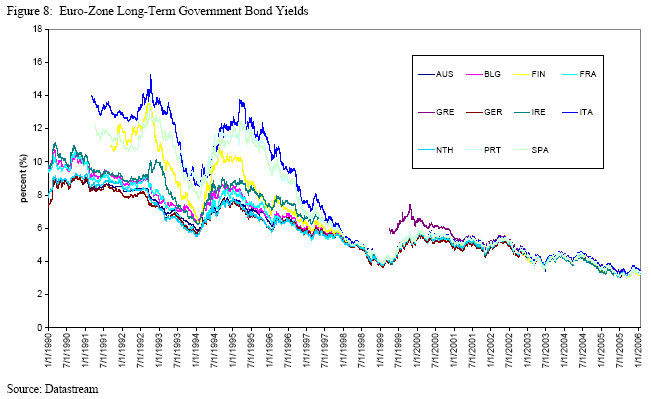 Frank Smets of the ECB presented results from a statistical (structural vector autoregression, or SVAR) model of the US net trade balance. As shown in Figure 4, his model results indicated that a large proportion of the deterioration in the US trade deficit could be attributable to the acceleration in US multifactor productivity. 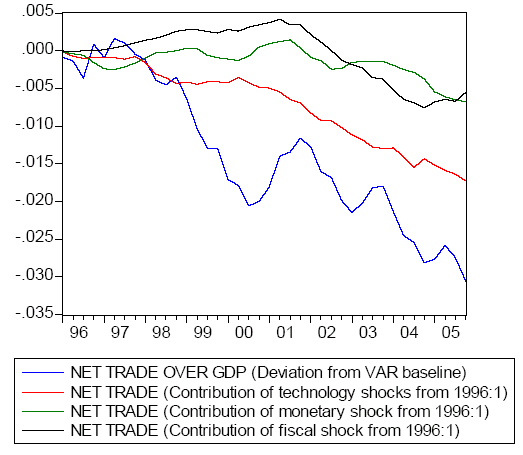 
The discussant Helen Popper observed that the results were interesting, but questioned why the VAR contained only US variables. That is, what is the role of the rest of the world in determining the US trade deficit, especially rest-of-world productivity trends.

The impact of exchange rate changes and asset price changes on the US Net International Investment Position is examined in the paper by Cedric Tille. The fact that most of US assets abroad are denominated in foreign currency, and most US liabilities in dollars are in US dollars, means that the depreciation in 2001-04 provided the US some slack. That is, as shown in Figure 5, despite running large current account deficits over these years, the NIIP failed to deteriorate. He then proceeded to examine how monetary policy affects the NIIP in a formal model, allowing for these valuation effects. 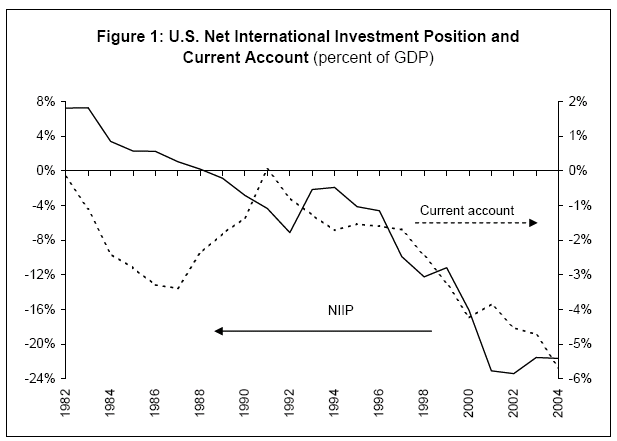 
The evening keynote address by SF Fed President Janet Yellen, entitled “Monetary policy in a global environment”, critically assessed the thesis that globalization had altered the Phillips curve to such an extent that it necessitates modification of the Fed’s framework for conducting policy analysis.

To preview my conclusions, some very tentative evidence supports the proposition that increasing global capacity, on balance, has held inflation down over the last decade. But, the magnitude of the dampening effect appears to be modest, and exchange rate fluctuations, possibly related to other shocks, have played a significant role. There is also evidence that the (price-price) Phillips curve has become flatter — a phenomenon that may be related to globalization.

With respect to monetary policy, I find nothing either in theory or the existing empirical evidence to overturn the conclusion that a country like the United States, operating under a flexible exchange rate regime, can ultimately achieve the inflation target of its choice. That said, global factors may impact inflation in the medium term, just as higher productivity growth is now widely recognized to have put downward pressure on inflation during the second half of the 1990s. And insofar as globalization has affected the dynamics of inflation — through changes in the slope of the Phillips curve or the NAIRU (non-accelerating inflation rate of unemployment) — it may require some recalibration of policy responses.

5 thoughts on “The Euro, the Dollar and Globalization”