As the Fed drops interest rates, I’ve been trying to sort out all the channels that monetary policy will affect output, and which ones are likely to be short circuited this time around.

Paul Krugman observes that changing interest rates might not work on housing when the stock of housing is out of line with the fundamentals. Robert Reich says bank asset portfolios are too risky to allow expanded lending in response to increases in money base. Thomas Palley argues contractual rigidities (resets in adjustable rate mortgages) reduce the impact of interest rate changes. Another line of argument can be summarized by the following question: after the dot.com boom and the housing boom, what other sector can monetary policy influence?

When I face a welter of arguments, all of which have some plausibility, I do what a typical teacher does — reach for a textbook. In particular, I’m going to look for guidance in Figure 3 in Chapter 23 from Mishkin’s textbook. 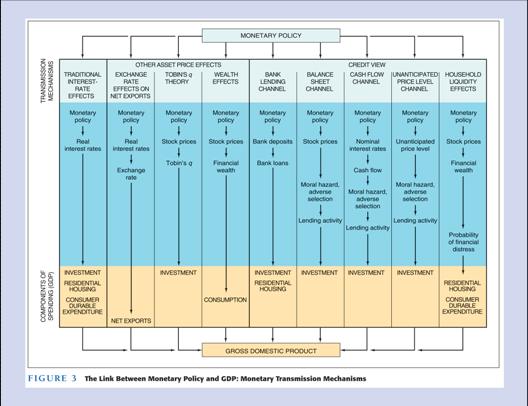 
The first column is what I would call the neoclassical channel. A reduced nominal interest rate, in the presence of nominal price rigidities, results in a lower real interest rate. This changes the optimal stock of capital, resulting (with adjustment costs) in higher investment until the new optimal capital stock (either business or housing) is achieved. This approach is applied here, in the context of housing.

The second channel is the expenditure switching channel that I’ve examined previously here and here. That is, a depreciated exchange rate induces greater exports and less imports.

The third channel — the q-theory approach — could equally be viewed as a neoclassical approach, depending upon the formulation. I would say the emphasis is different, viewing the incentive to invest from the ratio of the market price versus book price of physical capital as the driving force. A lower nominal (and hence real) interest rate drives up the present value of the stream of returns to a unit of capital, and hence stock prices. I think of this approach as the quintessential approach to modeling monetary policy impacts upon investment for firms that do not face pecking order financing heirarchies arising from asymmetric information (i.e., large firms with lots of cash flow); see one survey here.

I think the channels under the “credit view” are the ones that bear deeper examination in the current episode, when thinking about how effective monetary policy is going to be. In particular, the bank lending channel is going to be much more circumscribed this time around. Usually, as the Fed engages in open market operations, banks have an incentive to lend in order to get rid of non-interest-bearing excess reserves. However, as bank capital has been hit hard by write-downs of CDOs, banks are experiencing a capital crunch, such that lending cannot be expanded, given capital requirements. This is a very cursory explanation, but there’s been plenty of discussion of this point in the wake of Jan Hatzius’s note. (Here’s the credit crunch in commercial real estate, via CR)

Finally, the second to last channel — the unanticipated price channel effect — is a channel nobody is pointing to. That’s because repeated exploitation of this channel would imply erosion of hard-won monetary credibility over the past decades. But that doesn’t mean that this channel won’t be operative.

Unanticipated price increases can have an impact because firms have debt denominated in nominal terms, while firm assets often take the form of physical capital. Of course, while firms with net (nominal) debt may gain, creditors may lose. The impact on overall investment spending will depend upon the patterns of net debt, and the investment propensities of the firms.

(Digression: where does the current intra-financial sector logjam [1] show up in this diagram? I don’t think it does, explicitly. However, to the extent that all financial institutions are less likely to lend to each other, I presume they will tend to hold more excess reserves, and thus lend less (i.e., the lending channel is further diminished). Greater uncertainty about the long term prospects of major banks should also make it more difficult to raise new capital, exacerbating the capital crunch.)

What is the (policy) upshot of this discussion? In answer to the question of which sector can fulfill the role previously filled by housing, I would say the only candidate is net exports. The decline in the Fed Funds rate has led to a depreciation of the dollar. In the future, net exports will be higher than they otherwise would be. However, the behavior of net exports, unlike other components of aggregate demand, depends substantially on what happens in other economies. If policy rates decline in the UK, the euro area, and elsewhere, additional declines of the dollar might not occur. (And as I’ve pointed out before, if rest-of-world GDP growth declines (as seems likely [2]), then net exports might decline even with a weakened dollar).

I think the main point is that the decreases in interest rates, working through the traditional channels, will have a positive impact on components of aggregate demand. With respect to the credit view channels, the impact on lending is going to be quite muted, I think, given the supply of credit is likely to be limited. In fact, I suspect monetary policy will only be mitigating the negative effects of slowing growth and a reduction of perceived asset values working their way through the system.

16 thoughts on “Thinking about Monetary Policy Efficacy: Back to the Textbooks”