As we near the end of the year, and the end of eight years of Bush economic policy, I think it’s useful to look back. The White House has recently tangled with the NYT regarding what got us into the current economic crisis [0] (see also [1]). This comes on the heels of the Paulson argument that he would not have done anything different, had he known the full extent of the looming crisis. This leads me to wonder how we should view the Bush Administration’s stewardship of the economy. 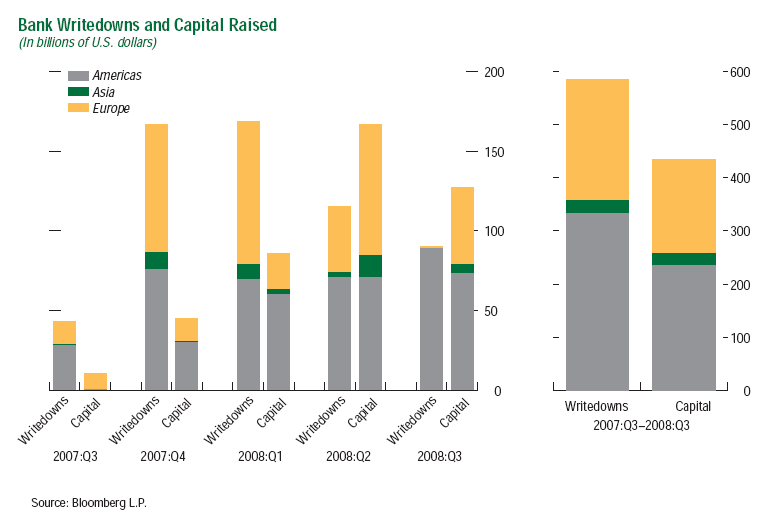 In particular, when one examines the mixture of policies and events that have led us to the brink of possibly the deepest and most persistent downturn since the Great Depression, one can see several suspects listed.

I’ve already dealt with the first two “betes noire” — favorite villains in the fevered commentary of certain noneconomists — in this post, so we can dispense with these as key drivers (Jim attributes some blame, here, although I don’t think he attributes central blame here either). I don’t think CDO’s and CDS’s in and of themselves caused the crisis, although they certainly obscured the primary problem of overleveraging (CDO’s) and lack of transparency (CDS’s). And the saving glut — well, the saving glut was a worldwide phenomenon, but I think it safe to say the countries that did and didn’t borrow from the Chinese have suffered in the current crisis (here is my critique from 2005; CFR report [pdf]).

So what I want to think about is the toxic mixture of the last five items, which interacted in a synergistic manner to place us in the situation we are now in.

First, monetary policy. While there seems to be a widespread consensus that it was too lax in 2002-04, this is a viewpoint made with the benefit of hindsight. As Orphanides and Wieland (2007) [pdf] have pointed out, according to the Greenbook forecasts, monetary policy was not — according to a Taylor rule framework — overly lax.

Second, deregulation. On this front, I think it’s important to not indict all deregulation (eliminating the Glass-Steagall barriers makes sense to me, while the Phil Gramm-sponsored Commodity Futures Modernization Act exemption of regulation of CDS’s does not). I outline some empirical research on what factors were important in this crisis in this post.

Third, regulatory disarmament/nonenforcement and “criminal activity”. I would have discounted this item in the absence of clear evidence, but now that we know about how the OTS “helped out” IndyMac [2] [3], I think we can be reasonably confident that we’ll hear a lot more about how deregulatory zeal [4] [5] metastatized over into criminal activities on the part of regulators and the regulated.

Fourth, fiscal profligacy via tax cuts. I think it’s important to focus on profligacy (because it pushed the economy more into a boom exactly at a time when not needed) and on tax cuts (because it made people feel like they had more discretionary income than reasonable), thereby pushing the asset boom.

Fifth, tax policy. In particular, I have been thinking about the tax deductibility on second homes, a provision dating back to 1997 [6] [7] [8]. (I’ve been thinking about this in part because mortgage deductibility on a second home never made sense to me, let alone on a first home). Capital Games and Gains has pointed out this provision, citing a NYT article. But even this last article doesn’t locate primary blame here; rather it’s cited as a contributing factor. I suspect that on its own, this provision wouldn’t had a big impact, but in combination, it might have. My caveat here is that I haven’t found much empirical work backing a big role for this factor.

Typically, in my academic work, I would think of these factors adding up in a linear fashion, so that each of the impulses would sum to the total effect. But (departing from a model, and with no econometric work to back up the hypothesis interactive effects), I think it’s worthwhile to think about lax monetary policy, deregulatory zeal and criminal activity/regulatory disarmament, and tax cuts and tax policy changes, all combining to lead to the “bubble” (in a nontechnical sense) we’ve witnessed, the deflation of which has been associated with the ongoing financial crisis.

I won’t claim to have foreseen the full enormity of the crisis we’re now undergoing. As I indicated when I posted my first blogpost some three years ago, I thought the sheer irresponsibility of the fiscal policy being pursued, against a backdrop of overconfidence in largely nontraded derivatives, would lead to grief in the form of a “sudden stop” of net capital flows to the US. In this respect, I was wrong — what we’ve achieved instead is a sort of “global sudden stop” where the process of deleveraging proceeded in a discrete (and “disorderly”) fashion. So, unlike some, I was only partially — not completely — blindsided. (And, I’m sure Akerlof and Romer were completely aware of what was coming…)

I believe history will look critically on the Bush Administration’s economic stewardship, in particular how the policies propelled an unsustainable bubble, and tied our hands in the use of fiscal policy tools. In sum, I think Kevin (Dow 36,000) Hassett’s view “Bush’s Legacy May End Up Better Than You Think” will not prove true.