The WSJ and Philadelphia Fed surveys of economists were released last week. It’s of interest to consider what they imply for the macro outlook, and additionally, how they believe inflation will evolve as a function of other variables.

Because the WSJ and SPF forecast mean are essentially the same for GDP, I’ll focus on the WSJ forecasts. Figure 1 depicts the forecast mean, and trimmed high and low forecasts (where trimming is based on the five quarter growth rates).


Forecasters predict continued growth. However, there is some dispersion of forecasts. Moreover, while growth is predicted to continue, it will not be at such a pace to quickly close the output gap.


Figure 2 indicates that by 2012Q2, forecasters are projecting output at 3.8% below CBO projected potential GDP (in log terms). The trimmed high is 3% below, while the trimmed low is 4.5% below. Even a 3% output gap by mid 2012 is substantial, and suggests to me that policymakers need to be extremely circumspect about tightening policy over-rapidly.

These forecasts are conditional upon certain policy measures. One of those is monetary policy; here it is of interest to note what monetary policy is assumed to do.


What is interesting to me is the fairly gradual upward trajectory for the ten year interest rate — and how those projected interest rates compare against those earlier in the decade.

I can understand how some people might ask how interest rates can be so low with such a large budget deficit. But in a loanable funds framework, saving and demand for total credit determines the price of bonds, and as long as private demand for credit is depressed (consistent with a 3% output gap), real rates should remain relatively low. Shocks to risk appetite could also induce flight to US Treasurys.

An alternative interpretation of these rising interest rates is that inflation is expected to rise, despite the fact that Treasury-TIPS spreads and other measures of expected inflation [0] exhibit muted pressures. The short to medium term inflation expectations are also muted in the WSJ survey:

One interesting question, given the pervasive (among some circles) belief that hyperinflation is just around the corner, is what determines inflation. The Phillips curve posits current inflation is a function of expected inflation, the output gap, and input price shocks.

Where π is inflation, the e superscript denotes expected, (yt-y*t) is the output gap, and Z is a function of the growth rate of input prices. For average inflation rates close to zero, the expected inflation term can be approximated by zero.

The WSJ survey does not contain an estimate of the output gap, but one can take a look at how forecasted inflation rate over the next year correlates against the forecasted growth rate of GDP:

Where Δ yt is the average q/q growth rate, and ΔPoilt is the change in the average price relative to $100, and bold coefficients are statistically significant at the 10% msl. In words, most business economists believe more rapid growth is associated with higher inflation. It’s possible that it’s monetary policy that is believed to drive both growth and inflation jointly (of course, that would be inconsistent with what has often been characterized as a Keynesian view of the world, but consistency and familiarity with data is not a strong point amongst those who are most worried about hyperinflation [1]).

Proxying the looseness of Fed policy by average Fed funds rate in 2011, one finds there is no link of looseness with higher inflation in 2011-2012. In fact, it is the reverse; in a OLS regression, higher average expected inflation in 2012 is associated with tighter policy in 2011, significant at the 5% msl (and with higher increase in oil prices). (The adj-R2 = 0.12.)


In other words, expected inflation does not appear to be primarily a function of loose monetary policy. Rather, it appears to be driven by factors consistent with a Phillips curve relationship obtaining.

Economists in the business sector tend to have a view of the world consistent with an expectations and supply augmented Phillips curve, and inconsistent with a strict monetarist/Quantity theory view (or a strict real business cycle view).

Figure 7: Quarter in which Fed begins raising the Fed funds rate (blue bars) and when the Fed begins exiting quantitative easing by allowing “mortgage-backed securities to mature without being reinvested.” Source: WSJ May 2011 survey.


The modal quarter for QE exit is 2011Q4, while that for Fed funds tightening in 2012Q1. I can see how these dates can be rationalized within the context of a sustained, albeit moderate, recovery in GDP. However, I worry about overly rapid tightening against a backdrop of ill-advised over rapid tightening of fiscal policy.

This is particularly important to recall, in this time of fears of debt accumulation, that much of the accumulation of debt as a share of GDP occurs because of Bush era fiscal policies and the economic downturn, as highlighted by the CBPP: 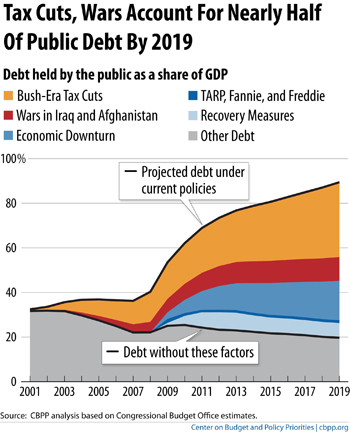 
One can see that a large chunk of the debt accumulation is attributable to the 2001 and 2003 tax cuts. The economic downturn is another key contributor.

As Aizenman and Pasricha observed, the fiscal stimulus merely offset the Contractionary effect emanating from the state and local government spending cuts and tax increases. The proposals to cut spending out of the next fiscal year’s budget, without addressing out-year spending and revenue, will merely increase the dark blue component (“economic downturn”) in the above graph.

The WSJ economists (not a notably liberal group, when it comes to economics) also do not appear to be strong adherents of the “expansionary fiscal contraction” view (see my views here and here). In the March survey, the response to the question “Will cutting the federal budget by an annualized $100 billion this year help or hurt economic growth over the next two years?”, was roughly 50-50. My favorite quote was “Claims that cuts are stimulative in the short run are nonsense.” I think we should take this comment to heart, as we wonder if oil prices and other shocks might push us below “stall speed”.

25 thoughts on “Forecasts: What and How Do Business Economists Think?”