The CBO recently released a document that places our current policy dilemma in context (Changes in CBO’s Baseline Projections Since January 2001, June 7, 2012).

The fiscal cliff refers to the end of several tax provisions and the implementation of the sequester which will amount to some 5% of GDP, and assuming plausible fiscal multipliers, will result in a recession in 2013. [1] The CBO prediction of a short, sharp recession is predicated on relatively rapid growth in the absence of the fiscal cliff. It is useful to recall why there is a conflict between stimulus, and fiscal constraint, at least in some people’s eyes. It has to do with the inherited deficit. Figure 1 shows the composition of changes in the budget balance, going from the January 2001 to January 2012 projections. 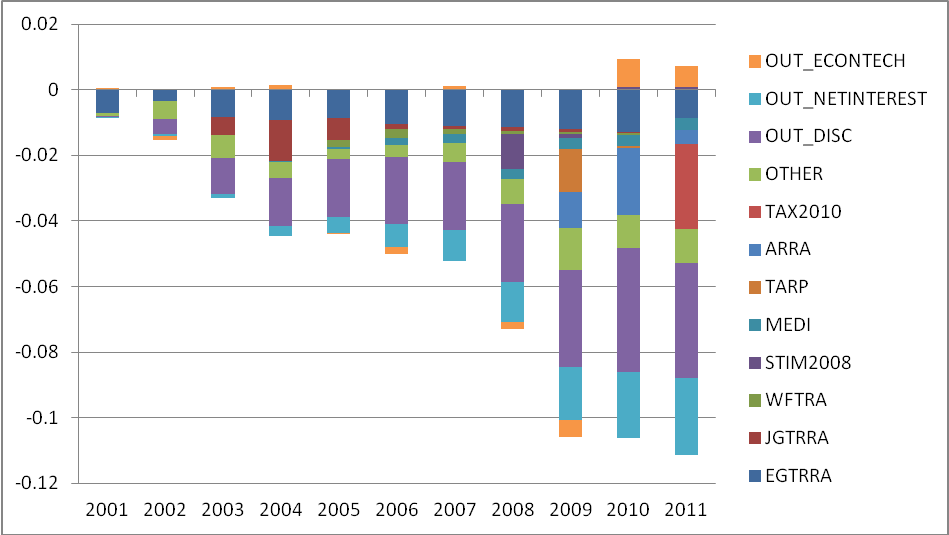 Figure 1: Changes in budget balance, in percentage points of GDP, from January 2001 to January 2012. EGTRRA is the 2001 tax cut, JGTRRA is the 2003 tax cut, WFTRA is the “Working Families Tax Relief Act”, STIM2008 is the 2008 stimulus package, MEDI is the Medicare Part D legislation, TARP is the Troubled Asset Relief Program, ARRA is the American Recovery and Relief Act, TAX2010 is the 2010 tax act, OTHER is other revenue and outlay measures, OUT_DISC is discretionary outlays, OUT_NETINTEREST is net interest, and OUT_ECONTECH is economic and technical changes. All divided by nominal GDP. Source: CBO, Changes in CBO’s Baseline Projections Since January 2001 (June 7, 2010), BEA, and author’s calculations.


The tax cuts accounted for a large share of the deficits through the 2000’s, and even in 2010, accounted for 1.3 percentage points increase in the deficit. In 2011, the extension of the EGTRRA meant that the Bush tax cuts lived on (in red, under TAX2010). Had the President’s proposal been implemented, the red block would have been about half the size shown (see Table 1-3 of CBO, An Analysis of the President’s Budgetary
Proposals for Fiscal Year 2011 (March 2010); the red block is $391 billion).

For FY2013, Deutsche Bank estimates the total extension of the Bush tax cuts would amount to approximately $250 billion; extending the tax cuts only to those with household income below $250K would cost only $100 billion (Source: DB, The US Fiscal Challenge, June 24, 2012).

Another major category is discretionary outlays (light purple). In 2007, slightly under half (47%) of this category was accounted by Iraq alone. [2] The cumulative cost of Iraq operations, ex.-debt service, through FY2012 is $807 billion, as shown in Figure 2.

Figure 2: Cumulative direct costs, in current dollars by fiscal year, in the Iraq theater of operations (“Operation Iraqi Freedom”). Does not include resulting debt service. Source: Amy Belasco, “The Cost of Iraq, Afghanistan, and Other
Global War on Terror Operations Since 9/11,” RL33110, Congressional Research Service, March 29, 2011, Table 3. Data for FY2011 is for continuing resolution, for 2012 is Administration FY2012 request.


As I observed in 2005, irresponsible tax cuts and wars of choice would constrain our future fiscal policy options should a serious downturn arise. [3] [4] And the dilemma posed by the fiscal cliff is the concrete manifestation of that prediction.

71 thoughts on “The Fiscal Cliff, and the Enduring Legacy of EGTRRA/JGTRRA and a Certain Discretionary Spending Measure Starting in 2003”