The paperback edition of Lost Decades (W.W. Norton) is to be officially released October 1st. This seems as appropriate a juncture as any to assess the predictions Jeffry Frieden and I wrote almost two years ago. 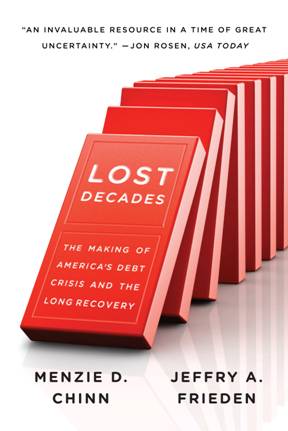 In the conclusion we wrote:

… Empty homes and unemployed workers testify to the past decade’s foolhardy experiment in excessive deregulation, excessive deficits, and excessive borrowing. Private and public interests are not the same, and their divergence has been demonstrated at great cost to America, and to the world.


Americans face serious economic challenges. They lost the first decade of the century to a boom that enriched the wealthiest, and a subsequent bust that impoverished the rest. Now they risk losing another decade to an incomplete recovery and economic stagnation. None of the changes necessary to avoid a repeat of this disaster will be easy. At every turn there are major political obstacles. Financial interests resist regulations that shift the burden of risky behavior back onto them and off of taxpayers. Beneficiaries of government programs fight against attempts to curb their benefits. Taxpayers refuse to pay the taxes needed to pay for the programs they want.


Partisan politicians block reasoned discussion, suggesting absurd pseudo-solutions instead of realistic alternatives. Ideologues and political opportunists encourage Americans to cling to the childish things that have served them so poorly in the past: a mindless belief that markets are perfect, that tax cuts solve every ill, that borrowing is to be encouraged. Despite the great trouble these policies have caused, their attractions continue to be touted and spouted by unprincipled pundits.

At the time we wrote those words in August 2010, we were hopeful that reasonable minds would prevail, despite the demagogic statements about “death panels” [0], demands that the government “get their hands off Medicaid” [1] and fears about hyperinflation [2] and/or crowding out [3]. But since then, we have seen a proliferation of frankly even crazier ideas sure to sabotage the nation’s future.

For instance, there is the belief that by cutting the level of government spending, magically the productive powers of entrepreneurs will be unleashed, such that the economy grows. In policy publications, this view was exemplified in the fantastical Joint Economic Committee-Republican study on the subject of expansionary fiscal contractions. Those views were propagated despite the fact that the evidence for expansionary fiscal contractions is almost nonexistent [4]. For those of us who believe that data can help inform public policy formulation, that lack of appeal to empirical evidence is perhaps the most profoundly depressing aspects of recent debates.

There are two ways to interpret these developments. The first is that there exist true believers. Expansionary fiscal contraction, extraordinarily high labor and capital supply elasticities, neoclassical financial markets, are all articles of faith. The second is that the promulgation of these ideas and accompanying policies are merely cynical ploys to achieve other aims: Demands to cut government spending in the name of “fiscal responsibility” are merely a cover for an agenda to shrink the size of government; else tax revenue increases would be a reasonable measure.

For my part, I am of the belief that most of the policymakers who make these claims actually know better. Many politicians espouse such views only because of short term expediency; pushing for tax cuts just to enrich oneself and one’s fellow clubmembers, at the cost of “others” at least makes sense from a rational-actor model. Specifically, the Romney tax plan, as described here, would shift the tax burden toward the lower incomes, to benefit most those with income in the top percentiles.

The fact that they know better is also highlighted by the following. Consider the commonplace belief in certain quarters that the ARRA (aka the stimulus package) failed to create jobs. One argument was that in order to spend, resources had to be taken away from some other activity. And yet, we now hear arguments that cuts to spending on defense goods will lead to job losses (e.g., Ryan [5]; see Bartlett’s discussion). The two arguments are logically inconsistent, but apparently this inconsistency little troubles these individuals.

The stakes are high. The impending fiscal cliff, the combination of expiration of tax cut provisions, and the implementation of the sequester provisions, constitutes a clear and present danger. The sequester was made necessary by the Republican intransigence regarding tax increases. Now the US economy faces the prospects of a renewed recession. With the eurozone in outright recession, and still skirting financial collapse, and China entering a period of uncertain but definitely slower growth prospects, it would not be exaggerating to say that political paralysis threatens to push the world economy into recession.

The impact of diving off the fiscal cliff is illustrated in Figure 1. 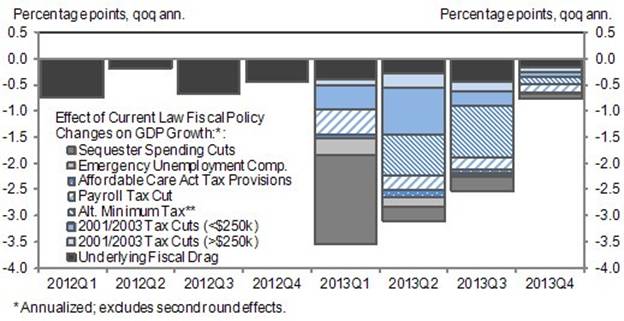 
The extent of the hit to growth would depend on the number of provisions extended. For additional discussion, Bloomberg Brief, Goldman Sachs, and Citi. The CBO analysis and baseline forecast is covered in Box 2-1 in the August Update.

Current informed commentary holds that after the election, sane minds will prevail; if something more than a temporary extension is achieved — such as a plan of medium term fiscal consolidation incorporating both tax increases and spending decreases, combined with continued short term stimulus — we then might yet see our optimism of two years ago validated:

… A skeptic might conclude that nothing can change for the better, that neither the interest groups nor the taxpayers nor the policymakers have any reason to act differently. We prefer to think that there are times when citizens, voters, interest groups, and policymakers are able to rise above their own self-interested concerns. We hope that now is one of those times, and that Americans learn from this painful episode to avoid another lost decade.

More on the Lost Decades here.