Today, we have a guest contribution from Marios Zachariadis, Associate Professor of Economics at University of Cyprus.

The Cypriot economy is being shocked via numerous channels. First, the loss of working capital by Cypriot businesses: 40%-90% of their deposits over 100,000 euro held at the two main banks. The second is a liquidity shock due to the remaining deposits in these banks being frozen for months. Overall, 90%-100% of deposits above 100,000 have either been confiscated or frozen in the two banks. The third channel relates to a significant loss of confidence in the banking system. The last two shock channels are amplified by unprecedented internal and external capital controls forced upon Cyprus. The fourth channel relates to the loss of a good part of a major sector i.e. banking, finance and related services. The fifth relates to the adverse wealth effect on a number of households and professionals who saw most of their wealth in the form of savings disappear overnight. One last adverse shock has also been in place for a while as Cyprus implemented austerity measures several months ago, much before the actual agreement for a Memorandum of Understanding (MoU) with the Troika. Moreover, the current rescue plan’s obvious non-sustainability makes it rational for households and firms to expect more austerity, which affects current consumption and investment plans.

The overall likely outcome is a double-digit dip in GDP growth for 2013 with positive growth rates out of reach for several years thereafter. This might explain why the IMF refrained from publishing forecasts for Cyprus in its most recent World Economic Outlook as these would either contradict optimistic Troika forecasts in Cyprus MoU or look bad down the road.
What can be done to remedy the situation? It goes without saying that Cyprus needs to implement measures agreed in the MoU in a timely manner, and do more to implement growth-enhancing reforms by fixing structural problems that pre-existed before the arrival of these shocks. But this will not suffice. The burden undertaken by Cypriots is unsustainable. It has become so large due to the indecisiveness of the previous government but also because of the intrinsic unfairness of the solution imposed on Cyprus. 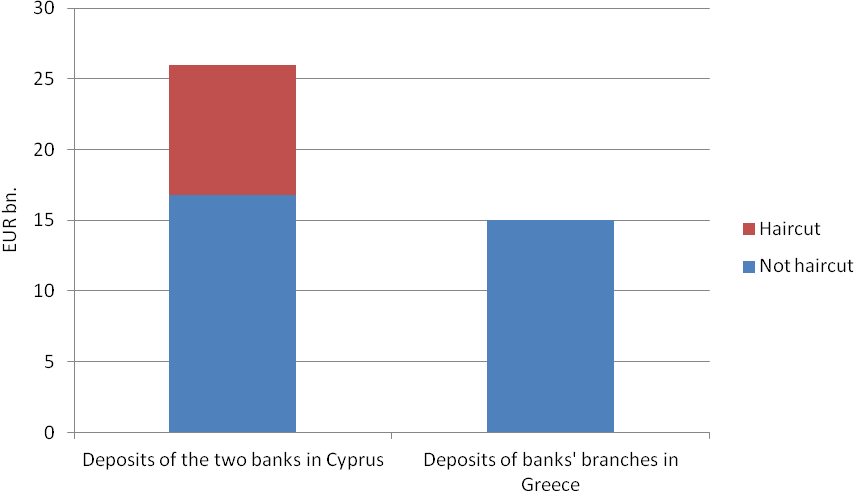 Why is the magnitude of this burden unfair and as a result unsustainable? To begin with, one simply needs to ask the question: Why were the deposits at the branches of the two Cypriot banks in Greece excluded from haircuts? These amounted to about 15 billion euro of deposits as compared to 26 billion in the same two banks in Cyprus (Dixon 2013), which suggests that about a third of the haircut, i.e. up to three billion euro, could have come from depositors of these banks in Greece. One might understand why the banking system in Greece and the Eurozone should be protected in this manner. After all, the will of the ECB and the Commission to avoid any direct contagion risk was evident in their insistence that Cyprus sold its bank branches in Greece, or the Troika would not agree to a bailout. But Cypriot depositors and taxpayers cannot afford to offer insurance that costs them a couple or more billion at such heavy discount.
One can also understand that the Central Bank of Cyprus and the Eurosystem could not go ahead and realize a loss by selling inadequate collateral of a bad Cypriot bank (LAIKI) that the ECB appears to have funded via Emergency Liquidity Assistance (ELA) for a long time after it was apparently insolvent, without impairing ECB’s ability to keep doing the same for other Eurozone banks. Xiouros (2013) argues that ELA has claims only against the collateral so what was done to avoid a loss could be illegal. On the other hand, realizing such a loss would amount to illegal monetary financing and would have exposed the ECB, undermining its ability to help troubled banks just a few months before the German elections. Thus, the need to push the envelope by adding the ELA of a bank that has been shut down (LAIKI) to the balance sheet of another private bank (BoC). The ELA that was used for liquidity of LAIKI depositors in Greece should not permanently burden another private bank. It would even be preferable to have this loss placed on the government’s shoulders.
In that case, it would become obvious that Cyprus needs debt restructuring, either Private (PSI) or Official Sector Involvement (OSI), which the European Commission is also trying to avoid for political reasons e.g. PSI for Greece supposedly a unique event (Gulati and Buchheit, 2013) and OSI a forbidden word before German elections. It should, however, become clear to Europe that if there is no PSI so as to insure the euro zone from contagion, there will have to be OSI later.
In the absence of some sort of Marshall-type plan in the form of targeted EU transfers of 2-3 billion euro and some form of retroactive application of the Banking Union or PSI/OSI for Cyprus, we are looking at a Great Depression disaster. Cyprus’ hope is that, if anything, by resolving the moral hazard issue this bail-in precedent makes Banking Union more likely. In that case, Cyprus needs and deserves some sort of retroactive implementation of the Banking Union for part of its ELA burden. These numbers should be understood in the context of a country with a GDP of less than 18 billion euro that, driven by its bankers and politicians short-sightedness, has already contributed to Greece’s rescue program a quarter of its GDP (4.5 billion) due to the European political decision for a PSI for Greece in 2011.

17 thoughts on “Guest Contribution: “Fairness and Sustainability for Cyprus””