…in the minds of the too-busy-to-consult-data, but have time to comment on blogs

Reader J.D. wrote in response to my last tabulation of shrinking government employment:

More related to the criticism is growth in government bureaucracy and the army of bureaucrats. So if you can strip out military, postal, and temp census workers (which I don’t have time to do myself at the moment), you’d get an even more accurate graph to either validate or contradict the argument.

So, here are plots of government and Federal employment (ex.-temporary Census workers), and Federal and ex-postal, respectively, so we can assess the view that government employment is expanded relative to 2009M01 (J.D.’s baseline) (Note: since the BLS series is civilian payroll employment, I didn’t need to strip out military). 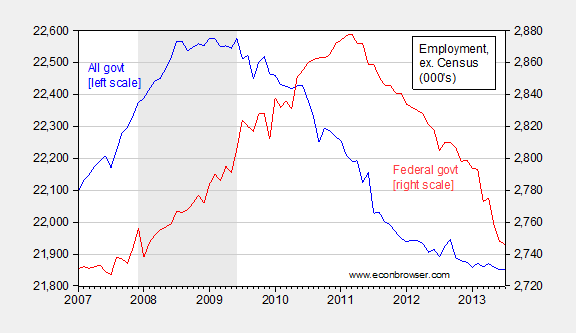 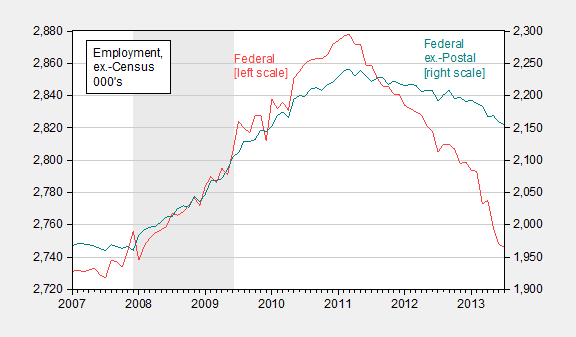 July statistics indicate Federal employment workers is 38,000 lower than when President Obama took office; excluding Postal Service, it is 107,300 higher (although it is unclear to me why one would exclude Postal Service; Heritage Foundation provides their rational here). Over this same period, the labor force is 1.6 million higher. The decline in Federal employment has averaged 9.7 thousand per month over the last three months (and excluding Postal Service workers, 4 thousand per month).

Of course, these figures are tabulations of employment, rather than hours worked. As highlighted in this article, hours worked have probably declined even faster. 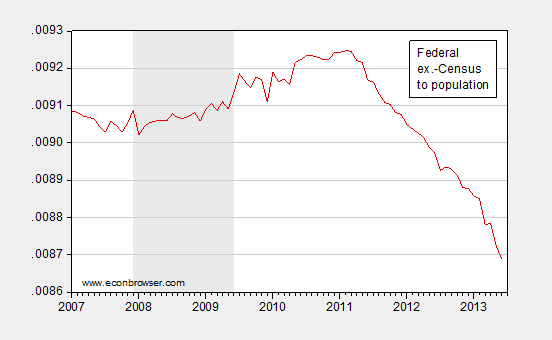 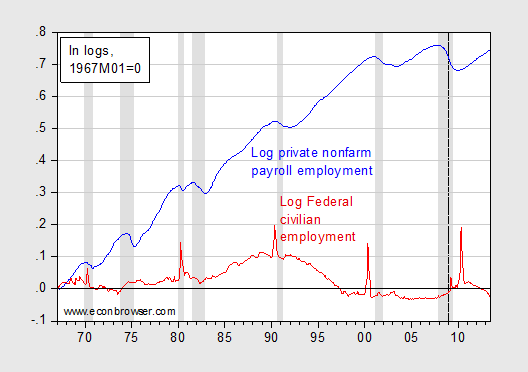 Update, 8/16, 3:20PM Pacific: Rick Stryker has provided data to validate his assertion that Federal employment excluding employment not based on appropriations is still higher than when President Obama took office. Figure 1 illustrates the data he has graciously provided me. 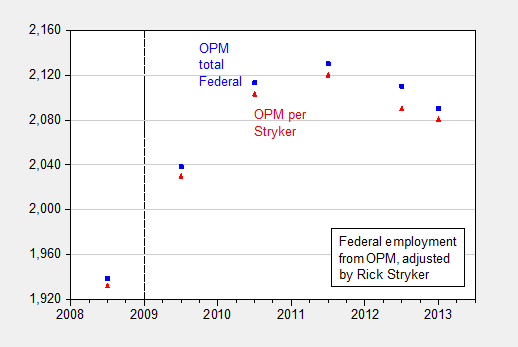 Figure 5: Employment according to Office of Personnel Management (blue square), and adjusted to remove agencies not dependent on appropriations (red triangles). Dashed line at 2009Q1. Source: OPM, and personal communication from Rick Stryker.

These figures are lower than, but follow the same pattern as, BLS measured Federal government employment ex.-USPS ex.-temporary Census workers. 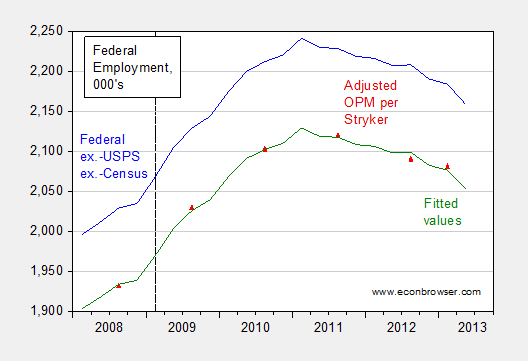 Figure 6 also shows the fitted values from regressing Rick Stryker’s preferred series on the BLS adjusted series (in logs, slope coefficient 0.97, adjusted-R2 = 0.99). Note that employment declines quickly in the quarters after March, when the sequester started being implemented. (OPM figures for June will be available in late September).

It is important to note the per capita trend; if 2013Q3 is like predicted 2013Q2, even using Rick Stryker’s preferred series, Federal employment per capita will be below levels recorded at 2009Q1. 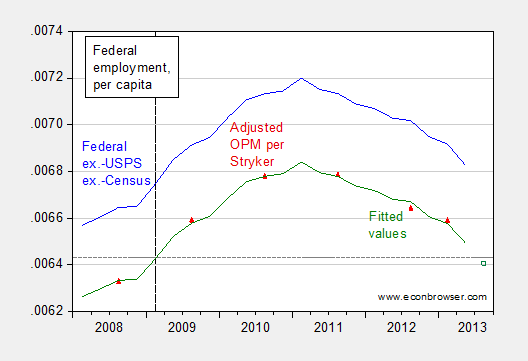 For those who believe that, for macroeconomic analyses, particularly with respect to impact on GDP via multiplier effects, overall government employment is relevant, then Figure 3 is relevant.

64 thoughts on “Ever Expanding Government Employment”