Governor Walker’s administration has in the past criticized the BLS series for state nonfarm employment, and has relied upon the Quarterly Census of Employment and Wages (QCEW) series (which lags in reporting by several months). The QCEW is more accurate, as it’s a census (rather than a survey-based estimate in the NFP series). In the past, benchmark revisions of the BLS series have pushed up the BLS series. [0] Today, Governor Walker again touted the QCEW numbers. [1] However, it appears that there will be only a small revision to the BLS series once they are benchmarked to the QCEW. 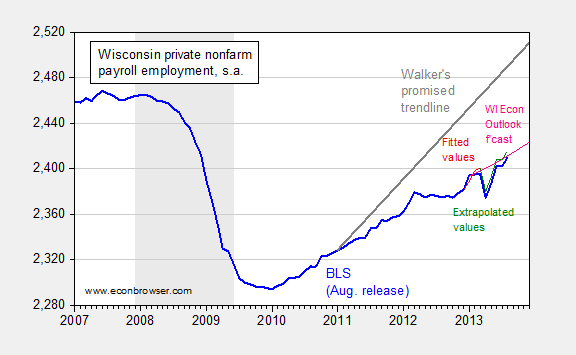 Technical Notes: I downloaded the QCEW private employment series, logged it, and seasonally adjusted using ARIMA X-12 (arithmetic), over the available sample (2001M01-2013M03). I regressed the log private WI nonfarm payroll employment series on this seasonally adjusted QCEW series to obtain the 2013M01-M03 fitted values. I then took the anti-log of the predicted series to obtain the estimates in levels. For the extrapolated values, I added the actual log changes in the BLS series and added to the fitted value for 2013M03 (in levels).

In sum: Wisconsin private employment growth continues to lag the Nation’s, as well as Minnesota’s, since 2011M01, despite any revisions likely to come from the newly release QCEW. [2]