That’s the title of CEA Chair Jason Furman’s presentation at the University of Wisconsin at Madison on Monday. Introduced by UW Chancellor Becky Blank, his discussion covered a wide range of issues. From WisBusiness:

One point highlighted by Dr. Furman was the fact that there has been substantial reduction in the budget deficit, and a remarkably large reduction in the deficit, expressed in percentage points of GDP, in just the last year. I’ve pulled a graph from the CBO to highlight this observation. 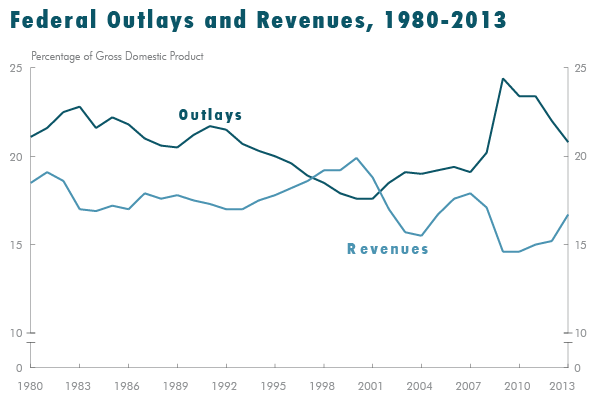 However, the objective, if I paraphrase correctly, is not to cut spending indiscriminately, but in a manner that is both smart and effective. The sequester does not satisfy either of those criteria.

He also stressed the related point, made elsewhere, that the fiscal gap has shrunk considerably. So that I get the convey the point correctly, I’ll quote from the interview:

The second point, which I think is less widely appreciated, is it’s not just that the near term deficits has come down, the long run deficit outlook is also considerably better than it used to be. So you look at the Congressional Budget Office’s 75-year outlook and what most economists would look at for the measure of the deficit – “the fiscal gap” or how much you would need to raise taxes or cut spending today to stabilize the debt over a 75-year window — and their fiscal gap over 75 years is a little bit less than 2 percent of GDP. Now, if you look at the debt 75 years from now it spirals and goes really high but every time you have a small wedge things get very large. In contrast, I used to write things before CBO was doing the estimate with Alan Auerbach and Bill Gale and we generally had numbers that were nearly 10 percent of GDP. So the 75-year outlook is considerably better and that’s because of projections around health and some of the changes we’ve made in terms of revenue and things like the Affordable Care Act that has significant long-run deficit reductions.

Other coverage, here and here.