From Goldman Sachs, “Is the Economy Gaining “Fracktion?”” (not online):

There is little evidence of significant “induced” employment growth in downstream manufacturing industries. Similarly, cap-ex in energy intensive sectors that might be expected to benefit most from the shale boom has not outperformed cap-ex in other sectors during the recovery, although it did decline by less during the recession.

On top of fears that the surge in unconventional oil and natural gas will not be enduring [1] [2] [3], there remains some doubt that the development of fracking will be the game-changer that many have claimed – at least with respect to macroeconomics. (Prominent studies include IHS (2012), McKinsey (2013).)

Below I turn first to a discussion of employment growth in core oil and gas extraction. Then I discuss the extent (or non-extent) of spillover effects to the rest of the economy.

The impact on Oil and Gas Sector Employment

It’s clear that employment has increased dramatically in recent years. 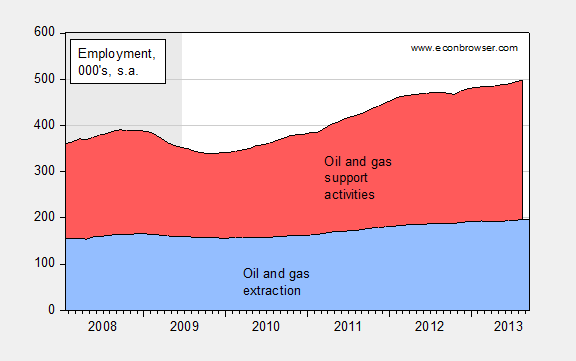 It’s important, however, to recall the context. This sector accounts for a very small portion of total nonfarm payroll employment. This point is highlighted in Figure 2. 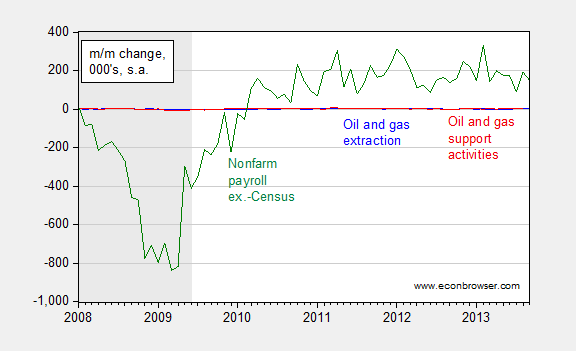 It might be expected that the resulting decrease in natural gas prices will result in lower production prices, either through lower energy prices (GS sees little impact thus far) or lower feedstock prices. Certainly gas costs in the US are lower than overseas (oil prices will remain tied to overseas, see here). 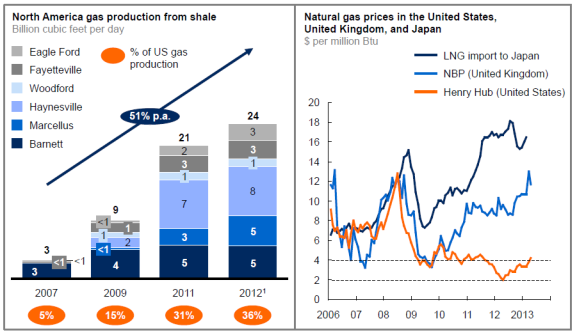 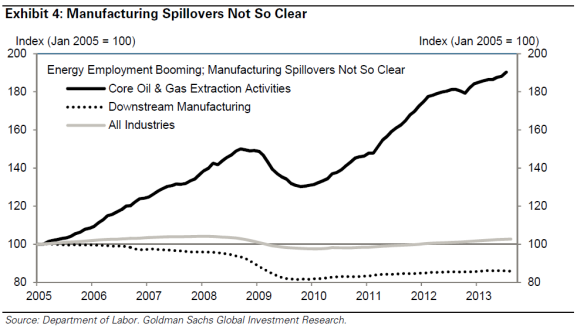 
What about stories of “re-shoring”, that is the return of manufacturing production to the US, as recounted in The Economist? Employment is indeed increasing in manufacturing, as is total output. 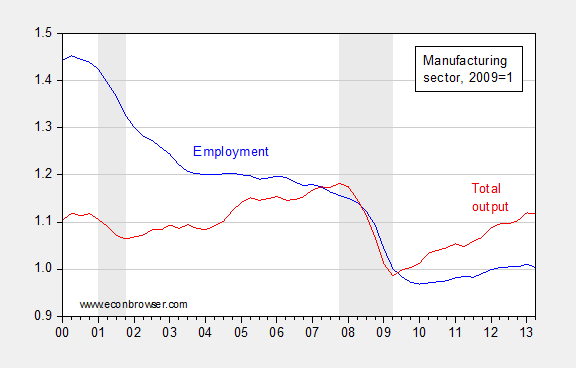 Still, energy prices are only one factor in the calculations firms make. Rising labor costs overseas (particularly China), exchange rate changes, and — perhaps most importantly — the supply chain disruptions associated with the 2011 earthquake and tsunami might loom even larger than the differential in energy prices. Hence, the case for very large employment and output effects from the “shale revolution” remains to be made.

Perhaps the most nuanced assessment of what magnitudes of effects to expect comes from the IMF’s Article IV review of the US economy (Special Topics), pp. 27-28:

The [IMF Global Economic Model] simulation results suggest that the macroeconomic benefits for the United States
are positive, but may be modest. In a scenario with only production gains (and no efficiency improvements), the U.S. real GDP level gradually increases by about 0.3 percent over the next 10
years. In a scenario with both production increases and efficiency gains, the GDP level increases by 0.5–1 percent during the next decade. In the short run, the impact on GDP is largest when the boom
in energy production and efficiency are fully anticipated and the economy exhibits economic slack (and thus monetary policy does not need to lean against the resulting increase in aggregate
demand). The real exchange rate tends to appreciate and energy prices fall in all scenarios, helping to boost private consumption and investment. In the medium run, the U.S. current account balance
as a share of GDP deteriorates slightly, but the adjustment path is highly sensitive to assumptions about expectations and private saving behavior—the current account can either improve or
deteriorate.

Update, 11/6 10AM Pacific: Prakash Loungani has more thoughts on the matter here.