First, here is the entire sample of advanced countries (as defined in the IMF’s World Economic Outlook), for cumulative growth rates 2009-13 plotted against cumulative change in the cyclically adjusted budget balances. Note the statistically significant negative relationship, indicating that the more contractionary the policy stance, the slower the growth. 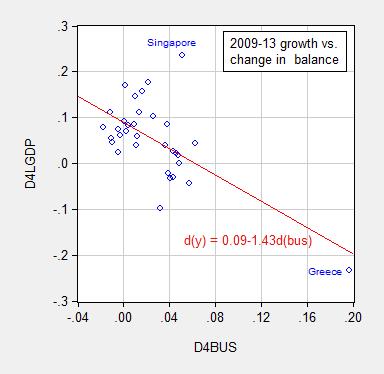 The slope coefficient is negative, and highly significant, with the adj-R2=0.39.

Second, it’s clear that eurozone countries are a special case, where monetary policy is out of the control of the individual countries; a question is whether countries with their own monetary policy could actually experience an expansionary fiscal contraction. Figure 2 illustrates the same relationship, excluding euro area countries (and Singapore, which is an outlier, even in the full sample). 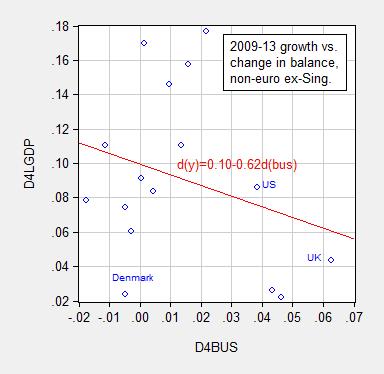 I have also run the regression using primary structural budget balances to GDP (not potential GDP) for the available countries (including Denmark) from the IMF’s Fiscal Monitor Appendix Table 1; I obtain a slope coefficient of -0.86, significant at the 8% msl. I discount these regressions somewhat because GDP (the denominator in the budget-to-GDP variable) is highly endogenous to the change in the numerator.

Clearly, other factors besides fiscal policy can affect output — monetary policy, supply shocks, financial policies, exogenous export demand shocks, such as ones that hit Singapore. But interestingly, the negative relationship still shows up in these bivariate regressions.

However, other studies have controlled in a more sophisticated manner for exchange rate regimes, openness, debt levels, and also come to the conclusion that contractionary fiscal policy is … contractionary. I’ve reviewed some salient papers in this post. Yet more discussion of some of the additional nuances can be found in the posts under the multiplier category. See this New Palgrave Encyclopedia of Economics chapter for an examination of why one would expect to see relatively large multipliers in the current economic conditions of ZLB and excess capacity.

25 thoughts on “Euro and Non-Euro Countries and Fiscal Policy”