…In the immediate aftermath of the crisis, countries that depleted foreign reserves during the crisis quickly rebuilt their stocks. This rapid rebuilding has, however, been followed by a deceleration in the pace of accumulation. The timing of this deceleration roughly coincides with the point when reserves reached their pre-crisis level and may be related to the fact that short-term debt accumulation has also decelerated in most countries over this period.

Note that the characterization applies to a ratio — specifically the log ratio of reserves to short-term debt, rather than reserves specifically.

First consider the evolution of the level of reserves, for non-advanced economies as categorized by the IMF, and China: 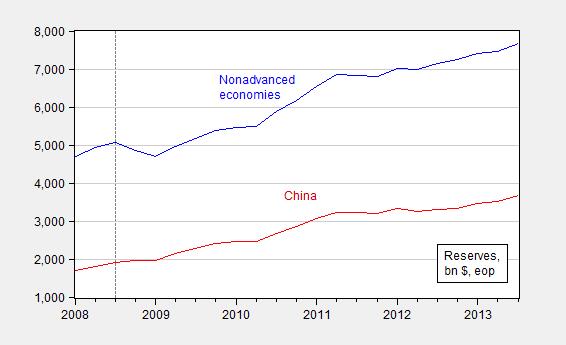 
Second, as we argue in the paper, the (log) ratio of reserves-to-short term debt seems to be a key explanatory variable for growth during crisis the stabilization in terms of the log-ratio is even more pronounced.

Figure 8 from the paper highlights the general pattern for the BRICs plus, at least in the sample examined (the sample ends earlier in the paper, matching the availability at time of writing of short term debt used to construct the ratio). 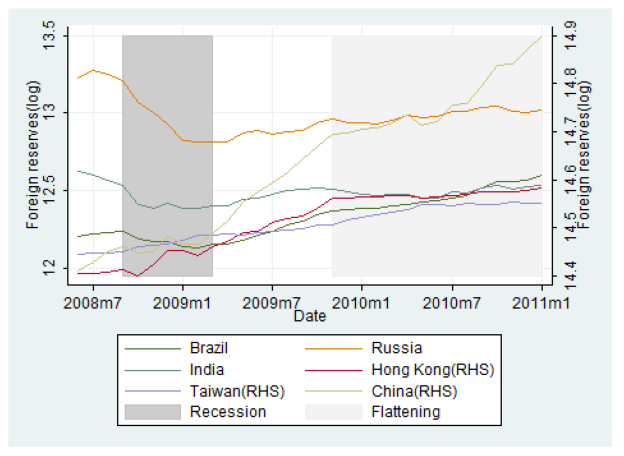 
For these countries, the ratio has plateaued. China is one notable exception. (However, since the end of the graph’s sample, Chinese reserves level did stabilize, with a resumption of slower growth in 2013.)