The Bureau of Economic Analysis announced today that U.S. real GDP grew at a 3.2% annual rate in the fourh quarter. That’s two quarters in a row now of above average growth. Given recent experience, that sounds pretty good.

The brightest star was U.S. exports of goods and services, which contributed 1.5 percentage points to the 3.2% total. Nearly half of the export gains came from the foods, feeds, and beverages category, in which agricultural goods shipped to China figured prominently. Another important contribution came from exports of nondurable industrial materials. This includes exports of refined petroleum products, which are one byproduct of growing domestic production of crude oil. 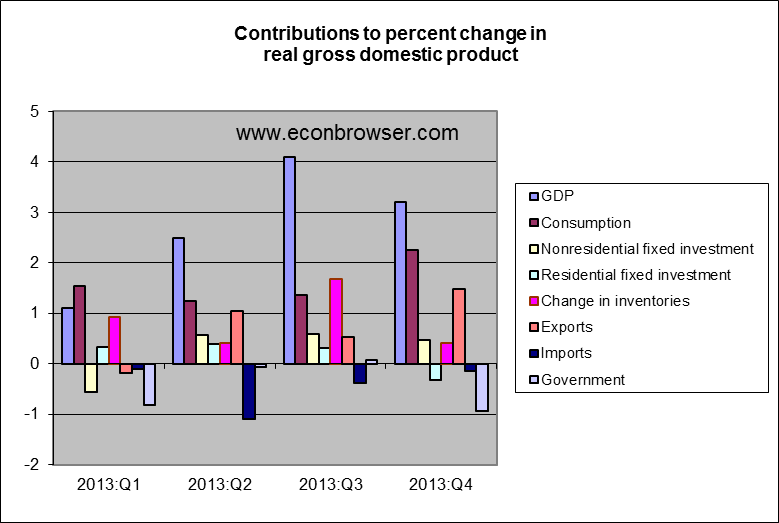 The biggest drag came from the public sector, resulting in part from the federal shutdown in October. Lower government purchases of goods and services subtracted 0.9 percentage points from the fourth-quarter GDP growth rate. Bill McBride believes that public spending and private investment should make positive contributions in the current year:

Two quarters of above-average GDP growth have brought our Econbrowser Recession Indicator Index down to 3.3%, which is a very favorable reading. Note that in calculating this index we allow one quarter for data revision and trend recognition. Thus the latest value, although it uses the GDP numbers released today, is actually an assessment of the state of the economy as of the end of 2013:Q3. However, our index is never revised, so that the numbers plotted in the graph below since 2005 are exactly the values as they were reported one quarter after each indicated historical date on Econbrowser.

To sum up: things are looking good, and are likely to get even better.