The U.S. federal deficit fell from around $1.1 trillion for fiscal year 2012 to under $700 billion for 2013, and is projected by the Congressional Budget Office to be below $500 B by 2015. Although it sounds like continuing improvement, the CBO’s projected path is actually unsustainable. Here’s why.

The first thing to understand is the difference between the federal deficit and the federal debt. The deficit is a flow variable, measured in dollars per year. Specifically, the deficit is the difference between the government’s spending on goods, services, transfers and interest payments over the course of an entire year and the revenues that the government takes in during that year. The $680 B/year U.S. deficit was half as big in 2013 as it had been in 2009. By 2015 the CBO is projecting that the annual deficit will be down to only a third of its 2009 value.

By contrast, debt is a stock variable that measures how much money the government owes at a particular point in time. If the deficit is positive, it means that the government spends more over the year than it takes in as revenue. In that case, the government wouldn’t pay back any of the debt it owed at the start of the year, so it would have to roll over that debt and still owe that sum at the end of the year, and in addition would need to issue new debt to cover the deficit during the course of the year. Thus whenever the government is running a deficit (regardless of whether it is a smaller deficit than the year before) the total level of debt is going to be higher at the end of the year than it was at the beginning. At the start of fiscal year 2012, the government owed $10,128 B. During that year, it spent $1,087 B more than it took in as taxes, and it ended the year owing $11,281 B, an increase in the debt of about 1.1 trillion dollars. During FY 2013, the deficit was $680 B, and we ended the year with a debt of $11,982, about 700 billion more than we started. The deficit is projected to continue to decrease further in 2014 and 2015, but the debt nonetheless will continue to climb.

A growing debt load can be offset by the fact that the U.S. economy should be bigger in 2015 than it is today. The CBO projections released last week expect U.S. real GDP to rise by over 3% a year for each of the next three years. As summarized by the table below, the CBO is a little more optimistic than some other forecasters, but their growth forecasts strike me as quite reasonable.

Given this anticipated growth in GDP, even though the debt is expected to increase every year, the economy is projected to grow even faster, so that the CBO anticipates that U.S. federal debt held by the public will decline modestly over the next several years when measured as a percent of GDP.

Interest expense is another variable to factor in. The U.S. Treasury’s net interest expense for FY 2013 was $221 B, or about 1.8% of the ending net debt level of $11,982 B. That low interest cost, despite the large debt load, is reflective of the fact that the interest rates at which the Treasury is currently borrowing are extremely low. The imputed average interest rate, 1.8%, is close to the 2.2% average yield on newly issued 10-year Treasury securities during FY 2013. Historically, you can get a good estimate of the number of dollars that the Treasury will spend in order to make its interest payments by multiplying the level of outstanding debt by the average 10-year interest rate over the year.

Low interest rates are the main reason that the net interest expense ($221 B) was so low in 2013 despite the high level of debt. If interest rates were to return to the average level of 4.5% that we saw over the last decade, it would mean that the Treasury’s net interest expense would grow to 2-1/2 times its level last year, even if we were to get the deficit all the way down to zero beginning in FY 2014 so that the level of debt never grew above where it was at the end of FY 2013.

The CBO, like most other forecasters, is anticipating that interest rates will rise gradually over the next several years. In addition, rising medical costs and an aging population are expected to bring the primary deficit back up in the near future. When the CBO put all these different factors together, their conclusion was that, despite the fact that the deficit is projected to shrink over the next two years, and despite the fact that the economy is assumed to experience above-average growth over the next several years, U.S. debt will resuming rising relative to GDP after 2017.

In the CBO’s forecast, the sum that the U.S. Treasury will be paying each year just to make the interest payments on the debt it’s already accumulated is projected to exceed the entire defense budget or the total of nondefense discretionary spending by 2021. 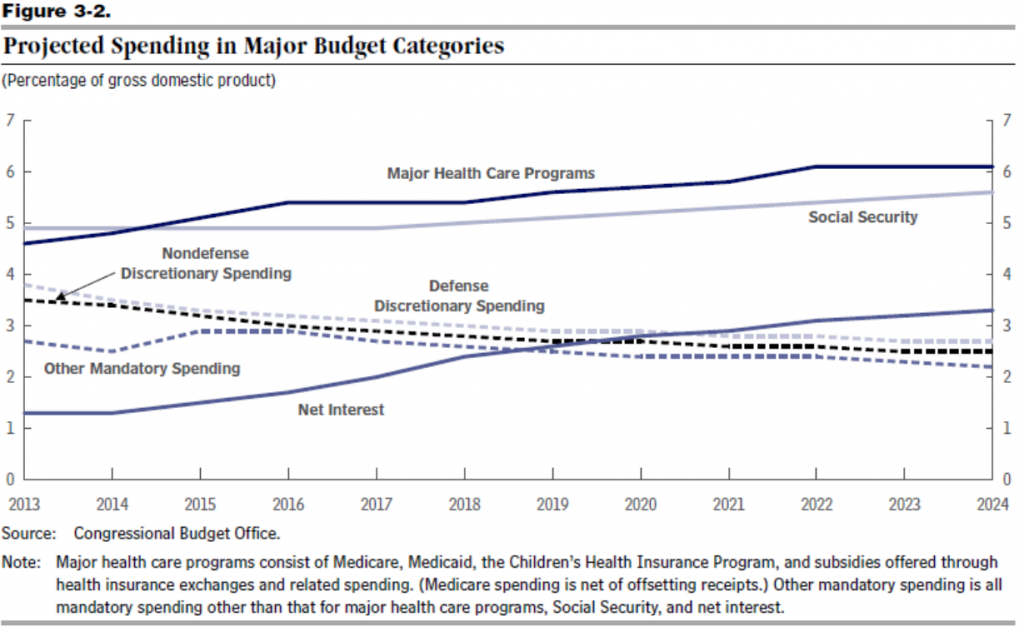 There’s no reason to think that the number of dollars investors around the world are willing to lend to the U.S. government would continue to grow at a faster rate than the economy itself. Something more has to give as you project this scenario forward.