If a collapse in aggregate demand is not at fault, then was an aggregate supply shift? A quick-and-dirty evaluation using some back-of-the-envelope calculations

In 2008Q4, GDP fell at an annualized rate of 8.9%; it fell another 5.6% going into 2009Q1. One interpretation is that aggregate demand collapsed. An alternative interpretation is that supply fell; in this view, aggregate demand management policies would have no effect, or even be counterproductive. In this light, I thought it of interest to consider what must be true in order for the supply side view to be correct. 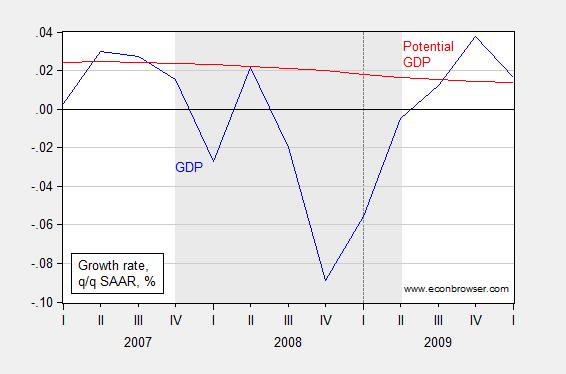 Now let’s consider two alternative views of the world. The first is the conventional aggregate demand framework (I take this from Blanchard and Johnston): 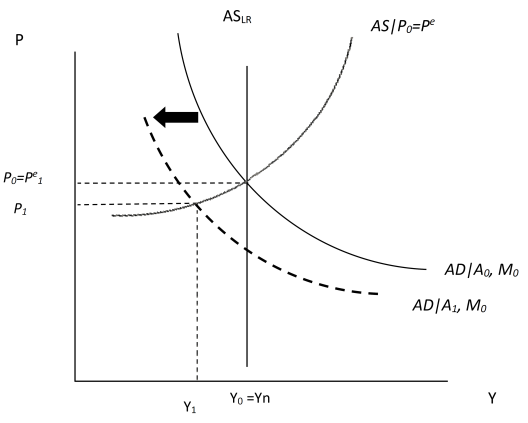 
The aggregate demand curve is downward sloping because a higher price level, holding constant the money supply, leads to a higher interest rate and hence lower investment (or consumption; or a stronger dollar). The downward sloping AD curve can also be rationalized within a CC-LM model, as well as a model with collateral constraints.

A decrease in the AD curve could arise from a reduction in consumption, say due to a decline in perceived net worth, or a tightening of credit constraints that leads to more liquidity constrained households.

Alternatively, one could consider an inward shift of the Classical aggregate supply curve (which is vertical because prices are perfectly flexible). 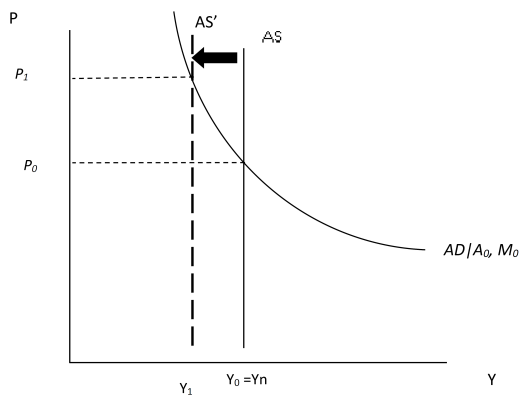 
I’ve drawn the figures such that in both cases, output falls the same amount. One interesting difference is that in the case of a demand shock, price level falls (or when there is expected inflation, inflation falls), while in the case of a supply shock, the price level rises. What does the data indicate? 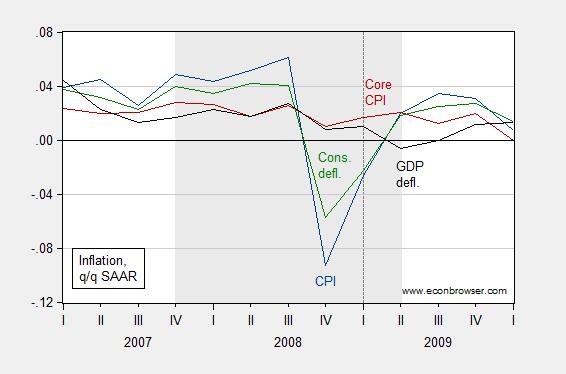 Another way of thinking about the plausibility of the Classical interpretation is to recall:

If output is completely supply determined, then one has to think about the fact that the change in output must be attributable to either the change in total factor productivity, TFP (Φ), the capital stock (K), or the labor stock (N). That is (after taking logs, and assuming a Cobb-Douglas production function): 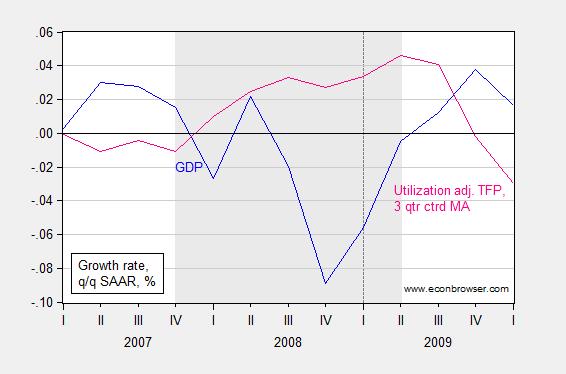 A big decline in TFP growth does not seem apparent to me.

Finally, what about the labor stock – could it be that the jobs-skills mismatch rose so much that it accounted for a 6.2% reduction in the effective labor stock? Perhaps, but Ed Lazear and James Spletzer (2012) argues that most of the unemployment is not due to this factor.

None of the foregoing should be construed to mean that the decline in output in 2008-09 is due entirely to the decline in demand. I believe some of it can be ascribed to supply shocks, e.g., Hamilton (1988). However, it seems difficult to argue that it is almost entirely a supply shock in the Classical sense. And if one is skeptical that it was almost entirely due to a Classical supply shift, one should also be skeptical too of a real business cycle approach, which is a stochastic re-interpretation of the Classical model. (Rousing defense of the RBC interpretation from McGrattan and Prescott (2014).) By the way, I’m happy to entertain an upward shift of the short run aggregate supply curve in the AD-AS framework, wherein oil prices feed into the price level, in an economy with monopolistically competitive firms that markup-price. But that textbook, and is an economy where countercyclical fiscal policy works in the conventional manner.

By the way, there is at least one person who is beating the drum for a completely supply determined interpretation of the Great Recession. That person is Casey Mulligan (interpretation here, 2008 forecast here, includes the prediction that in the absence of nuclear war, nonfarm payroll employment would not fall below 134 million [1]).

20 thoughts on “Interpreting the Great Recession in a Classical Framework”