Recent indications are that, in the face of declining inflation, ECB President Draghi is considering embarking upon quantitative easing. Despite the technical difficulties accompanying such a measure [0] [1] I believe additional stimulative measures are nonetheless called for.

This figure from the recently released World Economic Outlook (p.55) demonstrates that while the overall euro area inflation rate is still (barely) positive, the minimum inflation has clearly dipped into the negative region. 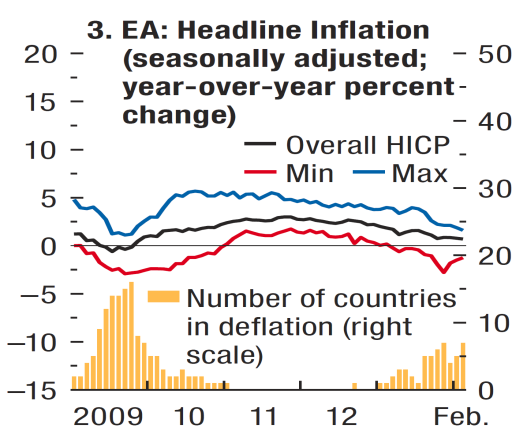 Not only is deflation occurring in the periphery countries, from one perspective, the need for higher short term inflation extends even to countries not experiencing deflation. Figure 1 depicts the euro area price level, as measured by the Harmonized Index of Consumer Prices (HICP), as well as the levels for several individual countries within the euro area, all normalized to 1999M01=0. 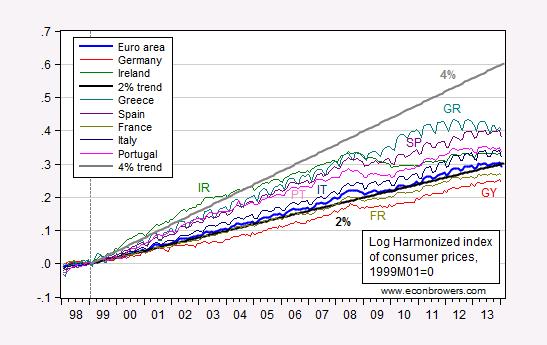 Giannoni and Harmen argue that in the case of the United States, the Fed, by virtue of a long term 2% inflation target, has effectively implemented a two percent price level target. In some sense, the same appears true for the ECB and the euro area. Figure 1 indicates that the euro area wide HICP has followed the 2% price line (disturbingly, the overall HICP has dipped below the 2% line).

At this juncture, the distinction between the US as a monetary and fiscal union with high interstate factor mobility, the euro area as a monetary union with relatively low inter-country factor mobility, becomes important. While inflation is negative in the periphery countries, the deviation from the trend line is negative for the core (and large) euro area countries of Germany and France. The German deviation is about 5% in log terms. While the French deviation is smaller in absolute value, it contrasts with the pre-crisis value of essentially nil. If nominal debt had been accumulated with the expectation of the two percent trend in the price level, the very fact that the price level is lagging implies higher than expected debt burdens and hence more binding collateral constraints.

Macroeconomic policies should stay accommodative. In the euro area, additional demand support is necessary. More monetary easing is needed both to increase the prospects that the ECB’s price stability objective of keeping inflation below, but close to, 2 percent will be achieved and to support demand. These measures could include further rate cuts and longer-term targeted bank funding (possibly to small and medium-sized enterprises). …

In addition to reducing the likelihood of encountering the liquidity trap [3], and heightening the credibility of future inflation during periods of deflation [3], a steeper price level target allows for better relative price adjustment. This last point is critical given the conditions of the euro area, which include downward price rigidities (specifically, it is easier to have prices in country A rise by 5% and those in country B stay constant, than a 3% rise and 2% decline, respectively).

In other words, we need higher inflation now!

9 thoughts on “Dispersion in Price Trends in the Euro Area”