Today we are fortunate to have a guest contribution by Ron Alquist, Policy Adviser at the Bank of Canada, and Olivier Coibion, Assistant Professor at the University of Texas, Austin. The views expressed here are those of the authors and should not be interpreted as representing the views of the Bank of Canada or any other institution with which the authors are affiliated. 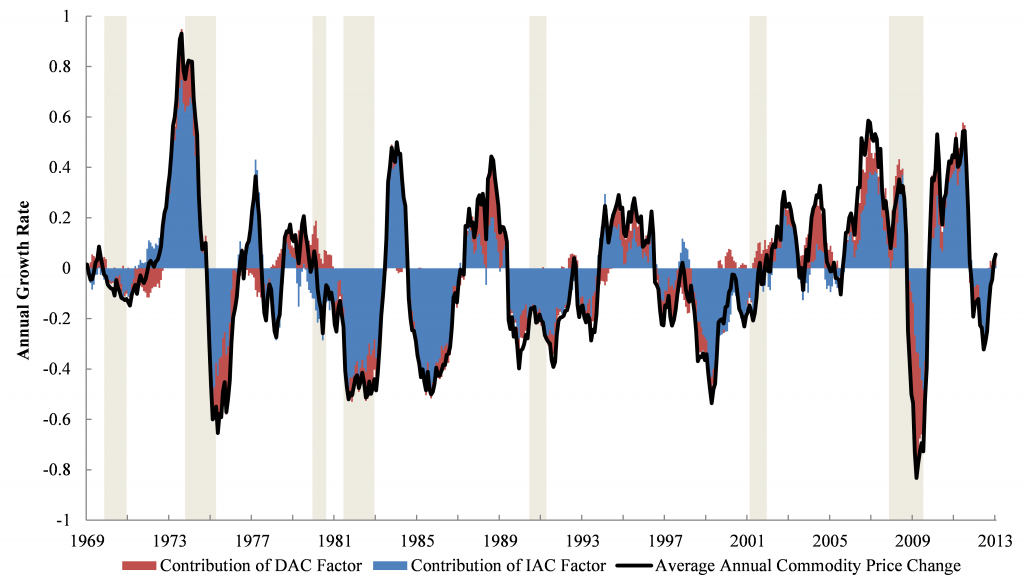 Our approach also has a more practical application: forecasting. Because we rely only on commodity prices traded on global markets, our decomposition can be applied in real-time to forecast a wide range of commodity prices within a common framework. We show that a simple model that includes the indirect factor and the price of an individual commodity generates out-of-sample improvements in forecast accuracy relative to the no-change forecast — that is, the forecast that assumes the price of the commodity does not change. The improvements in forecast accuracy are the largest at the 1- to 6-month horizons. What is more, the model helps to forecast the behavior of broader commodity-price indices, such as those produced by the IMF and the World Bank. The model also works well at forecasting the price of oil at short horizons. The improvements in oil forecasting accuracy are similar in size to those based on models of the global oil market (see, e.g., Baumeister and Kilian 2012; and Alquist et al. 2013), but our model does not require data on quantities produced, which are often available only with a delay. Our approach thus provides a coherent and tractable framework for forecasting commodity prices while also providing an economic interpretation for the forecasts.
In sum, our paper offers a new framework for identifying the sources and implications of commodity-price comovement and its relationship to global macroeconomic conditions. The framework provides an economic interpretation of the common factors driving commodity prices and offers a new perspective on the historical behavior of a broad cross-section of internationally traded commodities since the early 1970s. It can also be used to generate more accurate real-time forecasts for a wide range of commodity prices and commodity-price indices.

This post written by Ron Alquist and Olivier Coibion.