Last week ECB President Mario Draghi revealed that the European Central Bank has been considering large-scale asset purchases as a tool to prevent European inflation from falling too far below the ECB’s target rate of 2%. What is the evidence for the effectiveness of these policies, and are there any risks?

Historically, when the U.S. economy went into recession, the Federal Reserve would lower interest rates through its control of the fed funds rate, an interest rate on overnight loans between banks. Lower interest rates helped stimulate demand for items such as housing and autos and raise asset prices more generally, all of which would help spur economic recovery. But that tool is not available to the Fed in today’s environment in which the fed funds rate is essentially already zero. 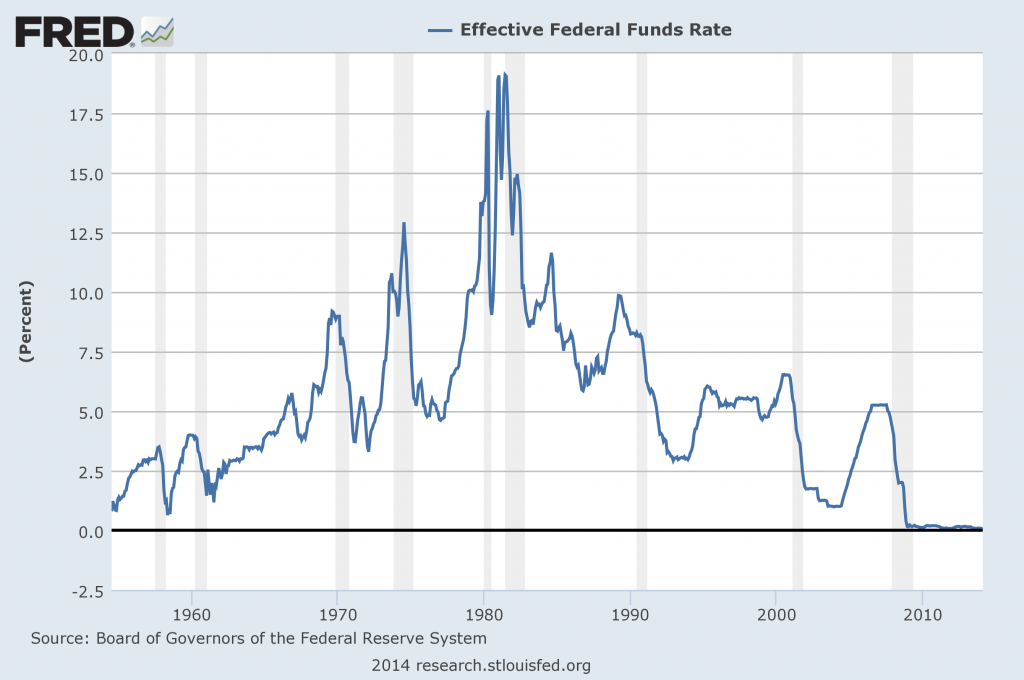 The Fed has adopted less conventional policies in the current environment by buying assets in huge volumes (large-scale asset purchases) and by indicating its intention to keep the fed funds rate low even after the economy was well into recovery (forward guidance). Although the trillions of dollars involved in LSAP may seem dramatic, the reserves that the Fed created to pay for these operations are for the most part still just sitting idle on banks’ balance sheets at the end of each day. Since those reserves earn interest when left with the Fed overnight, I think the best way to think of them is as overnight loans from banks to the Fed. If all the Fed did with these operations was buy short-term Treasury bills, essentially LSAP would just swap one short-term liability of the U.S. government (Treasury bills) for another very similar short-term liability of the U.S. government (reserves held in accounts with the Fed). Such a swap would be unlikely to change anything that matters regardless of how many trillions of dollars were involved.

For this reason, the Fed has been buying not Treasury bills but instead longer-maturity Treasury bonds and mortgage-backed securities. Taking a huge volume of these assets out of private hands and replacing them with overnight government liabilities could perhaps affect the yields on long-term Treasuries and MBS. An early analysis by Modigliani and Sutch (1966) found little evidence of an effect on interest rates of “Operation Twist” in 1961 when the Treasury tried to issue more short-term and fewer long-term securities, though a more detailed analysis of that episode by Swanson (2011) concluded that Operation Twist did have a measurable effect on yields. A number of other studies have looked at the variation over time in the maturity structure of U.S. Treasury debt and have found statistically significant correlations between the maturity structure and relative yields; see for example Kuttner (2006), Gagnon, et. al. (2011), Greenwood and Vayanos (2013), Doh (2010), and Hamilton and Wu (2012) (ungated version here).

Another approach is to look at what happened to yields on days when the Fed announced changes in LSAP that caught the markets by surprise. For example, when the Fed first announced the scope of its intended large-scale asset purchases on March 18, 2009, the yield on 10-year Treasuries fell 51 basis points. Last May, when the Fed indicated it was considering slowing the pace of asset purchases, yields went back up. Analyses of events like these provide fairly convincing evidence that market yields react to Fed announcements of changes in its LSAP or forward guidance. 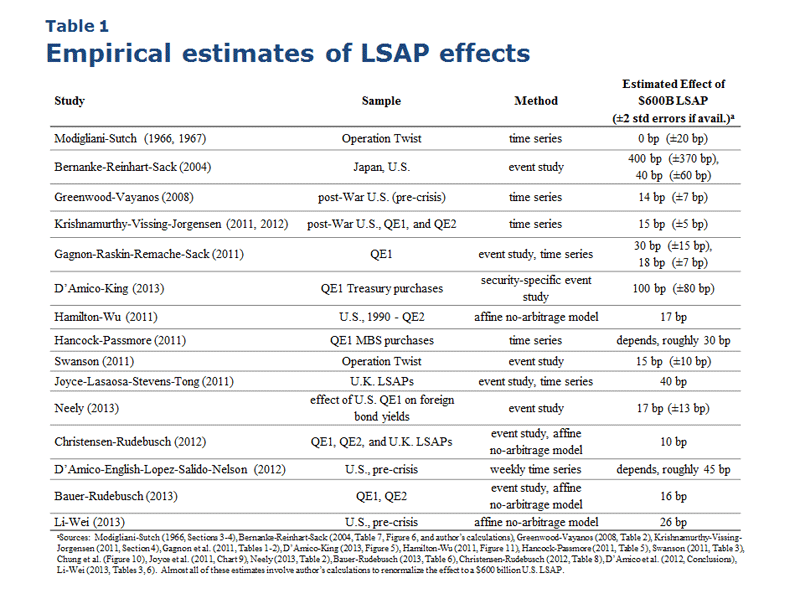 A new paper by Rogers, Scotti and Wright (2014) reviews and updates evidence from the experience of the U.S., U.K., Europe, and Japan, and concludes, like most of the studies summarized in the table above, that LSAP and forward guidance are potentially effective policies for easing financial conditions when the short-term interest rate is already near zero.

Another new study by Hayashi and Koeda provides further evidence looking at the data in a completely different way. They note that during episodes in which Japan’s short rate was near zero, an increase in the level of excess reserves in month t tended to be followed by a higher level of output in month t+1.

There is thus considerable evidence that these unconventional monetary policy measures have some modest potential to help stimulate a struggling economy. Less clear is what risks may be associated with unconventional monetary policy. If we think of LSAP as primarily a shortening of the maturity structure of outstanding government debt, replacing long-term Treasury bonds with overnight liabilities of the central bank, it’s clear that one would not want to expect too much from such measures. Assuming though there are some benefits for a struggling economy of converting government debt to shorter-term liabilities, why might the Treasury be reluctant to shorten its maturity structure? The answer is fairly obvious. Although there might be plenty of demand for short-term obligations of the U.S. government right now, will that still be the case one or two years down the road? If the Treasury was forced into a situation of borrowing in a future setting in which the huge daily auction of Treasuries turned out to be undersubscribed, the result could be a sharp spike in interest rates and substantial financial instability.

How are things different when the government’s short-term liabilities are in the form of overnight deposits with the Federal Reserve? One important point to note is that although an individual bank can always get rid of reserves it doesn’t want by buying some alternative asset, in doing so those reserves don’t disappear from the system, but are instead simply passed on to another bank from whose customer the first bank purchased the asset. Some bank will end up holding the reserves whether or not anybody actually wants them. In this sense, the Fed can always be sure that someone will lend to them overnight, whereas the Treasury cannot.

If demand for reserves is less than the supply, it’s not the supply of reserves that has to change, but instead the change has to come in terms of the price on alternative assets. For example, if assets denominated in foreign currency look more attractive than low-yielding deposits with the Fed, the dollar would have to decline sufficiently until one dollar would buy so little in the way of foreign assets that it no longer is attractive to try to do so. How far would that be? To adapt President Draghi’s famous phrase, “whatever it takes.” If banks are holding trillions more in reserves than they want, I could imagine this adjustment in items such as the exchange rate and commodity prices being rapid and chaotic.

Although the mechanics of a flight from unwanted reserves would work differently from those for an undersubscribed Treasury option, it seems to me that the economic fundamentals are the same. When faced with such a situation, there would be nothing the Treasury or the Fed could do to avoid a spike in interest rates and a potentially very disruptive financial situation if lenders are no longer willing to continue to roll over what has effectively become a huge volume of overnight government debt.

It is of course inappropriate to be paralyzed by fear of such a scenario at the present moment, when interest rates and inflation are so low; any such problems will not arise until well into the future. But I also do not think it is inappropriate to dismiss these considerations entirely, particularly if we take the view (as I do) that the benefits of additional LSAP are also likely to be fairly modest. In the case of Europe, the ECB is missing its inflation target by a sufficiently large margin that further action seems to be warranted. But in the case of the United States, I think the current course signaled by the Federal Reserve– that growth of its balance sheet will end by the end of this year– is the correct one.