There’s no denying that our bodies deteriorate as we age. But here’s one fact in which those in their golden years may take comfort. If you live long enough, your odds of developing certain cancers decline rather than increase as a function of age. 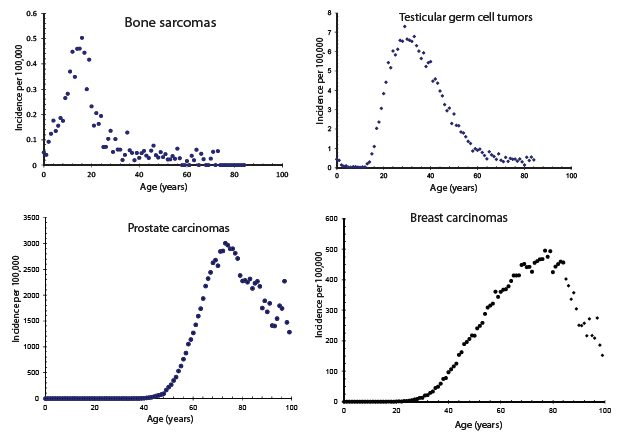 Why would that be? U.C. Irvine Biomedical Engineering Professor James Brody has an answer. The accumulation of mutations that lead to cancer takes time to develop, which is why incidence of cancer is usually observed to rise as a function of age. But people are different, and a subset of the population turns out not to be susceptible to a particular form of cancer. Some of the susceptible group first develop the disease at age 50, others not until age 70. But if you look at a group who have not shown any sign of the disease at age 80, all of the susceptible individuals who had been diagnosed by the time they were 79 are by definition not included in the group of 80-year-olds you’re looking at. As the group you’re looking at becomes older, the fraction of remaining susceptible individuals becomes lower, and the overall incidence of the cancer starts to decline as a function of age.

Brody points out that the data only make sense if people become members of one group or the other before the age of twenty. Your susceptibility to a particular form of cancer seems to be determined genetically or in development, though the particular conditions that determine this are not directly observed.

This is the same principle of dynamic sorting behind the economic research with UCSD graduate student Hie Joo Ahn that I
described last week. Just as the probability of getting cancer changes with age, we observe in data from the Bureau of Labor Statistics that the longer a person has been unemployed, the more likely it is the individual will still be unemployed next month. One explanation could be that different people start out in different circumstances, with some having a higher probability of finding jobs than others. If you look at a given group of people who have all been unemployed for n months, the higher is n the smaller the share in that group of people whose situation allows them to find jobs quickly.

This effect is driven in part by the circumstances under which the individual first became unemployed. People whose old job was permanently eliminated often face big problems finding new work, whereas those who voluntarily quit their old jobs typically find something new fairly quickly. As you look at a group of people who have been unemployed for a certain number of months n, when n is higher so is the fraction of those who suffered permanent job elimination, and the more likely it is that you’re going to observe any given individual in that group is still looking for work in month n + 1. While some factors like whether or not someone voluntarily quit their previous job are included in the BLS database, the patterns are best explained if we hypothesize that there are additional ways in which individuals differ from each other that at present we don’t observe.

Our research suggests that inflows of new people with low probabilities of getting out of unemployment make a critical contribution to typical recessions and the recent rise in long-term unemployment. Identifying the characteristics and the cause will help us to understand the slow recovery of the labor market after recessions since 1990 and find the best way to help the long-term unemployed today.

It was very interesting to see that the same idea that we were using to interpret economic data also has applications in the field of medicine.

And it’s comforting that there’s at least one good thing about growing old.

37 thoughts on “Cancer and age”