Also at the meeting of the International Association for Energy Economics last week I was honored to receive an award from the association for outstanding contributions to the profession. Here are the remarks I made at the awards banquet.

In 1980 this organization was three years old and I was in my third year in the economics Ph.D. program at Berkeley. There was a lot of interest in what was going on in energy markets at that time. The oil embargo by the Organization of Arab Petroleum Exporting Countries in 1973-74 and the Iranian revolution in 1978-79 were both associated with significant disruptions in world oil production and big spikes in energy prices. Many of us were persuaded that these events made a contribution to the two economic recessions that followed the two oil supply disruptions.

I was supposed to write a third-year empirical paper at Berkeley. As I was looking into these events I was surprised to find that this wasn’t the first time something like this had happened. The Suez Crisis of 1956-57 resulted in a significant disruption in the flow of oil, and that had also been followed by an economic recession. There were quite dramatic increases in oil prices in 1947-48, and these were followed by the first of the postwar U.S. recessions. In fact, as of 1980, we’d seen seven recessions in the United States since World War II, and six of those had been preceded by a spike in oil prices. I thought, ok, maybe I should use this for my third-year paper.

As I was working on this topic, Iraq invaded Iran, knocking out even more global oil production, and sending oil prices to all-time highs. The National Bureau of Economic Research declared that the U.S. entered an eighth recession just 12 months after we got out of recession number seven. I thought, ok, maybe I should use this for my dissertation.

And so I did. I was resolved that once I finished the dissertation I was going to move on to other areas of research. But world events kept dragging me back. In 1990, after eight years of falling oil prices, and eight years without an economic recession, Iraq invaded Kuwait, knocking out two of the world’s biggest oil producers. Oil prices rocketed back up, and it was déjà vu all over again as the U.S. fell into postwar recession number nine. There was another dramatic move up in oil prices prior to the 2001 recession. And you’re all very familiar with the spectacular oil price spike of 2007-2008, which was as big in magnitude as any of these other episodes, and which was followed by what we have now come to refer to as the Great Recession. So the count is now up to 10 out of 11 postwar recessions were preceded by a spike in oil prices. I think there’s something to this.

But what could account for this apparent relation? It’s easy to write down a model in which energy shouldn’t be all that important for the economy. In a frictionless neoclassical model, the key parameter is the dollar share of energy out of total spending, and this is a relatively small number. According to neoclassical theory, equilibrium prices persuade firms and consumers to reduce their energy consumption in response to an exogenous disruption in supply, and any economic costs associated with voluntary reductions in energy use should be smaller than had the users decided just to pay the higher price and go on using energy the way they had been. The total economic loss should be less than the dollar cost of the lost energy.

But a frictionless neoclassical model won’t get you very far in understanding economic recessions no matter what kind of shocks you’re looking at. Most of us are persuaded that there are important inefficiencies associated with recessions, as labor and capital become underutilized relative to the efficient frontier. Once you start thinking along these lines, it’s easy to see how an energy shock could make a contribution. For example, we often see consumers suddenly stop buying the larger, less fuel-efficient vehicles that have historically been key to U.S. auto industry profits. Loss of income and layoffs in the auto sector then become a separate factor contributing to the overall decline in economic activity.

Certainly many of the economic developments in 2007 and early 2008 were consistent with the patterns in earlier oil shocks. Sales of larger vehicles plunged, and consumer sentiment and overall consumer spending responded to higher gasoline prices in much the same way we had seen them do in previous episodes.

But there was one important difference. Many of the historical oil shocks that I mentioned were associated with dramatic geopolitical events such as wars in the Middle East. But there were none of these in 2007-8. Instead what happened was global oil production stagnated even as demand from the emerging economies continued to surge, and this produced the dramatic spike in oil prices.

I think it’s clear today that this episode marked the beginning of a new era in which it has been hard for oil production to keep up with growing demand without big increases in oil prices. Since 2005, field production of crude oil has increased very little worldwide, with U.S. shale oil production accounting for more than 100% of the increase—in the absence of these new sources of supply, global production today would be lower than it was in 2005. Add to this the challenges of dealing with the consequences for the world’s climate of our fossil fuel consumption, and also add this week’s news coming out of Iraq, and it seems pretty clear that it is extremely important to study what is going on in energy markets right now, just as it was in 1980. So I think all of you are in the right place at the right time. The right place being the International Association for Energy Economics, the right time being June 2014. The world is in real need of the insights that each of you can bring to these challenges.

Thank you very much for this great honor. 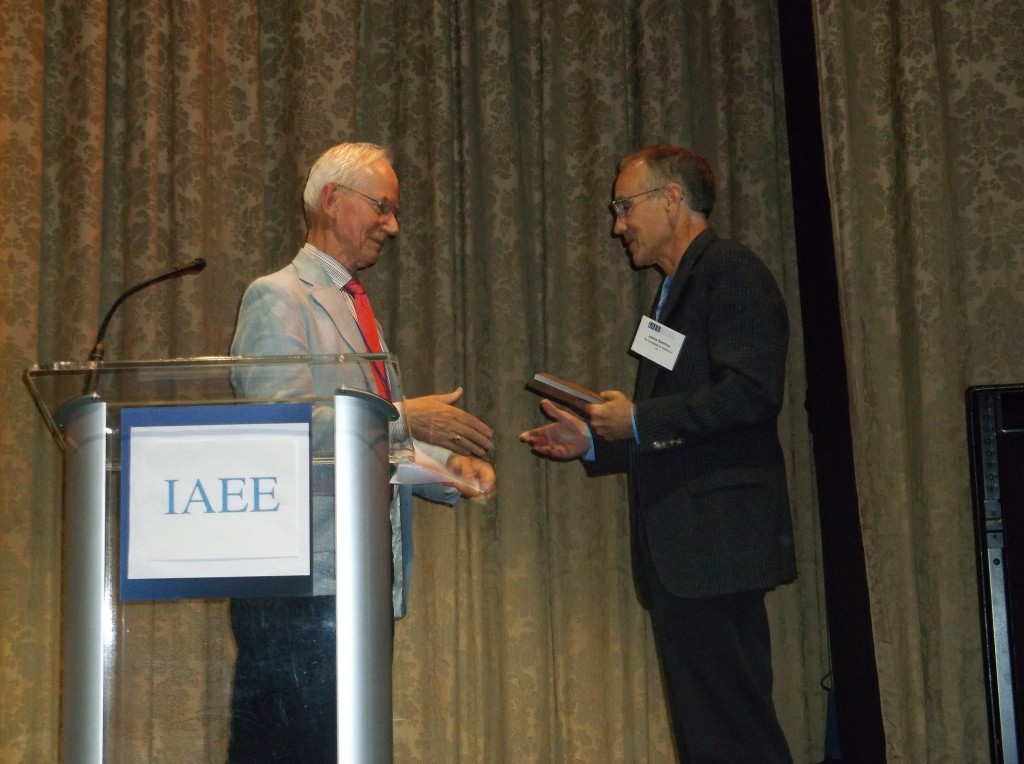 35 thoughts on “Energy and the economy 30 years later”