How tight is the labor market? A recent article summarizes the argument that wage pressures are building. From K. Madigan in WSJ Real Time Economics:

Economists now are debating whether the Fed has set its Nairu sights too low. And they point to two reports out Tuesday as proof.

The first report was the small business survey done by the National Federation of Independent Business.

Another sign that the U.S. is closer to full employment came from the Job Openings and Labor Turnover survey from the Labor Department.

The Jolts report showed a large gain in job openings in April. …

Since mid-2009, the Beveridge curve has shifted to the right. At every level of openings, the jobless rate is now higher–a possible sign of skills mismatch between the unemployed and the workers companies seek.

It also suggests the labor markets are tighter than implied by the jobless rate.

It may very well be that the labor market is signalling higher wage growth. However, those signals have not yet shown up in price indicators. Figure 1 depicts the costs from the productivity and costs release, as well as from the employment release. 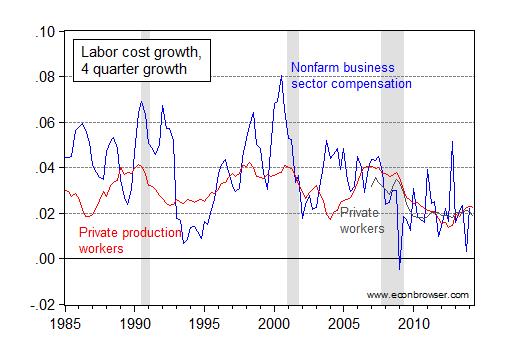 We have certainly seen higher wage inflation in the past.

In addition to muted compensation growth thus far, it’s interesting to observe that the level of unit labor costs, an important indicator of production costs (and hence price level trends) is only 1% (log terms) higher than they were half a decade ago. 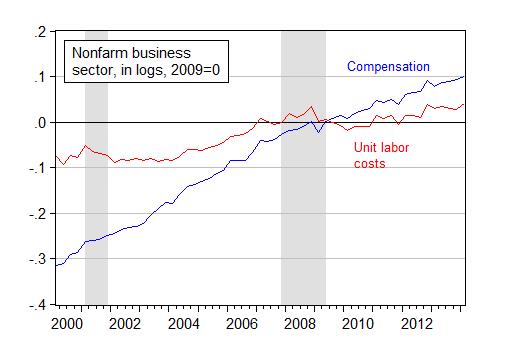 Hence, from my perspective, the case for an imminent surge in compensation costs has yet to be made.