Our new pro-growth tax policy will be like a shot of adrenaline into the heart of the Kansas economy. 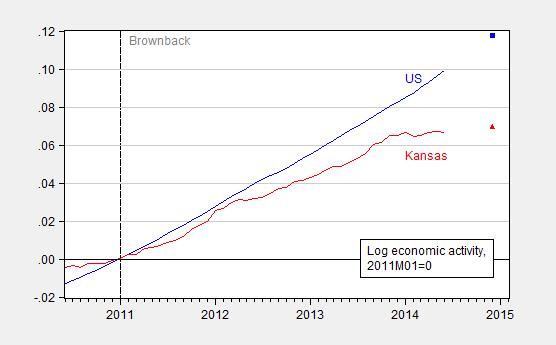 Notice the complete stagnation of Kansas output since January 2014, and deceleration starting from January 2013. 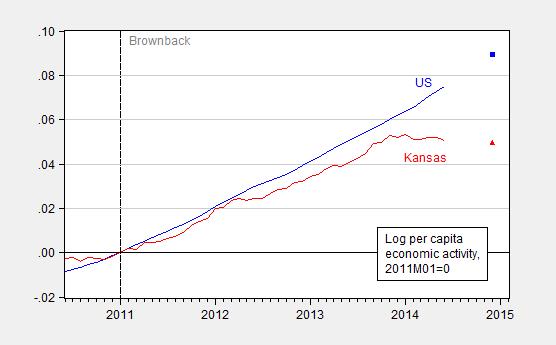 The forecasted trajectory for Kansas is fairly dismal. Some would say that this outcome is an artifact of the normalization date — that since Kansas fell less than the Nation, it should have bounced back more, or something like that. I’ve never found that “bounceback” argument particularly convincing, but be that as it may. In point of fact, Kansas fell more than the Nation, and has bounced back less. 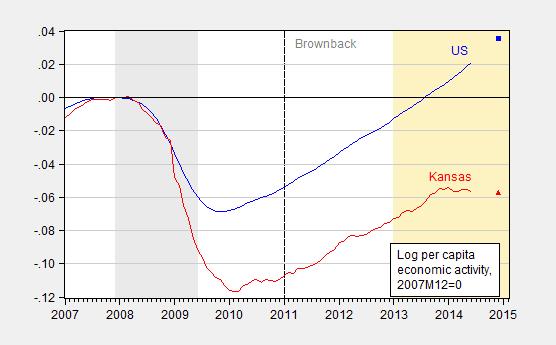 Why has Kansas output per capita stagnated, and in any case, declined relative to the Nation’s? One way of thinking about this is to take a supply-determined, or real business cycle, interpretation of output determination [1]:

Where Φ is total factor productivity, K is the capital stock, and N is the labor force.

If output is completely supply determined, then one has to think about the fact that the change in output must be attributable to either the change in total factor productivity, TFP (Φ), the capital stock (K), or the labor stock (N). That is (after taking logs, and assuming a Cobb-Douglas production function):

Where σ (1-σ) is capital (labor) share of income. Now as best as I can determine, population has continued to increase through 2013 (the 2014 figures are an extrapolation based on lagged population growth). There has been no war in Kansas that might have destroyed the extant capital stock, so it seems unlikely K has declined. This suggests that (with increasing population and likely increasing capital stock) there must have been technological regress — that is Φ must have declined. How? Perhaps some amount of Kansas technology has been destroyed. Another interpretation consistent with a supply determined view is that the first equation omits human capital, and somehow human capital has disappeared — and increasingly so, over the past year and a half.

Some New Classical interpretations would, strictly speaking, append an error term to output, to represent the fact that expectational shocks could drive output away from full employment of resources. However, to make the deviations serially correlated, either the expectational shocks must be serially correlated themselves, or there are real impediments to adjustment, such as capital adjustment costs or sticky prices (But going down that route would lead to a New Keynesian model, so let’s dispense with that).

Another possibility is that tax policy has changed the labor leisure tradeoff (the tan shaded area denotes the period in which the new tax regime was in place). Perhaps the wedge between pre-tax and after-tax returns to labor or capital have increased thus reducing the optimal levels of capital and labor employed. However, the entire point of the tax cuts implemented by Governor Brownback was to reduce the burden on households (particularly higher income households) and firms. In essence, there is a puzzle.

A Reconciliation of Facts and Theory

Page 13 of the Kansas State FY2014 Comparison Report indicates that for FY 2014 (which just ended) is 3.1% lower than FY2013; FY2015 will be 0.6% lower than FY2013. What about the trend in real spending? Since the CPI-Midwest rose 1.7% (y/y through June), then real spending fell 4.8%. Even more telling is that nominal economic activity probably rose about 3.3% through June (change in Philadelphia Fed coincident index plus change in CPI-Midwest). So that is a drastic fall in spending, when considered as a share of nominal GSP.

Update, 6PM Pacific: In a panagyric to Brownback, the WSJ has detached itself further from reality (if that is possible), in Why Liberals Hate Kansas: Sam Brownback’s tax cuts must be discredited before they succeed.:

By liberal accounts Kansas is experiencing a major fiscal and economic meltdown like well, you know, Illinois. The truth is that it’s too soon to draw grand conclusions about the tax cuts, which have been in effect for all of 19 months. But some early economic indicators suggest they may be producing modest positive effects. The danger is that a coalition of Democrats and big-spending Republicans will pull out the rug before the benefits fully materialize.

I found interesting the characterization of Illinois economic performance. The comparison of Kansas to Illinois is not flattering. Since I have read this comparison in the comments section in the past, here without further ado is the relevant comparison: 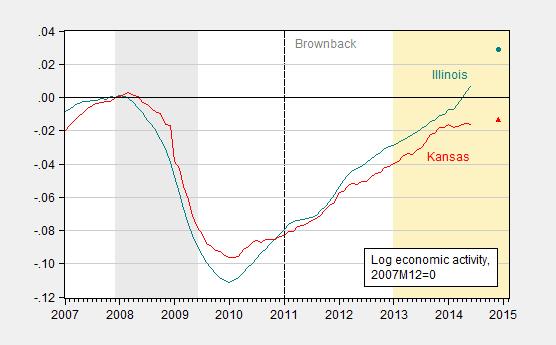