“…an ever-expanding government that chokes off economic opportunities for the middle class and those who aspire to it.

Time for some data. Figure 1 shows Federal government current expenditures normalized by the size of the economy. 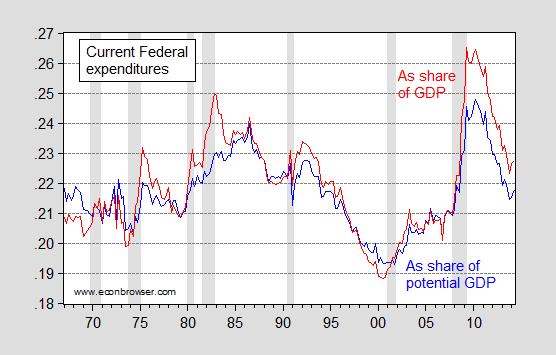 Federal government expenditures are now at 22.7% of GDP, far below the 25% recorded in 1982Q4 during the Reagan administration.

One point that all can agree on — even if there is no agreement on how to deal with the issue — is the deficient level of public investment. The American Society of Civil Engineers (ASCE) provided an assessment in 2013; their current estimated funding requirement through 2020 is $3.6 trillion. Figure 2 presents real investment as a log ratio to output. 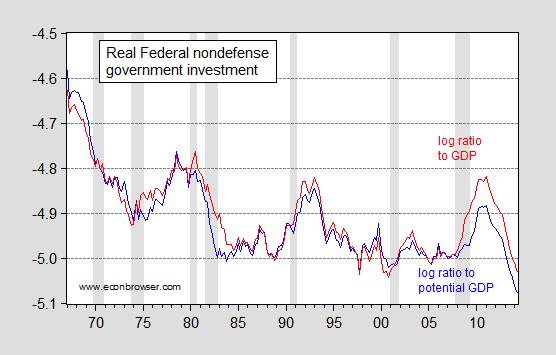 A lot of concern has focused on the decline in government investment in physical capital — bridges, roads, sewer systems, etc. That concern is focused not only on Federal investment but also state and local. I haven’t had time to generate the real investment ex-intellectual property products series, so I present in Figure 3 investment in structures and equipment as a share of nominal GDP. 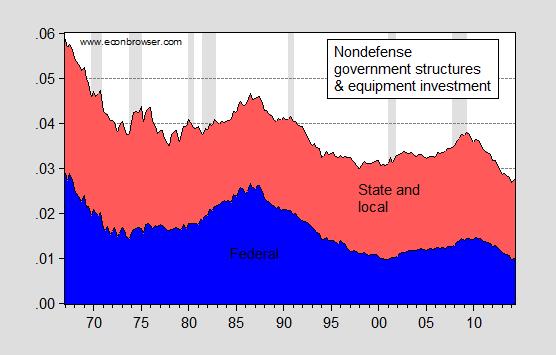 To me, the implications are clear. With borrowing costs extremely low, it makes sense to invest in infrastructure. Some disagree. Then, the question is, are you with Barry Eichengreen or Sarah Palin? By the way, despite talk of the taper, and incipient Fed tightening, borrowing costs for the government remain quite low; this is shown in Figure 4. 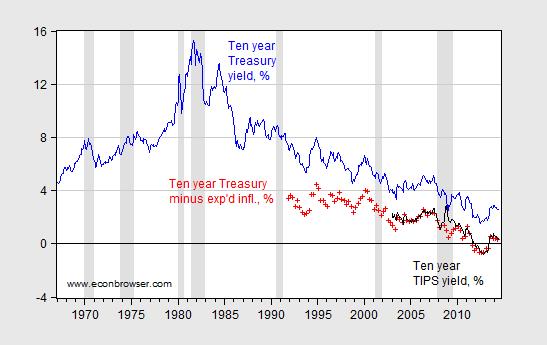 For a discussion of transportation investment needs and potential impacts, see this NEC/CEA report.
For previous installments in the series on the myths regarding the ever-expanding government, see [1], [2], [3], [4], [5].

52 thoughts on “The Ever-Expanding Government, Revisited”