Newcomers to macro often encounter problems in interpreting and using data. The first is how to report growth rates, particularly when trying to assess the current state of the economy. The second is how to read data reported at annual vs. quarterly vs. monthly rates. The third is accounting for the presence of breaks in data collection. (This post primarily for students in Econ 435 and Public Affairs 854.)

Suppose one wants to report annual growth rates, but one has a choice between using annual data or quarterly data. One convention applied to quarterly data is to use 4q/4q, that is the growth rate from the previous year’s 4th quarter to the current year’s. This calculation sometimes leads to similar growth rates, but sometimes does not. Consider a comparison of the years around the last recession. 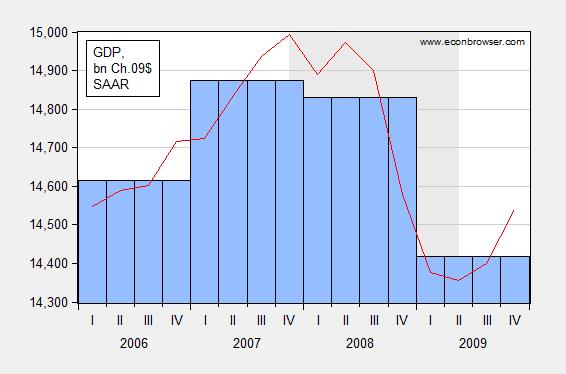 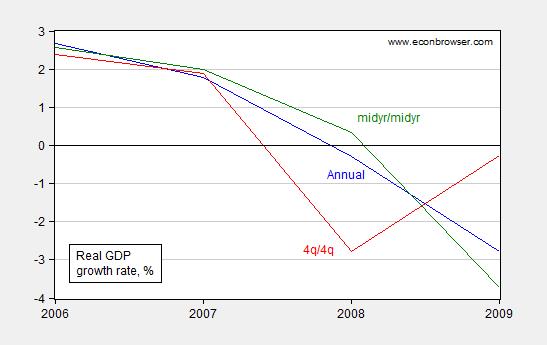 Oftentimes, one sees the term SAAR ascribed to a data series; this abbreviation stands for Seasonally Adjusted at Annual Rates. Typical US government macro aggregates are typically reported at annual rates — for instance the GDP levels (red line) reported in Figure 1 are at an annual rate — that is the level of GDP that would obtain if that rate of spending in that quarter continued for an entire year.

This is something that even University of Chicago macroeconomists can make mistakes with. As I pointed out at the time, if one is calculating a multiplier as the change in GDP for a given dollar amount of stimulus (ΔY/ΔG), for instance, one has to remember the GDP figure is reported at annual rates, while the stimulus figure was (in this case) reported at a quarterly rate. Paul Krugman also noted that if one forgets that growth rates (in the US) are typically reported at annualized rates, one can make a compoundingly embarrassing error.

And once one starts looking at foreign data, one has to be particularly attentive; quarterly GDP level and growth rates are typically reported at quarterly rates.

As government and international statistical agencies collect data, the mode of the data collection or the means of calculation sometimes change. Those changes are usually noted, but if one does not read the documentation, one can make serious mistakes. For instance, examining civilian employment (FRED series CE16OV), one would think there was a tremendous boom in employment in January 2000. 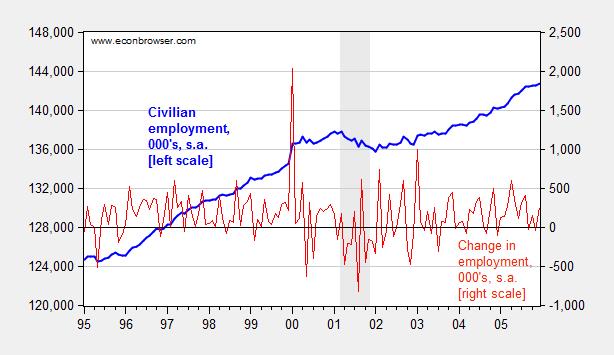 If one inspects other series, say nonfarm payroll employment, one sees no corresponding jump. This suggests the boom interpretation is wrong. Further evidence of a “break” is found by inspecting the first difference of the series (in red). The spike in January 2000 is a 1.5% change (m/m), while the the standard deviation of changes is 0.3% (calculations in log terms).

In fact, the jump is due to the introduction of new population controls associated with the Census. New controls are applied every decade, so this is a recurring (and known — to those who are careful) problem. Nonetheless, here’s an example of the mistake regarding the participation figure. Other breaks are less obvious. This is a cautionary note to all who download data without consulting the documentation.

In principle, real quantity = total value/price deflator. For instance GDP09 = GDP/PGDP09, where GDP is measured in $, PGDP09 is the GDP deflator taking on a value of 1 in 2009, and GDP09 is GDP measured on 2009$. In practice, there is a slight rounding error, which typically does not make a difference, but can if (1) growth rates are very high (or very negative), and (2) one is annualizing quarterly growth rates.

I used the manually deflated series for the 2008Q4 q/q calculation, when in this case it would have been better to use the real series reported by BEA to do the calculation.

Figures 4 and 5 show the rounding errors. 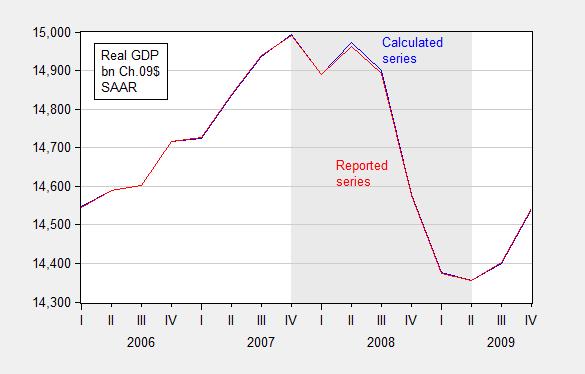 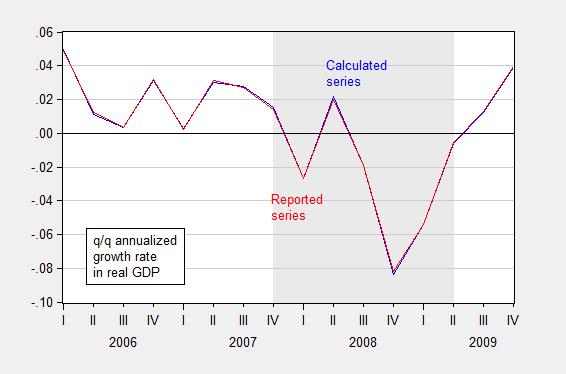