Bruce Bartlett brought my attention to this article, which Mark Thoma mused was “The Stupidest Article Ever Published”. From The Inflation Debt Scam, by Paul Craig Roberts, Dave Kranzler and John Williams:

To understand how risky the rise of debt is, nominal debt must be compared to real GDP. Spin masters might dismiss this computation as comparing apples to oranges, but such a charge constitutes denial that the ratio of nominal debt to nominal GDP understates the wealth dilution caused by the government’s ability to issue and repay debt in nominal dollars. …

I’m not a spin master, and yet I cannot help but dismiss this calculation as exactly comparing apples to oranges.

The authors present this figure to buttress their case: 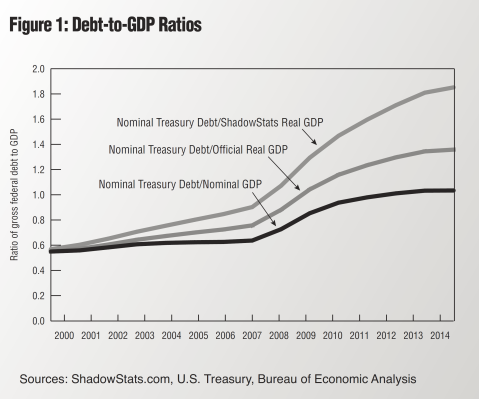 As far as I can tell, the article is merely an excuse for Williams to haul out the fully discredited “Shadowstats” one more time.

By the way, according to Shadowstats, the US economy has been shrinking nonstop since 2004-05, on a year-on-year basis…

So, if this is not the stupidest article ever, it is in the running (along with Don Luskin’s 2008 gem).