Instead of a 0.2% q/q increase as in the WSJ survey, GDP declined 0.4% [0] [1] It’s pretty bad news, but here are a couple of observations, following up on my previous post on Japan. 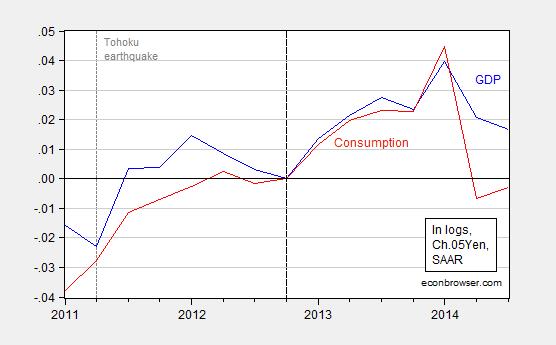 First, the drop is in output is definitely not a positive development. However, the good news is that the negative news should certainly solidify support for delaying the second part of the consumption tax increase. It should also rein in resistance to the expansionary monetary policy pushed by BoJ Governor Kuroda (well, I’m guessing — I’m not an expert on the intricacies of the BoJ).

What I find interesting is that exports, while not increasing much in the third quarter, have risen since the end of 2012. Assertions that the yen’s depreciation has not had a big impact on exports seem overdone to me (although it might be that one expected more growth in exports). 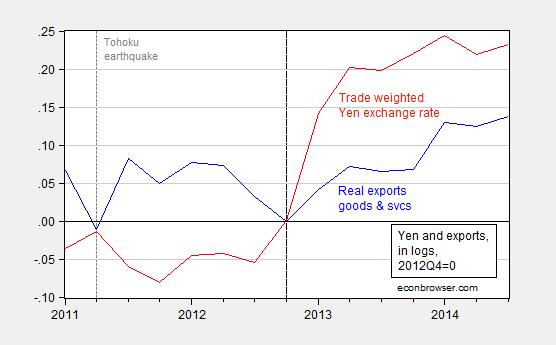 Export of goods and services in real terms have risen about 13.8% (log terms) since 2012Q4, while the yen has depreciated by 23.2%, on a trade-weighted, real terms, basis. That’s a ratio in changes of about 60%, not too far off my estimate of 0.66 long run elasticity of goods exports (see this working paper). Whether export behavior is in line with my estimates is not clear, since I have not factored in growth in Japan’s trading partners, which should have also pulled along exports.

Amiti, Itskhoki and Konings argue that the failure of goods exports to respond fully (at least through 2013) is because, based on their empirical work on Belgian firms, large exporters tend to be large importers, so that the yen depreciation has increased exporter marginal costs, thereby offsetting to a substantial degree the expansionary effects. I’m not sure how much that argument applies, as exports have grown measurably with the addition of 3 quarters of data.

One thing working in favor of future trade balance improvement is the recent decline in oil prices (particularly if combined with the restarting of nuclear power plants early next year [2]). 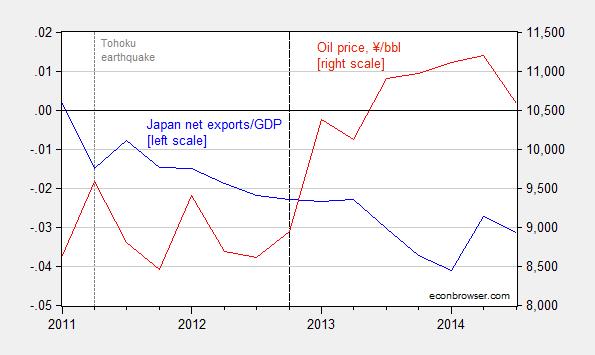 A final observation. Advance estimates of GDP are more than other releases “estimates”, so one might wonder how likely a positive re-assessment is. Unfortunately, Japanese GDP estimates have tended to be revised downwards over time (2 years out) [3] (Figure I.4). Thus, with the addition of more information, the drop might be larger in the end. That makes the case for expansionary monetary policy that much stronger.

More on the implications for policy from Jake Schlesinger/WSJ.

38 thoughts on “The Japanese GDP Release: The Bad and the Not so Bad”