From Bloomberg, a quote from the Governor’s speech in Detroit:

… I don’t think the U.S. should settle for anything less than 4 percent growth a year–which is about twice our current average.

I applaud the Governor’s aspirations. Here is a plot of what real GDP would have looked like had we had 4% annual growth (log terms) since 1967Q1 (in red), and if we’d had it under the administration of G.W. Bush (green). 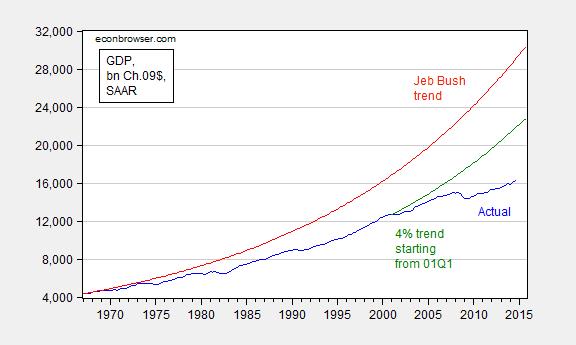 Well, if 500,000/month job creation is the norm (as Governor Mitt Romney asserted), why wouldn’t 4% growth be the norm? Just because it hasn’t happened yet, doesn’t mean it can’t.