This quarter we shifted to a new textbook for teaching undergraduate macroeconomics at UCSD, which is Macroeconomics by Stanford professor Charles Jones. Here are some of my reactions to the book.

At UCSD we now use Jones’s text in a two-quarter sequence for intermediate macroeconomics, with the first quarter covering long-run growth and the second, which I’m teaching this quarter, dealing with economic fluctuations. One of the things I like about the book is that it allows me to teach an empirically oriented course in which I can put more emphasis on the facts and less on stylized theories. Two full chapters are devoted to describing what happened during the Great Recession, which can serve as an extended case study around which much of the course can focus. To my mind that’s the best way to make the course interesting and relevant to students.

One innovation of Jones’s text is that it dispenses completely with the IS-LM framework, replacing it with a formulation that simply puts the central bank’s choice of the nominal interest rate as a starting point for studying the effects of monetary policy. This follows more closely modern theoretical treatments like Woodford (2003) and Romer (2000), is more consistent with how monetary policy is actually implemented, and saves the instructor the embarrassment of centering the theoretical structure on a concept of money demand that completely breaks down in describing the most recent data.

The text expresses more skepticism than many others about the efficacy of fiscal policy as a short-run tool for demand management, and is also unusual in including a serious discussion of long-term budget constraints. Personally that focus suits me well, though in this dimension it’s not a text that would appeal to Paul Krugman.

One certainly has to be impressed by Jones’s skill (almost paralleling Greg Mankiw’s) at finding a way to cut to the heart of very complicated issues and explain them in a very simple way– to read his text is to admire an artist at work. At times I worry though whether all the details left out will be a hindrance for the best students, and found I wanted to supplement the book’s treatment of topics such as the term structure of interest rates, the details of how monetary policy is implemented, and exactly how the “long-run” and “short-run” models are reconciled. What Jones and many instructors will have in mind is a log-linearization around a long-run growth model in which most of the coefficients have been set to zero for simplicity. But the book never communicates exactly what this entails, having for example taken great pains never to even use the term “logarithm”, plotting instead variables on what is called a “ratio scale”, and just introducing key parameters and “shocks” as defined ratios. I ended up following the text as written just taking the various shocks as given objects, but will want to give some thought next time I teach it to see if there’s another way to sketch for the better students exactly what is going on.

Overall, I’m very happy with the switch to the new text, and would encourage any teachers dissatisfied with the macro texts they’ve been using to give it a look. 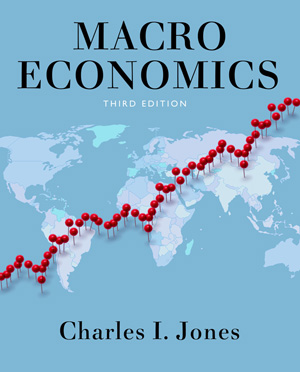 55 thoughts on “Review of Macroeconomics by Charles Jones”