Update: PolitiFact rates Governor Walker’s claim as “…not only inaccurate, but ridiculous. Pants on Fire.”

First, it was a drafting error. Now it’s not. 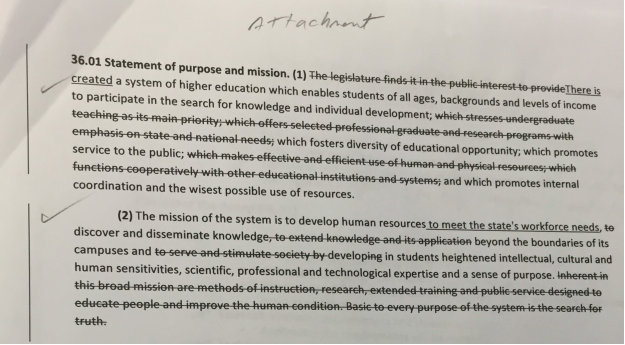 Excerpt from an attachment to a Dec. 30 email proposed the changes such as deleting the phrase, “Basic to every purpose of the system is the search for truth.”

As discussed in Wednesday’s post, the Governor had proposed deleting a substantial amount of text from the mission statement for the University of Wisconsin, including explicit removal of the “search for truth”. In a lengthy and detailed press release early on Thursday, the Governor related the chain of events leading to the drafting error.

“We encourage a vigorous debate over the idea of an authority to govern the University of Wisconsin system or the status quo, as well as a debate about what is the real amount of savings that can be generated by an authority, which we believe is worth $150 million a year. However, there is no debate over the principles contained within the Wisconsin Idea. We are, and have been, in agreement.

“So how did a change to the Wisconsin Idea get into the budget?

“While we had extensive discussions about the merits of an authority and about variations of how higher education is organized in other states, my staff, the state budget team, and I did not have much discussion about the mission statement. The only real mention was about adding something to existing language related to workforce development.

“Staff from the UW, the state budget office, and my office met several times to discuss the authority idea. In anticipation of these meetings, draft language was prepared by the state budget shop to serve as a starting point. At this initial meeting, my Chief of Staff directed the state budget office and the UW to continue working on statutory language changes and to elevate concerns or disagreements to his attention when agreement could not be reached. The guiding principle was to keep this process simple because the main focus was on providing the maximum amount of flexibility under the new authority.

“Staff from the UW System reviewed drafts of the budget language on various occasions, so I was surprised we had not heard concerns about the final version. Late on Wednesday, my Chief of Staff spoke again with UW System staff and found that they had raised a concern with the state budget office about the specific language. Unfortunately, when my office told the budget staff to keep it simple, they took that to mean that we only wanted workforce readiness language in the mission when we really wanted the language added to the existing mission statement. They also responded to UW staff that this change was not open for discussion because they were told to keep it simple and only add in workforce readiness language.

“Clearly, changing the Wisconsin Idea serves no purpose. That is why I made it clear on Wednesday that we would not change it in the budget. It is not a change of heart. It was a simple miscommunication during the natural back and forth of this process.

…In a rapid revision to his own comments on Wednesday, the Republican governor acknowledged that UW System officials had raised objections about the proposal.

They had been told the changes were not open to debate.

While backtracking on earlier comments to reporters, Walker continued to insist in a statement that he hadn’t known what his own administration was doing until after the proposal became public and caused a firestorm of criticism.

He said no one would be disciplined.

13 thoughts on “Walker vs. Walker”