The International Monetary Fund (IMF) provides in its bi-annual World Economic Outlook (WEO) report estimates of world GDP growth that are considered by experts in the field as benchmark figures when aiming at monitoring the global economy. In fact two wide exercises are carried out by the IMF each year in April and October, while two updates, which are light exercises, are released in January and July. All the WEO reports contain the annual world GDP growth for the current year (referred to as nowcast) and for the next year (referred to as forecast).

The latest update of the IMF WEO report has been released on the 20th of January 2015 and can be downloaded from the IMF web site. The salient fact of this report is that global GDP growth in 2015-16 has been revised downwards by -0.3pp both years, from 3.8% to 3.5% in 2015 and from 4.0% to 3.7% in 2016. Those revisions are mainly due to weaker than expected prospects in China, Russia, the euro area and Japan. It is noteworthy that the US is the only major economy to be revised upwards. Facing a huge oil price drop (more than 50% since June 2014) oil exporting countries have also been largely revised downwards.

It must be pointed out that nowcasting global economic growth is a huge challenge for economists. The main issue with those IMF-WEO nowcasts is that they reflect annual growth rate and are released on a quarterly basis, while obviously economists have at disposal a large set of data on the world economy available on a higher frequency (monthly, weekly or daily). Against this background, when aiming at nowcasting global growth on a high frequency basis (e.g. monthly), one faces two main issues: (i) a data-rich environment and (ii) a discrepancy between annual GDP figures, on the one hand, and monthly information, on the other hand.

In a recent Banque de France working paper we propose a new tool to address those issues and hence to evaluate contemporaneous global GDP growth in real time. Our methodology combines the Mixed Data Sampling (MIDAS) technology, which enables the use of high frequency data to forecast a variable sampled at a lower frequency (see here or here), with the factorial analysis as a reduction dimension technique (see here or here). Therefore the Factor-Augmented MIDAS modeling is twofold. In a first step, we aggregate a large monthly database including 37 countries and various sectors of the global economy into a small numbers of factors that summarizes the information. Then, in a second step we nowcast the annual world GDP growth rate using the monthly factors within the MIDAS framework. Our approach focuses on nowcasting the GDP growth figure of the current year from eleven months ahead, corresponding to January, up to the zero horizon, i.e. December. We evaluate our approach in an empirical exercise based on global output nowcasts of the IMF-WEO over the post-crisis period from January 2010 to December 2013. Our global growth monthly estimates of the current year are compared with those stemming from the successive releases of IMF-WEO reports (see Figure 1). 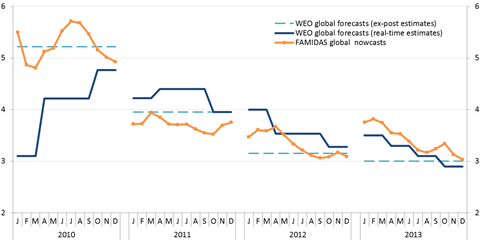 The results presented in Figure 1 show that the Factor-Augmented MIDAS approach provides reliable and timely nowcasts of the world GDP annual growth, especially at the beginning of each year when few information about the current year is available. The monthly update of the nowcasts constitutes a pertinent indicator of the world economic activity and efficiently tracks, on a high frequency basis, the global growth.

When looking at 2014 (see Figure 2), it turns out that our global growth index provides a good match over the year, with a decline at 3.3% in April, due to the weak data flow for the global economy in the first quarter of the year, mainly related to unusual weather conditions, especially in the US. It is striking to observe that the flow of data at the end of the year (November and December) implies a decrease in global growth nowcasts, due to a sequence of poor economic data in many parts of the world. 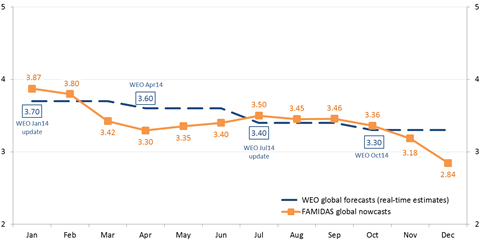 Figure 2: Monthly evolution of IMF-WEO real-time nowcasts of global GDP growth for 2014 and of our Factor-Augmented MIDAS model.

Last, the first estimates of global growth for 2015 that we get from our nowcasting model point to a slower growth than expected by the IMF WEO update of January. Indeed the estimates (computed using data available beginning of March) are of 2.8% for January and 3.0% for February. Those estimates are strongly influenced by the flow of weak economic data that we received over the last weeks but the estimate is likely to pick-up with upcoming data expected from Europe. However, we cannot exclude at this stage that the global economic growth in 2015 may be lower than 3.5% as expected by the IMF, in spite of the shot in the arm due to low oil prices and a booming US economy.

This post written by Laurent Ferrara and Clément Marsilli.