The highly integrated nature of the global financial system was amply demonstrated, if we needed any reminder, by the turmoil in emerging market currency and bond markets in the wake of Fed Chairman Bernanke’s statements regarding the normalization of U.S. monetary policy, i.e., the “taper tantrum”. Following close on the heels of complaints about unconventional monetary policy implementation in the preceding years, it is clear that – at a minimum – policymakers in emerging market economies perceive a high and increasing vulnerability to the whims of the global financial system.

The idea that the monetary policies of financial center countries have large spillover effects on the smaller economies is not new. During the mid-1990’s, when advanced economy central bankers raised policy rates, after several years of negative real interest rates, similar complaints were lodged, and some may partly trace the financial crises in Latin America and subsequently in East Asia to the cycle in core country policy interest rates. One key difference is that in the earlier episode’s aftermath, the semi-fixed exchange rate regimes were tagged as a contributing factor. In contrast, countries adhering to a variety of exchange rate regimes all experienced challenges in insulating their economies in the most recent episode. This has led to a grand debate about the continued relevance of the “impossible trinity” or “monetary trilemma”.

Since Mundell (1963) outlined the hypothesis of the monetary trilemma, fundamental policy management in the open economy has been viewed as policy trade-offs among the choices of monetary autonomy, exchange rate stability, and financial openness (e.g., Aizenman, et al. (2010, 2011, 2013), Obstfeld (2014), Obstfeld, et al. (2005), and Shambaugh (2004)). The hypothesis and its extensions suggest a continuous trade off between the three trilemma dimensions, with the possibility that a fourth policy goal, financial stability, may augment it and turn it into a quadrilemma, where international reserves may play a role as buffers.

In contrast, in the aftermath of the global financial crisis (GFC), Rey (2013) concluded that the economic center’s (CE) monetary policy influences other countries’ national monetary policy mostly through capital-flows, credit growth, and bank leverages, making the types of exchange rate regime of the non-CEs irrelevant. In other words, the countries in the periphery (PH) are all sensitive to a “global financial cycle” irrespective of exchange rate regimes. In this view, the “trilemma” reduces to an “irreconcilable duo” of monetary independence and capital mobility. Consequently, restricting capital-mobility maybe the only way for non-CE countries to retain monetary autonomy. The recent experience of Brazil, India, Indonesia, South Africa, and Turkey – the “Fragile Five” – during the so called taper tantrum may make for many observers the “irreconcilable duo” view convincing.

In Aizenman, Chinn and Ito (2015) we investigate whether Rey’s prematurely predicted the end of the trilemma. Inferences based data drawn from times of heightened volatility emanating from the center might be modified once we examine how the propagation of large shocks from the CE can be affected by economic structures and measures of the trilemma variables. In a world of more than hundred countries, one ignores heterogeneity at one’s own risk. For instance, the trade-offs facing the OECD countries may differ from those facing manufacturing based or commodity based emerging markets economies and developing countries. Furthermore, large shocks arising from the EC during the global financial crisis and the Euro debt crisis may have altered the transmission dynamics, especially in comparison to the preceding decade of illusory tranquility.

Figure 1 illustrates the 36- month rolling correlations of domestic money market rates with the U.S. money market rate for developed countries (IDC), developing countries (LDC), and emerging market economies (EMG), and China, from 1990 to 2013. For developed economies, the correlation between domestic and the U.S. policy interest rates is high and hovers at relatively high levels in the last decade. In contrast, developing countries tend to retain high monetary independence from the U.S., while emerging market monetary policy independence occupies a middle ground. All the correlations fluctuate, but experience two pronounced dips in recent years, one in 2005 and the other at the time of the global financial crisis. These two dips correspond to rapid changes in the U.S. Federal funds rate. 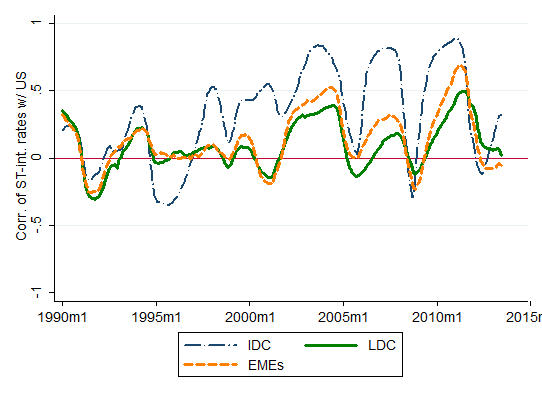 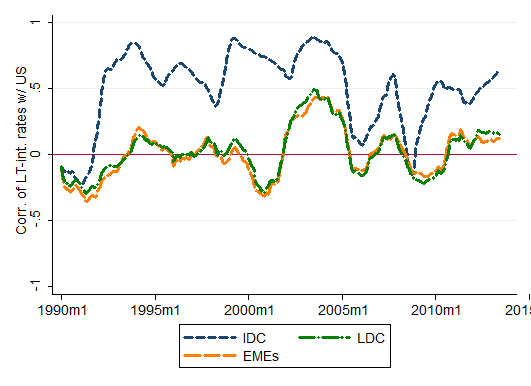 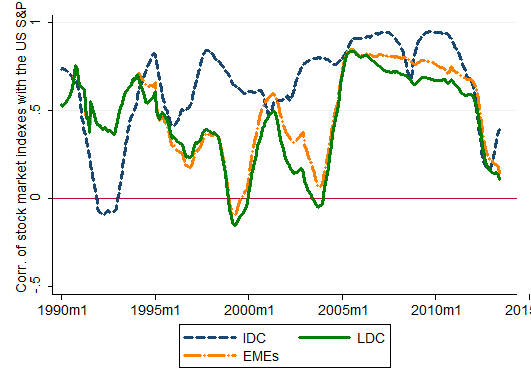 What do these figures tell us? Broadly speaking, the extent of correlations is the highest for stock market price movements, followed by the long-term and short-term interest rates. Given short-term interest rates bear lowest levels of risks, we may conjecture that the prices of assets with higher risk tend to be more highly correlated with that of the United States. Of course, these graphical depictions do not provide conclusive evidence, particularly since we have not controlled for any number of important factors, e.g., the policy regimes, macroeconomic conditions, the extent of trade linkage, the level of institutional development and size of financial markets, and global market conditions. Many studies such as Ahmed and Zlate (2013), Forbes and Warnock (2010), Fratzscher (2011), and Ghosh, et al. (2012) have documented the importance of global factors such as advanced economy interest rates and global risk appetite in affecting capital flows to small open economies. Nonetheless, these studies have also highlighted that domestic, country-specific factors also retain importance. In particular, the institutional and macroeconomic policy frameworks of the emerging market economies also determine the variations in flows.

Given this context, we focus on the questions of why movements in the major advanced economies often have large effects on other financial markets, how these cross-market linkages have changed over time, and what kind of factors contribute to explaining the sensitivity to the movements in the major economies. More specifically, we will conduct an empirical analysis on what determines the sensitivity of economies to factors pertaining to the core economies in the world, namely, the U.S., the Euro area, Japan, and China. For the last two decades, the Chinese economy has been growing at impressive rates and quickly moving upward on the development ladder. However, its financial markets may not be developed or sophisticated to the extent of becoming the center of global financial cycles. Despite data limitations as well as China’s relatively short tenure as one of the G3 countries, we will also examine whether our results are sensitive to the inclusion of China as one of the center economies.

For our empirical exploration, we employ an estimation process similar to that employed by Forbes and Chinn (2004), which is composed of two steps of estimations. First, we investigate the degree to which the sensitivity of several important financial variables to global, cross country, and domestic factors. Second, treating the estimated sensitivity as a dependent variable, we examine their determinants among a number of country-specific variables. In so doing, we disentangle roles of countries’ macroeconomic conditions or policies, real or financial linkage with the center economy, or the level of institutional development of the countries.

We find that for most of the financial variables we examine, the strength of the links with the center economies have been the dominant factor over the last two decades. The influence of global financial factors, for which we use VIX and Ted spread, has been increasing since around the time of the global financial crisis. The results we obtain suggest that, across different financial linkages, higher levels of direct trade linkage, financial development, and gross national debt all tend to lead to stronger financial linkages between the sample countries and the three center economies. Open macro policy arrangements such as the exchange rate regime and financial openness also affect the extent of financial linkage both directly and indirectly, i.e., interactively with other macroeconomic or institutional variables. Specifically, we do find that the types of exchange rate regimes do affect the extent of sensitivity to changes in financial conditions or policies in the center economies.

Rey’s (2013) result may reflect the dominance of the US leverage and deregulation policies that contributed to the GFC, as well as the dominance of the Fed’s policies in charting the onset of the tenuous recovery from the GFC. While there is no way for emerging markets to hide from the policies and challenges of the core, the details of the transmission of shocks and the resultant volatility are determined by the trilemma logic. Hence, the open macro policy choice is “still” dictated by the hypothesis of the trilemma. Therefore, the news about the irrelevance of exchange rate changes may have been exaggerated.

3 thoughts on “Exchange Rate Regimes and the Global Financial Cycle”