U.S. retail gasoline prices last week averaged over $2.80 a gallon, thirty cents higher than a month ago. The preliminary University of Michigan index of consumer sentiment for May was 88.6, down 7 points from the month before. Are these two developments related? 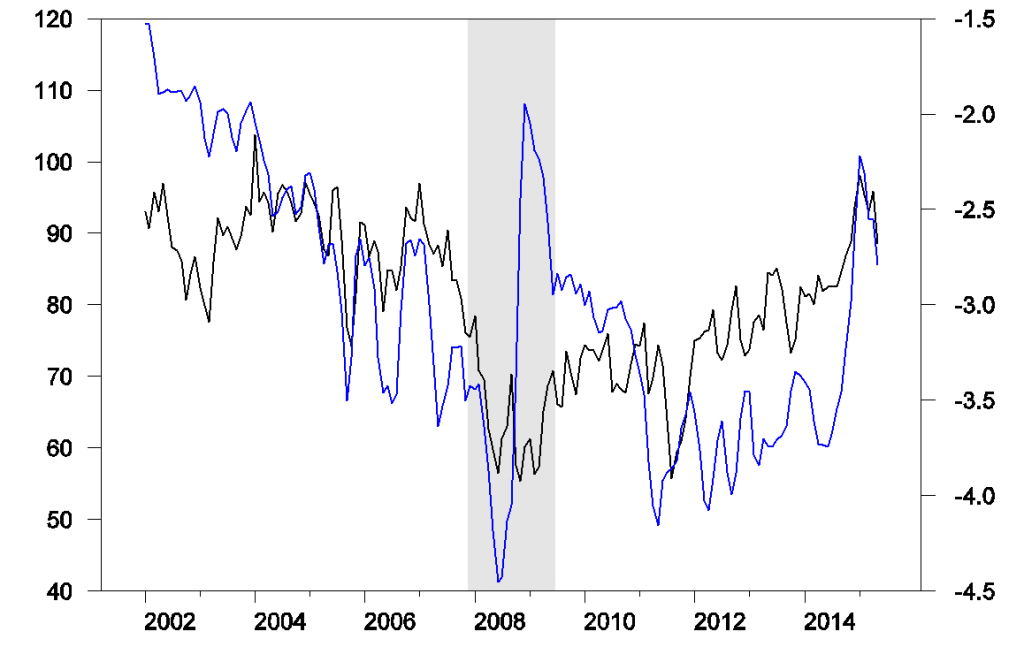 One quick way to describe the relation between these series is with a regression of each month’s change in consumer sentiment on that month’s change in the real price of gasoline. Results of that regression are reported below, with t-statistics in parentheses. If the monthly price of gasoline were to jump by $1.00/gallon, the regression would predict about a 5-point decline in consumer sentiment.

Although the coefficient is highly statistically significant, this is a much smaller response than had been found in earlier studies such as Edelstein and Kilian (2007). The relation appears to be significantly weaker in the more recent data than was seen in the older data. For example, if we estimate the regression using only data over 1978:M2-2007:M7 (the sample period used by Edelstein and Kilian), the coefficient is -12.0 instead of -4.9. Based on the data prior to 2008, we would expect about a 12-point drop in consumer sentiment if gasoline prices rose by a dollar.

Referring back to the figure above, we can see what seems to have happened. The first time gasoline prices reached $3.00 a gallon in September 2005 (or $3.50 a gallon in 2015 dollars), consumers appeared to be shocked. When it happened again the following summer, the decline in consumer sentiment was much more muted. And when the threshold was crossed a third time the following year there seems to be barely any response. It was only when prices went on to new highs (to over $4.00/gallon in 2008) that it seems to have again caught consumers’ attention. Nonetheless, when gasoline prices plunged as the recession worsened, it brought little cheer– consumers by then had bigger things to worry about. It is only in the data over the last year that the two series are back to tracking each other as closely as they had seemed to a decade ago.

If we use the full-sample coefficient estimate of -5, the 30 cents/gallon increase since April would have been expected to be associated with a 1.5-point drop in consumer sentiment. Even if we used the coefficient of -12 from the earlier data, we would still have only expected to see a 3.6-point drop in consumer sentiment, only about half of what was actually observed.

My conclusion is that rising gasoline prices surely contributed to the recent decline in consumer sentiment. But I suspect that other factors are more important.