Today we are fortunate to have a guest contribution by Helen Popper, professor of economics at Santa Clara University.

A country or state – such as, say, Greece or California – without its own currency can’t choose its own monetary policy. Nor can a financially open country that tightly fixes its exchange rate to another country’s currency. In contrast, a country, such as the United Kingdom, with a freely floating exchange rate can choose its own, sovereign, monetary policy. While other countries might influence its policy, they don’t constrain it. The United Kingdom has monetary sovereignty – the ability to conduct its own monetary policy without being tightly tethered to another country’s policy. Monetary sovereignty is what allows countries to direct their monetary policies at their own domestic economies.

Economists aside, heated political controversy in many countries – including Argentina, Greece, Iceland, and the United Kingdom – suggest that people on the street believe monetary sovereignty is real and that it’s relevant. Are they wrong? Does monetary sovereignty no longer matter?

Some countries do indeed enjoy a great deal of monetary sovereignty, while others don’t. We can compare their experiences using recent data. Then, we can ask: have the two groups fared the same?

Below are some basic, macroeconomic comparisons using a sample of 33 emerging and advanced economies. Monetary sovereignty is measured using the techniques in Popper, Mandilaras, and Bird, European Economic Review, 2013. (More on sovereignty measures later.) The remaining, standard data are described in Parsley and Popper, 2015. 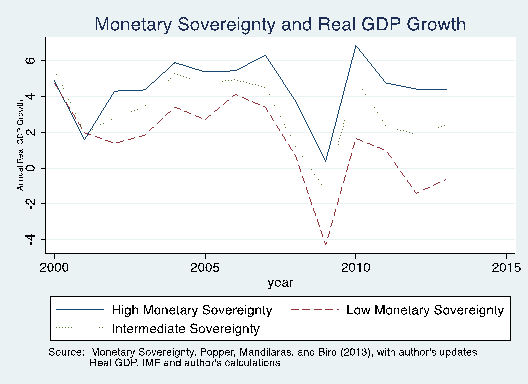 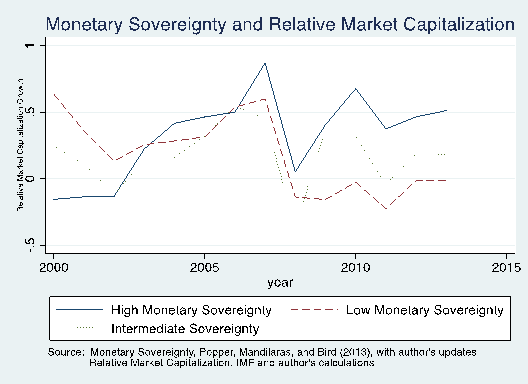 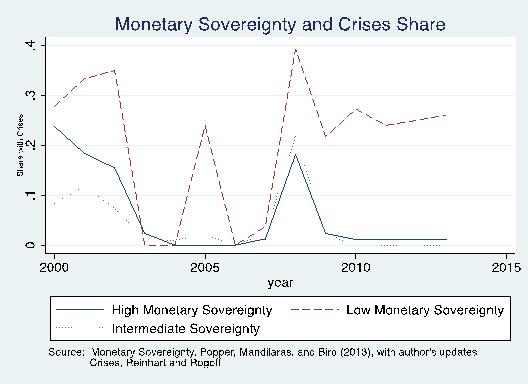 The third figure depicts the incidence of financial crises for each level of monetary sovereignty. The crises are taken from Reinhart and Rogoff’s revised crisis data, and included are: currency, inflation, stock market, banking, and both sovereign and external debt crises. The share that is shown is the number of crises in each sovereignty group divided by the number of countries in each sovereignty group. (The picture is mostly similar when currency crises are excluded.) The figure shows that a disproportionate share of recent crises has occurred in countries lacking monetary sovereignty.

If it weren’t for the recent skepticism of monetary sovereignty, these differences might not be surprising. After all, when a central bank can choose its own monetary policy, one might expect it to choose one that serves its country well, at least in the short term.

In ongoing work, I find that these differences, including the inflation difference, are statistically significant at standard confidence levels. Despite financial globalization and for whatever reasons, the recent economic experiences of countries with and without monetary sovereignty have differed significantly. In other words, they have not fared the same.

The measures of monetary sovereignty used in the figures above come from Mundell’s classic trilemma: countries enjoy monetary sovereignty only if they give up exchange rate stability or financial openness. Mundell’s trilemma implicitly defines a gauge of monetary sovereignty that can be constructed from data on exchange rate stability and financial openness. The construction of this trilemma gauge is described in complete detail in Popper, Mandilaras, and Bird, European Economic Review, 2013, and in a working paper. The underlying data come from Aizenman, Chinn, and Ito (2010 and 2013, described here).

Consider the response to the financial crisis. The Federal Reserve aggressively lowered interest rates. So did many other central banks; but not all of them lowered their rates because the Fed did. Some simply lowered their rates because it seemed like the best response to the crisis, irrespective of the Fed’s response. The result is correlated interest rates, but it would be a mistake to take the correlation as evidence of relinquished sovereignty. (Nick Rowe makes this point about Canada.) 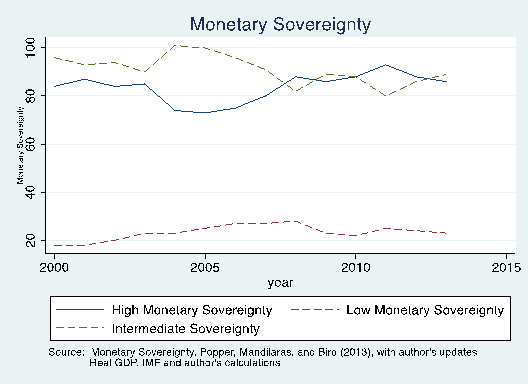