U.S. oil production has begun to drop in response to low oil prices, but not as dramatically as many had anticipated.

Oil companies have cut back spending significantly in response to the fall in the price of oil. The number of rigs that are active in the main U.S. tight oil producing regions– the Permian and Eagle Ford in Texas, Bakken in North Dakota and Montana, and Niobrara in Wyoming and Colorado– is down 58% over the last 12 months. 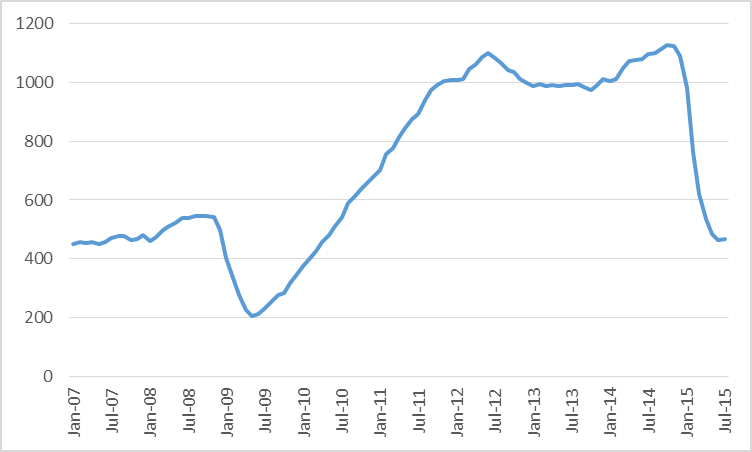 Nevertheless, U.S. tight oil production continued to climb through April. It has fallen since, but the EIA estimates that September production will only be down 7%, or about 360,000 barrels/day, from the peak in April. 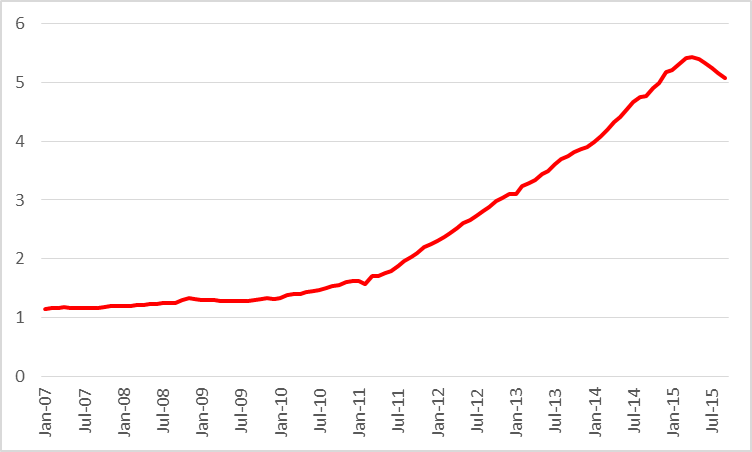 This is despite the fact that typically output from an existing well falls very quickly after it begins production. The EIA estimates that tight oil production from wells that have been in operation for 3 months or more has declined by 1.6 mb/d since April, as calculated by the sum of the EIA estimated monthly declines in legacy production from May to September.

One would think that these decline rates from existing wells and the drop in the number of rigs drilling new wells would mean that production would have fallen much more dramatically. Why didn’t it? The answer is that there has been a phenomenal increase in productivity per rig. For example, the EIA estimates that operating a rig for a month in the Bakken would have led to a gross production increase of 388 barrels/day two years ago but can add 692 barrels today. 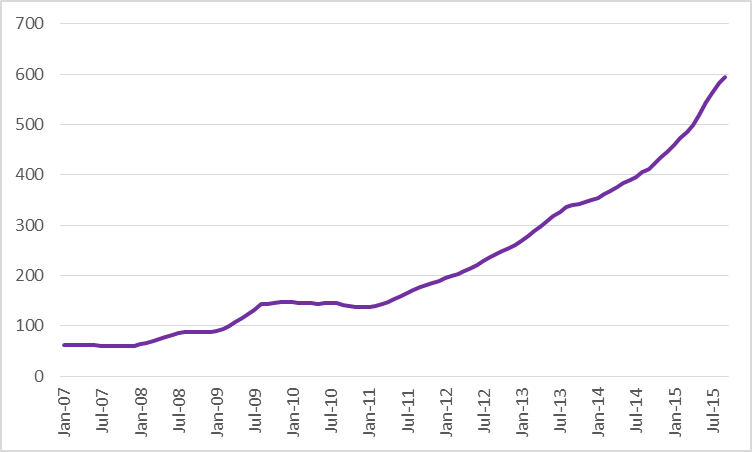 A key factor in the productivity gains is that companies are finding ways to complete wells faster, so that more wells can be drilled each month from the same number of rigs. For example, The Barrel reports that Occidental Petroleum “has seen a 40% decrease in spud to rig release time in the Wolfcamp area of its Permian holdings from 43 days in 2014 to 26 days in March this year with a target of eventually reaching 16 days.”

The modest drop in U.S. production has been enough to start to bring inventories down. U.S. crude oil stocks last week were down more than 30 million barrels from April. But that still leaves them way above normal.

The drillers’ cash flow is assisted not only by the improvements in efficiency just mentioned but also by the fact that the drop in demand for rigs means companies are seeing drops in day rates and other costs. Even so, major shale producers like EOG, Whiting, Pioneer, and Devon reported before-tax losses each of the last two quarters.

West Texas Intermediate averaged $53/barrel the first six months of this year. Last week it went as low as $38 before rebounding back to $45 by the end of the week.

Losing money is obviously not a sustainable business model, yet inventories have to come down further. Meanwhile, elsewhere in the world, Iraq oil production is up half a million barrels a day from a year ago, and Iran hopes to raise oil production by up to a million barrels a day once sanctions are lifted. Economic prospects for China, the world’s second-biggest oil consumer after the United States, are cloudy.

Another part of the adjustment process is also underway, coming from the big cuts in capital expenditures for exploration and production for more conventional oil fields. This will also affect supply, but with significantly longer lead times than is the case of production of tight oil.

Gains in efficiency, lower costs of inputs, and, in the case of production outside the United States, appreciation of the dollar have all helped lower the marginal cost of producing oil. Even so, the current price is well below the marginal cost, meaning one of two things has to happen. Either the price must rise or output from the higher-cost producers must fall further.