Today we are fortunate to have a guest contribution by Robert J. Schwendinger, former Executive Director of the Maritime Humanities Center of the San Francisco Bay Region, and author of the newly republished volume Ocean of Bitter Dreams: The Chinese Migration to the United States, 1850-1915 (Long River Press).

In my work, Ocean of Bitter Dreams, I document the workings of imperialist economics for a critical era in trans-Pacific relations. Those nationals in China — the British, French, Spanish, Dutch, Prussians, and many Americans — preyed on vulnerable Chinese during the formative years, and reaped unimaginable fortunes for that time.

My book traces the actions of Americans who participated in the Opium Wars, the “coolie” trade — essentially a parallel slave trade — and the treatment of immigrating Chinese to the United States. Their attitudes are bound irrevocably to the exclusion of Chinese well into the 20th Century.

Opium was a prime merchandise of the age. By the time the Emperor directed Prince Kung to move against the illegal importation along the coast, the complex network was virtually impregnable. The Imperial Navy was a ghost of its former self, suffering from measures taken in the Fifteenth Century to reduce the high costs of a grand navy. Existing vessels were few, slow, and ineffective.

Interests as far as half a globe away depended on the illicit opium. Bengal received over half its revenues from the cultivation and sales, as traders, shippers, captains, bankers in England, the United States, and Portugal, reaped ever increasing profits from its distribution. American’s share of the drug was approximately twenty-percent, taking the lion’s share from Turkey. Leading American traders such as Samuel Russell and Company and John Jacob Astor were part of an interlocking, mutually supporting network that included among other New Englanders, John P. Cushing, and the Perkins brothers.

Prince Kung, a key statesman in the late Ching dynasty, attempted to put a halt to the traffic in 1839. He appointed Commissioner Lin Tse-Hsu to carry out a firm policy against the opium trade. Lin wrote Queen Victoria, and asked why she was forcing opium on the Chinese even as she forbade her own people to smoke the drug. He asked if there was no end to Britain’s desire for profit. After receiving an unsatisfactory reply, Lin set out to destroy 20,283 chests of opium that were confiscated from foreign factories at Canton, eight floating depots, and coastwise clippers. The 3,564 pounds of “black dirt,” worth about ten million dollars at that time, was pulverized on platforms suspended across huge trenches, then laborers stirred the residue in water, salt, and lime. Boiling from the volatile mixture, the trenches looked like great scalding furnaces; the stench was overwhelming in the intense heat of the Canton Delta. It took two months to collect the valuable contraband and thee weeks to dispose of it. In anticipation of the wholesale destruction, Commissioner Lin prayed to the God of the Sea, appealing to all sea creatures to seek safe harbors until the “poison” dispersed throughout the seas.

Shortly after the destruction of opium, England sent the largest expeditionary force ever witnessed in Chinese waters. The first Opium War led to another in 1856, then in 1860 British and French troops destroyed the magnificent and singular treasure house of China, the incredible Summer Palace outside Peking. Palace grounds included forest, gardens, man-made lakes, bridges, and a compound of two hundred buildings, many roofed with gold. They were filled with the finest silks, jade, gold ornaments, rare art, and irreplaceable libraries. In a highly symbolic act, comparable to the sack of Rome by the barbarians, those armies looted and reduced to ruins what took centuries of Chinese culture to produce.

After approximately eleven years of hostilities, gunboat diplomacy wrested over fifty million dollars in indemnities; ceded the island of Hong Kong to Britain, including the New territories, 376 miles of mainland, islands and bays; and granted extra-territoriality rights to the allied powers.

The agreements that grew out of China’s bitter experience have been described as the “unequal treaties.” Eventually all Western shipping was freed from Chinese control in her own waters. The five Treaty Ports that were granted after the first Opium War eventually grew to eighty by the end of hostilities. Missionaries were accorded freedom to proselytize anywhere, and opium was blessed with legal status, becoming the prime merchandise of the age. Imports increased over three hundred percent in ten years. 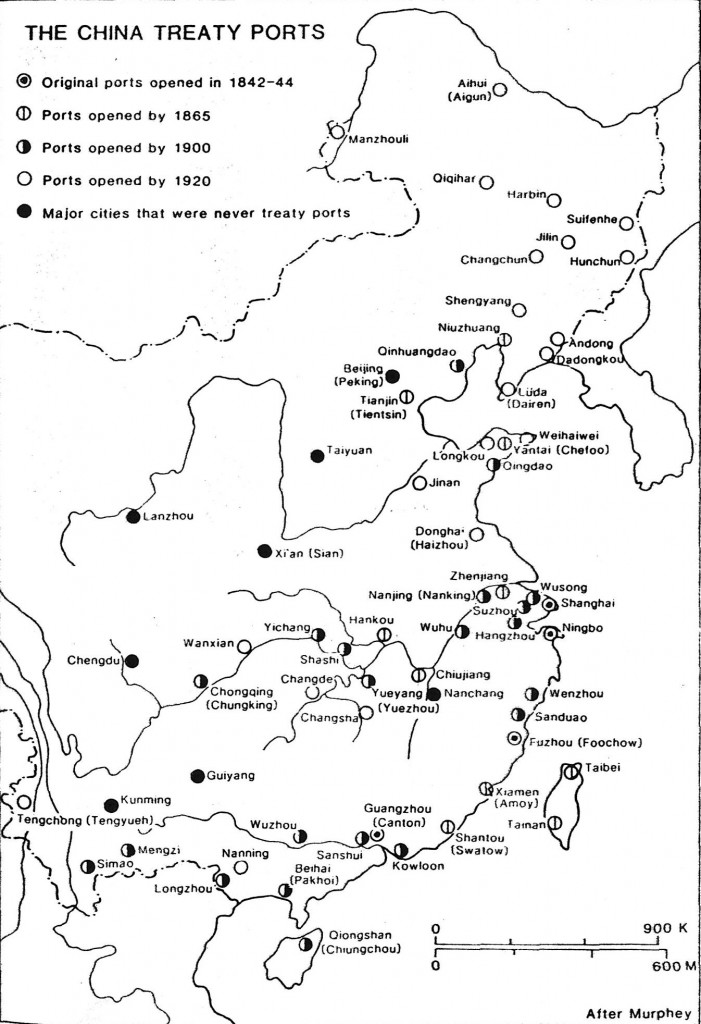 Figure 1: Five Treaty ports were opened to foreign trade in 1842 as a result of the first Opium War: Canton, Amoy, Foochow, Ningpo, and Shanghai. The number eventually grew to more than eighty. The Liu-chiu Islands, or Lew Chu, is currently the Ryukyu Archipelago.

The unequal treaties drove China into a position of astonishing vulnerability. The infamous “Coolie Trade” would not have been possible without the opening of all those treaty ports and the granting of those extraordinary rights.

Hong Kong was an economic and symbolic prize. It depended on the distribution of opium, the increase of Chinese residents, a large percentage of import/exports between China and other countries, the emigration movement, and the manufacturing of chains and other restraints that were used in the “Coolie” trade.

While African slaves were being freed in the United Kingdom and South America, the “Coolie Trade” grew out of the desire to supplement or replace the slaves. The term “Coolie,” became the derogatory designation for cheap, mostly servile labor.

The discovery of gold in California attracted Chinese as immigrants, as were populations in other parts of the world. There grew out of the movement those Chinese who were considered “free” emigrants, who were able to pay for their tickets to the United States, as distinguished from “coolie” immigrants, in the belief that the ability to pay for the voyage was a qualitative difference between the two. Those without the ability to pay and entrusted themselves to contractors or were deceived into shipping out, were sent to the Sandwich Islands, Mauritius, Panama, Peru, Brazil, and the West Indies. They were looked upon as “coolie” and maligned with a host of descriptions, from “voluntary slaves” to a “degraded class of semi-barbarians.”

As attractive were the rewards from opium for British, French, Portuguese, and Americans, especially, the rewards for recruiting unsuspecting Chinese men and boys were just as high. Shippers and captains depended on unscrupulous brokers to entice Chinese to the ports, as they were either lied to, kidnapped, or duped into signing false labor contracts.

In some ports, far from the arm of Chinese law, barracoons, not unlike those that dotted the African coast, were erected to hold the vulnerable males and they were monitored by armed guards. Approximately three-quarters of a million men and boys ended up in the “coolie” trade.

Richard Henry Dana, author of Two Years Before the Mast, while in Cuba, witnessed the selling of males in the marketplace. He wrote that the price paid for a Chinese laborer was $400.00.

The sailings of American vessels, carrying from 244 to 500 souls each, were plagued with disastrous events. Many Chinese rebelled against their captors. Numerous Chinese died from being fired on or kept secured in the hold of ships and suffocated. Many became lost in tumultuous weather, and untold numbers died before they could outlive their service. The case of the Robert Bowne, the most documented “coolie” ship and throughly developed in this book, provides particular insight into the deadly trade.

In my studies, I identified thirty one American vessels involved in the trade. Many of them were famous clipper ships of the period, Swordfish, Sea Witch, Winged Racer, and Live Yankee. In addition, there are at least 116 more American ships under sail that were tallied by a port official in Cuba. Add to that incredible number those vessels that brought human cargoes to the Chincha Islands of Peru, Brazil, Panama, Mauritius, and others. As the trade became more disreputable, Western nations gradually withdrew, and the Americans who participated became major transporters.

Even then, my tabulation of the ships involved is assuredly incomplete. The ocean can never reveal its dead: those ships that shipwrecked, those Chinese who rebelled and were killed, those vessels that had registered false names at ports of arrival, those captives who committed suicide where they labored or became sick and useless on board and were thrown into the sea, the vessels that ship owners managed to keep out of Lloyd’s Register of Ships, and those Chinese who would never grace a ship’s passenger list, or have a death certificate signed for them, nor would so many be remembered for their presence, trapped forever in that malevolent trade, would never be known.

“Coolie” activity commanded profits that were staggering for the time: an approximate $300 million was earned overall; the Americans share was an approximate $140 million or the 1988 equivalent of approximately $1.5 billion [or 2014 equivalent of about $3 billion, using the CPI to adjust]. The number of American voyages more than likely approximated 900 over the period, requiring a remarkable movement of vessels for any time.

The ships under sail transporting Chinese immigrants to California in particular, loaded their human cargoes with little concern for the comfort of their passengers. Charging as much as the passage would allow, ship owners earned unprecedented fortunes. The same conduct carried over into the transportation on board the great transpacific steamships that began to monopolize the route between China and the United States. The two foremost steamship lines were the Pacific Mail and the Occidental and Oriental, registered as California corporations.

American politicians, unions, and newspapers, particularly in the West, concentrated their scorn on what they considered an inseparable triad: the “China ships,” as the transpacific steamships were called, the Chinese passengers who traveled in them, and the Chinese crews that manned them. Immigrant, ship, and sailor bore the bitter attacks of slander and hatred.

Antipathy toward Chinese culminated in the passage of the Chinese Exclusion Act of 1882. Tightened restrictions of the Act continued well into the 20th Century.

The seeds of failure for a prosperous China Trade were being planted during the years in which western nations treated China as a semi-colony, taking as much as they could get and giving little or nothing in return. The failure was also precipitated by the nations in which Chinese nationals were exploited for their labor, but denied universal rights and protections.

The story of Commissioner Lin Tse Hsu and his destruction of the great quantity of opium in 1839 is as important to Chinese history as the Boston Tea Party is to the United States; and although Lin’s actions precipitated defeat by the Western powers, the national humiliation China and Chinese suffered for almost a century is partly responsible for the two revolutions in modern times. With an emphasis on its own needs, China will assuredly measure each petitioner for respect. That nation’s history also suggests the need to be especially aware of challenges to its sovereignty.