The strong October employment report makes it look likely that the era of zero interest rates will soon come to an end, at least for the United States.

This raises an interesting question for economic researchers of how we bridge statistical models through the episode when the fed funds rate was not a useful summary of monetary policy. I continue to recommend the idea of a shadow fed funds rate that may be negative. Research by University of Chicago Professor Cynthia Wu and Merrill Lynch researcher Dora Xia that will shortly appear in the Journal of Money, Credit, and Banking developed convenient closed-form expressions for magnitudes such as forward rates and risk premia for this model. Here’s the latest value for their series, which had risen to -53 basis points prior to last week’s news. 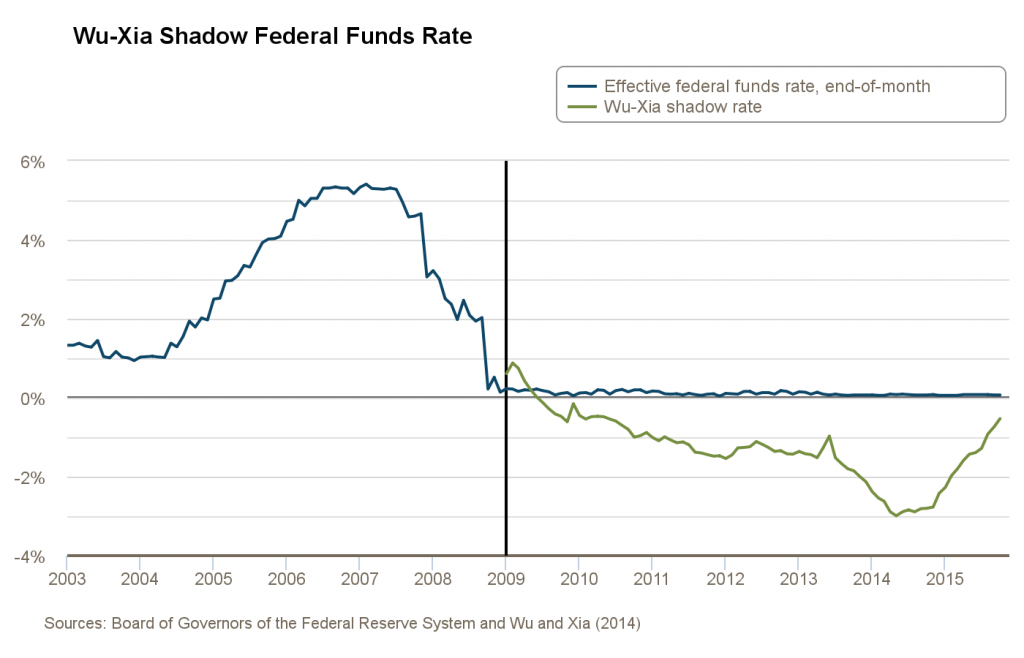 I was at a conference on interest rates at the Federal Reserve Bank of San Francisco last week where a couple of other interesting approaches to modeling interest rates across the zero lower bound were also presented. Fulvio Pegoraro of the Bank of France presented a very nice paper with co-authors Alain Monfort, Jean-Paul Renne, and Guillaume Roussellet that found ways to make the intriguing autoregressive gamma-zero specification quite tractable for many of the questions analysts want to ask of these data. Bruno Feunou, Jean-Sebastien Fontaine, and Anh Le described an alternative tractable approach.

25 thoughts on “Preparing for lift-off”