Today we are pleased to present a guest contribution written by Carlos Arteta, M. Ayhan Kose, Franziska Ohnsorge, Marc Stocker, and Lei Sandy Ye, all of the World Bank. This blog represents the views of the authors and does not necessarily represent World Bank Group views or policy.

In a widely anticipated move, on December 16, 2015 the U.S. Federal Open Market Committee (FOMC) increased the target range of the U.S. federal funds rate by 25 basis points. Expectations around the first interest rate hike in nearly a decade were well managed, and the accompanying communications from Fed policymakers point to a very gradual tightening cycle ahead. Emerging market assets and currencies did not react much to the news, but these have been in liftoff mode ever since the “taper tantrum” in May 2013, so much of the adjustment had already taken place.

Should we conclude that the Fed tightening cycle will be a non-event for emerging markets (EM)? Probably not. The first step has undoubtedly been a success so far, but it will be a long process before U.S. interest rates reach a “new normal”. There is considerable uncertainty regarding how EMs will adjust to it. In this blog, we seek to answer three major questions that should help assess whether EMs should expect smooth sailing or brace for stormy waters during this tightening cycle:

1. How have growth prospects and policies evolved in advanced countries?

Growth in G4 countries (the United States, the Euro Area, Japan, and the United Kingdom) more than doubled from 2013 to 2015, while U.S. labor markets have strengthened markedly (Figure 1). These developments provide considerable support to EMs, not only through trade and financial channels, but also by supporting confidence and keeping risk premia low.

Given that the normalization of U.S. monetary policy primarily reflects strong domestic fundamentals and notable improvements in labor markets, the positive trade and income effects for EMs could potentially offset upward pressure on borrowing costs. Figure 2 illustrates the difference in the impact of higher U.S. bond yields driven up by a positive U.S. “real” shock compared with those that represent a negative U.S. “monetary” shock. “Real” shocks reflect continued improvements in U.S. economic activity; while “monetary” shocks reflect a tightening in U.S. monetary conditions in the absence of real-side improvements.

Higher U.S. yields driven by “real” shocks have more benign implications for EMs: stock markets and activity in emerging markets improve following such shocks, while they worsen when rising U.S. long yields are driven purely by negative “monetary” surprises. In other words, higher U.S. yields should not be detrimental to EMs as long as they are driven by improvements in the U.S. economy. 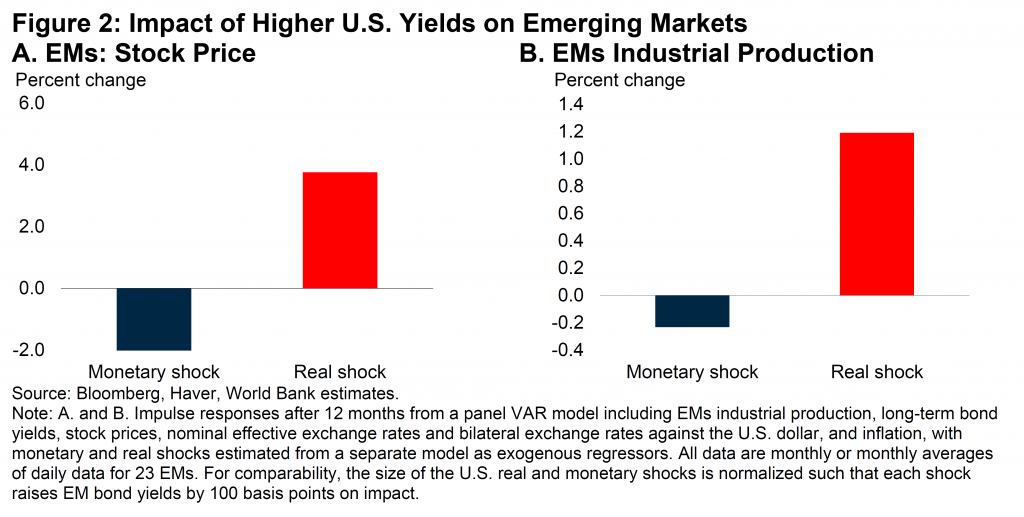 Another mitigating factor is that the tightening cycle now underway will most likely be exceptionally shallow. According to December 2015 forecasts by FOMC members, both nominal and real interest rates are expected to stay significantly below pre-crisis levels in coming years, reflecting not only still-subdued inflation expectations and upward pressures on the U.S. dollar, but also growing evidence of lower equilibrium interest rates after the crisis.

In addition, monetary policy in other major economies remains firmly accommodative. Balance sheets of the European Central Bank (ECB) and the Bank of Japan will continue to expand over the next two years. While such policy divergence could itself be a source of volatility in global currency markets, it will help keep global interest rates and U.S. term premia at low levels for some time. The impact on EMs will likely be mixed: it will contribute to capping borrowing costs but could also increase refinancing pressures in countries with sizable dollar-denominated liabilities.

2. How have growth prospects and vulnerabilities in EMs changed since the taper tantrum?

While conditions have improved gradually in advanced economies, many EMs have been slowing in recent years (Figure 3). Drivers of this slowdown have been both cyclical and structural in nature, and resulted from a combination of external and domestic headwinds (Didier et al. 2015). As a result, the growth differential and relative credit ratings of EMs have deteriorated relative to advanced economies, pointing towards a significant rotation in credit risks. This could potentially make some EMs less resilient to external shocks and more susceptible to financial stress.

Since the taper tantrum, macroeconomic and financial vulnerabilities have persisted in a number of EMs. Although there have been some improvements in current account positions among several oil importers, they have deteriorated among oil exports. Also, EMs with elevated levels of external debt have made only limited progress in reducing it. In addition, several EMs continued to exhibit sizable foreign-currency exposure. A growing number of countries have also seen substantial increases in their public debt and deficits in the post-crisis period. But perhaps the biggest source of concern is the corporate debt landscape. Corporate leverage has grown significantly in some EMs since the global financial crisis. Past experience suggests that rising corporate leverage increases the probability of capital flow reversals. 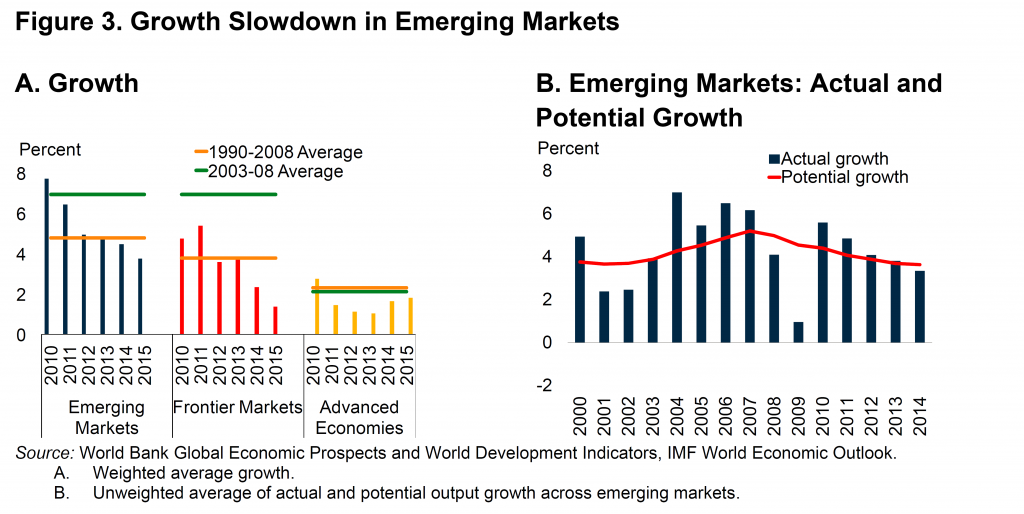 3. What are the major risks associated with the tightening cycle?

Long-term interest rates in the United States are still exceptionally low but could suddenly rise if markets change their views on the likely course of Fed policies or the U.S. economy. Such an increase could happen if markets perceive that the U.S. tightening cycle is running ahead of their expectations, or if inflation starts picking up more rapidly than anticipated. Hence, there is a risk that the U.S. tightening cycle could take investors aback at some stage, leading to bouts of volatility and a sudden increase in U.S. long-term yields.

This would likely disrupt capital flows to some EMs, with repercussions in terms of growth prospects and available policy options. If U.S. and global yields adjust in a manner similar to the taper tantrum of 2013 (increasing respectively by 100 and 70 basis points), capital flows to EMs could decline by more than 30 percent after a year, or 1.6 percentage points of their combined GDP (Figure 4.A). Such an impact could be manageable for many EMs, but it could lead to severe stress for more vulnerable economies.

Volatility during the tightening cycle could potentially combine with domestic fragilities and with the realization of other downside risks to the global economy. In the most vulnerable economies, this could translate into a perfect storm, increasing the risks of multiple sudden stops. The short-run costs of these sudden stops can be substantial. In the two years following such an event, affected countries typically saw a decline in GDP growth of almost 7 percentage points and a drop in investment growth of more than 21 percentage points (Figure 4.B). 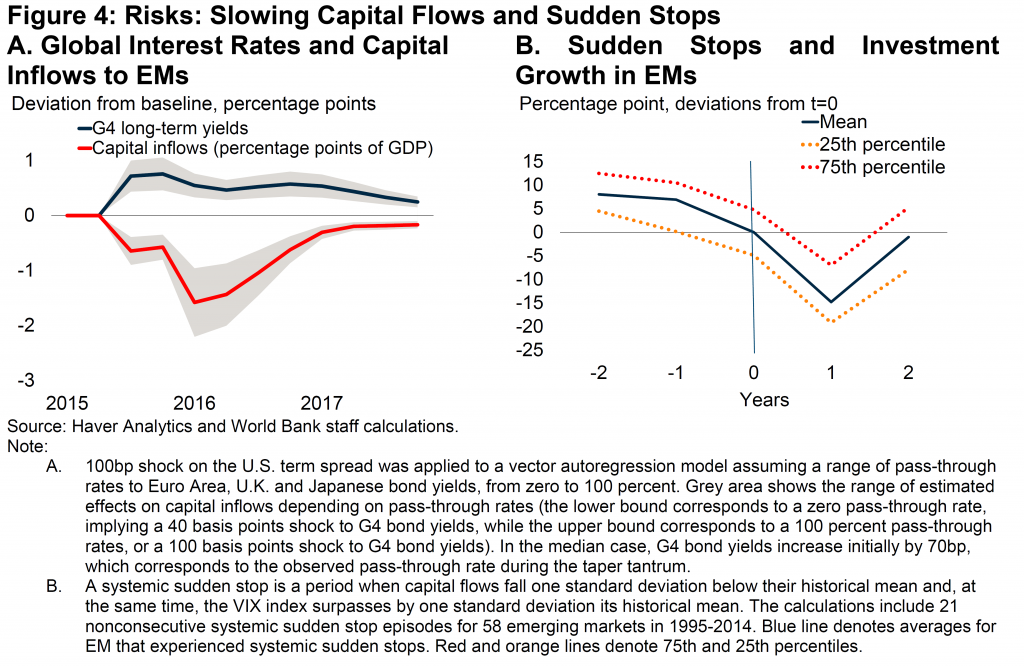 EMs find themselves at a crossroads as they confront a gradual tightening of U.S. monetary policy in an environment of weak growth and lingering vulnerabilities. Although the liftoff has so far been smooth, it does not reduce the urgency of measures aimed at containing financial sector vulnerabilities, anchoring inflation expectations, rebuilding fiscal buffers, and increasing the credibility of fiscal frameworks. Credible macroeconomic and financial sector policies could help facilitate external adjustments. Most importantly, EMs need to implement reforms that could convincingly address the structural drivers of the protracted slowdown.

This post written by Carlos Arteta, M. Ayhan Kose, Franziska Ohnsorge, Marc Stocker, and Lei Sandy Ye. The views expressed herein should be attributed to the authors and not to the World Bank Group, its Board of Executive Directors, or its management, or to any other individual or institution they are affiliated with.