Today we are fortunate to have a guest post written by Eric Fischer, PhD candidate at the University of California, Santa Cruz. 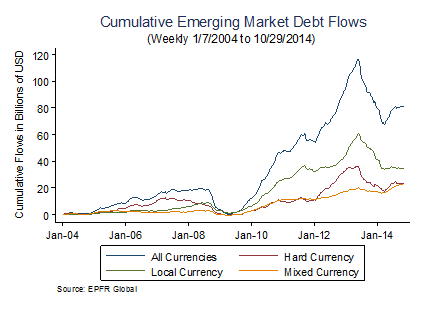 Volatility in foreign investor debt flows have caused financial crises in emerging markets during the 1990s and 2000s when they had fixed exchange rates and issued hard currency debt in dollars. When U.S. interest rates rose, countries like Mexico and Indonesia had to break their pegs, making their dollar debt unsustainable and thus leading to defaults. As a result, the International Monetary Fund and the U.S. Department of the Treasury encouraged emerging economies to develop domestic financial markets and issue local currency debt. Local currency debt now accounts for the majority of emerging market debt issuances. Since the global financial crisis, interest rates in the United States have been zero, and foreign capital flows have moved to hard currency, local currency, and mixed currency debt in emerging markets. 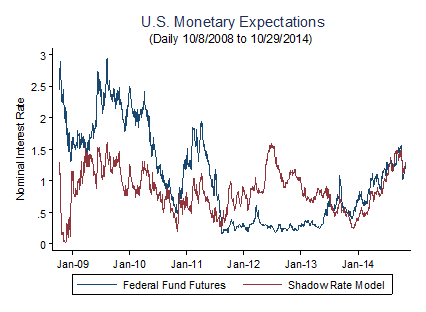 My paper “U.S. Monetary Expectations and Emerging Market Debt Flows” examines the effect of 54 Federal Reserve announcements on emerging market debt flows since the Global Financial Crisis (GFC). I do this analysis in two parts. First, I take all the Federal Reserve announcements since the GFC and categorize them as easing (unexpected), tightening (unexpected), easing (expected), and tightening (expected) using two year expectations of the short term nominal interest derived from federal fund futures and a shadow rate term structure model of expectations. For the purpose of categorizing announcements during this time period, I find that the shadow rate term structure model is a better measure than federal fund futures. 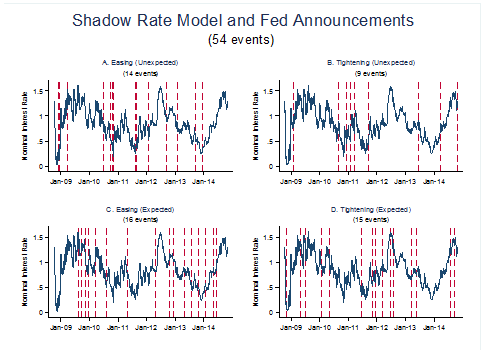 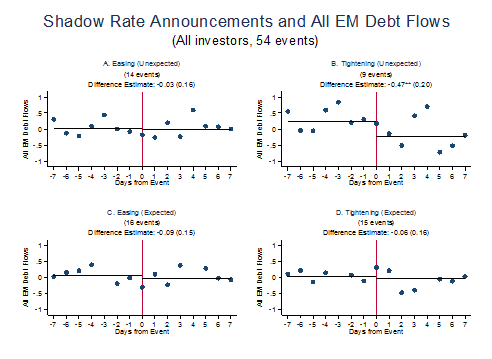 What will happen to emerging market debt flows on December 16? It appears that most market participants expect the Federal Reserve to raise rates at the next meeting. However, what is not certain is where markets expect the short term interest rate to be in two years. This measure could change at the December meeting. According to my paper, if the change in expectations is tightening (unexpected) then this will have a significant effect on emerging market debt flows. It will be interesting to see how things play out.