Today we are pleased to present a guest contribution written by Raju Huidrom, M. Ayhan Kose, Franziska Ohnsorge, and Lei Sandy Ye, all of the World Bank. The findings, interpretations, and conclusions expressed in this article are entirely those of the authors. They do not necessarily represent the views of the World Bank, its Executive Directors, or the countries they represent.

Since 2010, emerging market economies, especially the majority of the largest ones, have been undergoing a synchronous growth slowdown (Didier et al. 2015). Such a synchronous slowdown could bring significant adverse spillovers to the rest of the world, given the size and integration with the global economy of the largest emerging markets—the BRICS (Brazil, Russia, India, China, South Africa). The slowdown could transmit to other economies through trade and financial channels, through commodity prices, and through confidence effects. Against this background, this blog addresses two questions: (a) how large are the adverse spillovers from BRICS? (b) what policies could help mitigate their impact?

Among the BRICS, spillovers from China are the largest while those from others tend to be either small or confined to neighboring economies. Commodity markets are a key transmission channel of spillovers from China to other emerging markets, as China is a major source of demand for key commodities. Thus, growth in commodity exporters could slow by more than that in importers in response to a decline in growth in China.

Policies can play an important role in mitigating the adverse impact of spillovers from slowing growth in the BRICS. The appropriate policy response depends on the nature of the shock and the spillovers: a cyclical downturn in BRICS would generate temporary adverse spillovers that could be mitigated by counter-cyclical fiscal and monetary policies; a structural downturn in potential growth in BRICS would require the implementation of structural reforms. The growth slowdown in BRICS has been partly a cyclical decline from the immediate post-crisis rebound in 2010, and partly a structural slowdown (Didier et al. 2015). Hence, a mix of counter-cyclical fiscal or monetary policy stimulus and structural reforms could be used to support activity.

Fiscal policy. Fiscal stimulus could help stabilize a cyclical slowdown in activity. Fiscal multipliers—the change in real GDP generated by a 1 dollar increase in fiscal spending—tend to be larger during recessions than expansions, in countries with ample fiscal space, in less open economies, and for stimulus conducted through expenditure increases, especially public investment, rather than tax cuts (World Bank 2015). A spillover-induced, cyclical slowdown in activity may be an opportunity to address sizeable infrastructure needs in emerging markets, since infrastructure investment can be a particularly effective form of fiscal stimulus. Fiscal stimulus, however, is only fully effective if sufficient fiscal space is available (World Bank 2015). Many emerging markets have used much of their policy space during the global stimulus of 2009 and have yet to rebuild it. Many of them may therefore not be in a position to implement effective counter-cyclical stimulus. 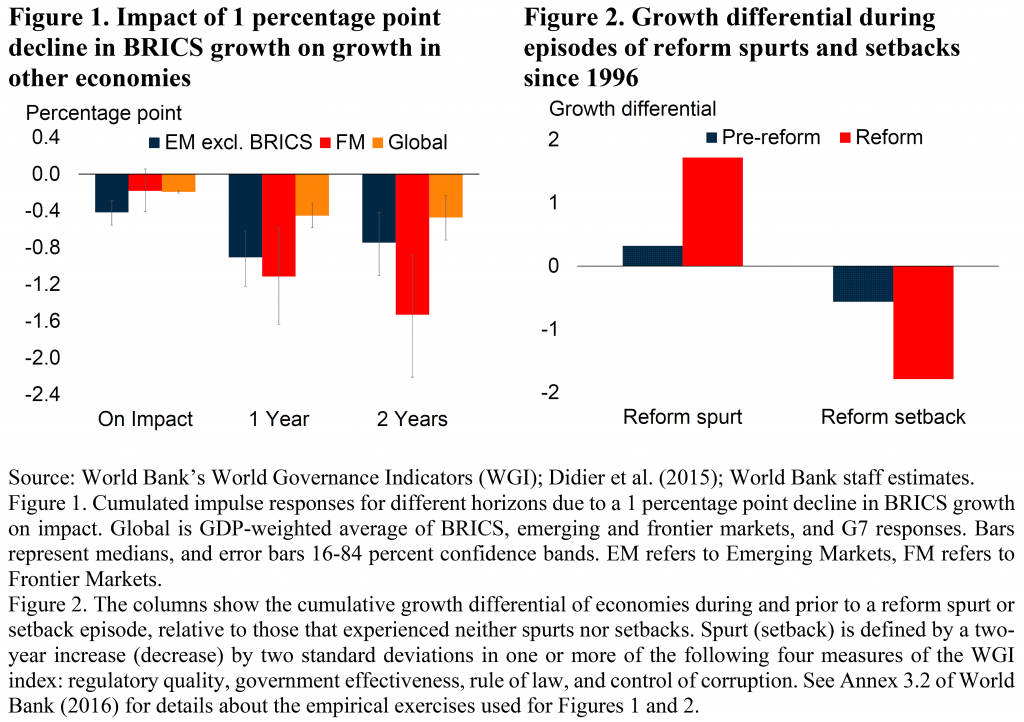 Structural policies. A sustained, structural decline in BRICS growth potential rather than a temporary cyclical downturn would generate spillovers that likely result in an era of lower growth in other emerging market economies. While at times politically challenging to implement, structural reform measures can help emerging markets adjust to this new era of weak growth. Structural reforms are associated with long-term benefits such as growth spurts triggered by reforms (Figure 2), amplification of the growth dividends from public investment, greater job creation and formal sector activity. A renewed structural reform push could therefore help lift growth prospects and, to the extent it encourages investment, support domestic demand as well as help improve investor sentiment and capital flows.

The growth slowdown in BRICS could adversely affect global growth, in particular growth in other emerging markets and frontier markets. Spillovers from BRICS would be more pronounced if the slowdown were accompanied by financial market stress. Policy makers may need to support activity with fiscal and monetary stimulus, at least where policy buffers are available. They could derive substantial gains from well-designed, credible structural reforms that retain investor confidence and capital flows in the short-run, and that help lift growth prospects for the long-run. This would be especially appropriate for countries with limited room for expansionary fiscal and monetary policies.

3 thoughts on “Guest Contribution: “How to Mitigate Adverse Spillovers from BRICS? Role of Policies””