Although the Great Recession was viewed—especially in Europe—as mainly a U.S. problem, the eurozone was implicated from the start and felt virtually the same impact in the early stages (Figure 1). The U.S. economy, however recovered much faster. U.S. stock prices and GDP regained their pre-crisis levels by late-2011; the eurozone barely reached that stage in 2015. 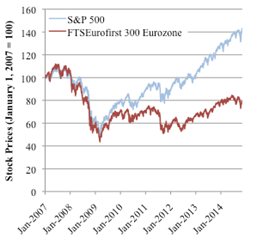 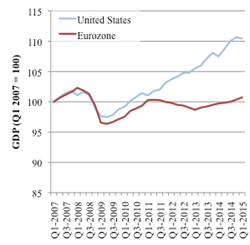 The U.S. policy response was much more proactive. Fiscal stimulus was greater than in the euro area in 2008-9; the U.S. also returned to fiscal austerity later, in 2011, rather than in 2010 as the eurozone did (Mody 2015, p. 2). More important was the U.S. authorities’ active resolution of banking stress; eurozone banking problems were allowed to fester. And throughout, U.S. monetary policy was much more aggressive. In a recent paper, we used a narrative approach to identify the role of monetary policy during the Great Recession (Kang, Ligthart, and Mody, 2015).

The U.S. Federal Reserve lowered its policy interest rate (the Fed Funds rate, the rate at which banks lend to each other) from 5¼ percent in September 2007 to 0-0.25 percent in December 2008 (Figure 2). At that point, the Fed also initiated “quantitative easing” and began “forward guidance,” making public its intention to keep interest rates low “for some time.” The ECB’s first reaction to the Great Recession was in July 2008, and it was to raise the policy rate (the main refinancing rate, the interest rate banks pay to borrow from the ECB). After the Lehman bankruptcy in September 2008, the ECB joined an internationally coordinated rate reduction on October 8. But then, the ECB slow pace of rate cuts was interrupted by two more hikes—in April and July 2011. The policy rate was brought to near-zero only in November 2013; modest quantitative easing began in September 2014 and was expanded in January 2015. 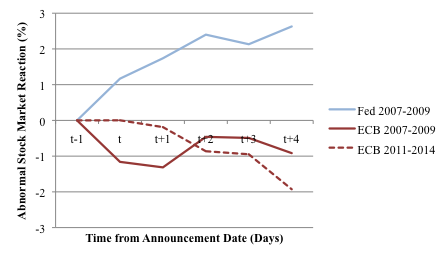 Figure 3: Stock Market Reactions to the Reduction of Interest Rates. Note: In computing the average “abnormal” reaction between 2007 and 2009, we do not include the market reaction on October 8, 2008 because of high volatility in the days following. The results remain unchanged.

The stock market responded positively to the Fed’s rate cuts. In contrast, the market’s reaction to the slower-moving ECB was, on average, negative between 2007 and 2009 and also between 2011 and 2014. Consistent with our findings around the announcements, U.S. stock indices moved ahead of those in the euro area, as seen in Figure 1. Moreover, as Figure 1 also shows, stock prices tracked relative differences in GDP performance, in line with the Akerlof-Shiller (2009) view that improved investor sentiment helps stem the fall and begin the recovery.

The anticipation of the announcements was not the primary influence on stock prices. In the U.S., the one unexpected announcement did trigger a strong response; but even the anticipated rate cuts were viewed favorably, especially if they were 50 basis points (0.5 percent) or larger. Researchers at the Chicago Fed find that anticipated policy actions have positive stimulative effects if they signal deviation from historical policy (D’Amico and King 2015, p. 2-3). Thus, while formal “forward guidance” came only on December 16, 2008, the actions up until then established a presumption that the Fed was pursuing a risk management approach and creating a safety net. In Woodford’s (2012) terminology, the Fed was not just responding to news but was changing policy. Specifically, the larger rate cuts and accompanying statements signaled that the Fed was trying to “forestall” financial turmoil from spiraling out of control.

In contrast, even the larger ECBs rate cuts were seen as “too little, too late.” The ECB was reacting to news—building its shelter amidst a raging storm. ECB statements also mused endlessly about rising inflation and hence almost never promised more forthcoming action. The Bank of England was also late, but made up with quicker and much larger rate cuts, followed by quantitative easing.

It is true that the Fed has a clear dual mandate to support employment and maintain price stability. However, the central banks’ differing mandates were not the reason why they acted differently in the Great Recession. The ECB—despite its primary focus on price stability—had previously responded as if it had a dual mandate. Indeed, as Lars Svensson has pointed out, the ECB’s goal of “medium-term” price stability (over a two-year horizon) implied that it would not seek to bring inflation down instantly since attempting to do so would cause an unreasonable drop in output (Svensson 1999, p. 83, 96, and 107). The result, Svensson argues, is that ECB’s stated objective is indistinguishable from that of central banks with dual mandates, as studies have confirmed (Taylor 2010 and Nechio 2011).
Rather, as Alan Blinder pithily states, the Fed operated during the Great Recession on the “dark” view that a huge loss of wealth could tip the economy into a free fall (Blinder 2013, p. 94). The priority was to prevent or manage that risk. Between 2007 and 2009, the Fed made the judgement that inflation risk was low and the main task was to prevent a downward output spiral. Later, the Fed used the same risk management approach to fend off the risk of price deflation.

By contrast, the ECB concluded that a temporary scare had caused banks to hoard cash and restrict lending to other banks (Blinder 2013, p. 94, Stark 2008). Thus, the ECB provided ample liquidity to banks, although no more so than the Fed. As the Fed understood, such passive provision of funds to banks was insufficient to induce banks to lend more and stimulate economic growth (Hetzel 2012). The loss of confidence and severe demand contraction required active monetary stimulus. The ECB insisted that foreign demand would “support ongoing growth” in the eurozone (e.g. Trichet and Papademos 2008).

The essential difference between the Fed and the ECB, therefore, boiled down to how each institution viewed the evolution of the economy. Even though inflation rates in the U.S. and the euro area were nearly identical (Figure 4), the ECB’s overemphasized the risk of a commodity price-wage spiral and underestimated the financial and economic risks (Hetzel 2014). Market commentary repeatedly sent this message, as we document in our paper. 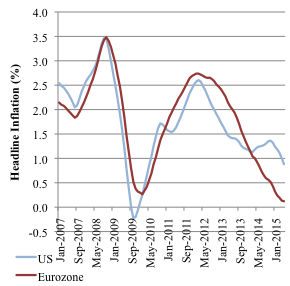 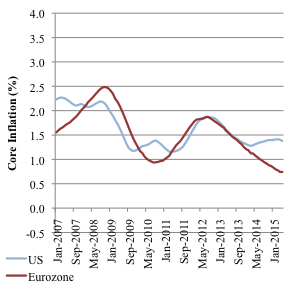 Figure 4: Headline and Core inflation for the US and Eurozone. Note: 12-month moving average of year-on-year inflation.

The Fed transitioned to worrying about deflation risk as early as June 2010, even though inflation was rising in tandem with the European inflation rate (Figure 4) (Federal Reserve System 2010). The Fed’s main tools now were quantitative easing and forward guidance. As is well-known, in this inglorious interlude, the ECB twice raised interest rates. But even past that point, the ECB continued to reject a risk-management approach and followed rather than anticipated the deceleration in inflation. Because it had delayed stimulus during 2007-9, the ECB needed more aggressive action, rather than continued wait-and-see approach. At a November, 2013 press conference, a journalist described the ECB as a “pea-shooter dealing with an approaching deflationary tank” (Draghi 2013). ECB President Mario Draghi responded that the ECB was waiting for more data, and would do more, “if needed.” Thus, the ECB acted asymmetrically: rising commodity prices were expected to feed persistent inflation but falling commodity prices were expected to reverse course. Once again, markets and analysts reacted impatiently. Interest rate cuts were not enough. The question was why more aggressive “non-standard” actions were not being taken.

We conclude also that the Fed gained credibility even though it appeared to temporarily suspend its commitment to price stability. Michael Bordo and Finn Kydland (1995) have argued that setting aside a policy rule to deal with extraordinary contingency is consistent with commitment to long-term goals. The Fed made clear its objective of preventing a meltdown and, as Blinder (2012) has emphasized, credibility principally requires that words be matched with deeds.

In the eurozone, words were often a substitute for deeds. Markets and investors reacted to the tight monetary policy, which added to the economic drag and deflationary tendencies due to fiscal austerity and lingering banking problems. By mid-2009, euro area output had fallen behind that of the U.S., and it never caught up. Delays in stimulating economic recovery have permanent consequences, as recent analysis reaffirms (Fatas and Summers 2015). For all its rear-guard action, the ECB misread the crisis and will be associated with the legacy of a weak recovery and more entrenched deflationary tendencies. If, as is entirely possible, the euro area’s core inflation rate remains below 1 percent a year, the ECB’s credibility will be twice hurt. Not only would it have failed to provide stimulus when needed, but it would have allowed the euro area to slip into a low inflation trap, well below its stated target of 2 percent a year.

Blinder, Alan, 2012, “Central Bank Independence and Credibility During and After a Crisis,” Griswold Center for Economic Policy Studies Working Paper No. 229, September.

Blinder, Alan, 2013, “After the Music Stopped: the Financial Crisis, the Response, and the Work Ahead,” New York: Penguin Press.

Nechio, Fernanda, 2011, “Monetary Policy When One Size Does Not Fit All,” Federal Reserve Bank of San Francisco Economic Letter, June 13.

23 thoughts on “Guest Contribution: “The ECB and the Fed: A Comparative Narrative””