Substantial attention has been devoted to the disasterous effects of implementing a Donald Trump agenda of imposing 45% tariffs on imports of goods from China. To gain some perspective, consider the implications for prices of goods imported from China if such a tariff were imposed (and a large country assumption used, so that only half of the tariff increase manifested in increased prices). 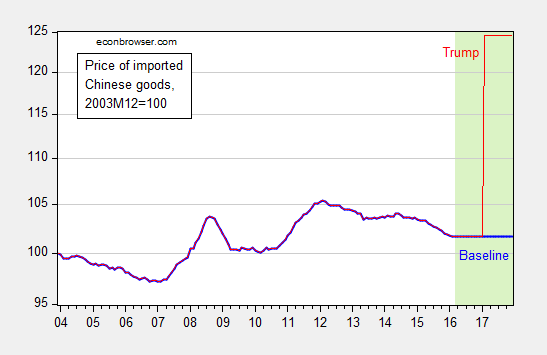 Obviously, drop the large country assumption, and the resulting price increase can be up to 45%.

An economic model of Trump’s proposals, prepared by Moody’s Analytics at the request of The Washington Post, suggests Trump is half-right about his plans. They would, in fact, sock it to China and Mexico. Both would fall into recession, the model suggests, if Trump levied his proposed tariffs and those countries retaliated with tariffs of their own.

Unfortunately, the United States would fall into recession, too. Up to 4 million American workers would lose their jobs. Another 3 million jobs would not be created that otherwise would have been, had the country not fallen into a trade-induced downturn.

The job losses would be halved if China and Mexico chose not to retaliate to the tariffs of 45 percent and 35 percent, respectively. In which case U.S. growth would flatline, but the country would not fall into recession.

Here is the key graph from the article, depicting the baseline employment levels and the alternative under Trump: 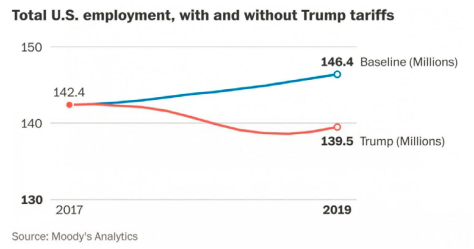 Suffice to say, even the “no-retaliation” scenario (which in my personal, but limited, knowledge of Chinese characteristics, seems unlikely) is pretty unappealing.

That’s the Nuclear option. What is interesting is to consider what I call the Near nuclear option, which is implicit in the position statement on Senator Sanders’ website (Agenda Item 7).

We must end our disastrous trade policies (NAFTA, CAFTA, PNTR with China, etc.) which enable corporate America to shut down plants in this country and move to China and other low-wage countries.

Ending PNTR (I interpret the statement thus, as does Vox) with China sounds rather arcane, and even innocuous. After all, the acronym stands for “Permanent Normal Trading Relations”. It’s not clear what part of PNTR Senator Sanders wishes to do away with; if it’s the “P” in PNTR, then NTR will have to be renewed by Congress year after year, as it was from 1980 until 2000. How easy will that be in these times?

If NTR is not renewed, then what happens? Et voila, tariffs revert to levels applied before Most Favored Nation status was granted to China: to 44%. This figure is suspiciously close to the 45% value Donald Trump has cited.

So, what’s the difference between a Trump strike and a Sanders strike? Apparently, the only difference is that Donald Trump has promised to raise tariffs “on day one”, while Senator Sanders has not laid out a timeline. (An alternative interpretation is that Senator Sanders will only move to revoke PNTR if currency manipulation is proved, while Donald Trump won’t wait for a determination.)

More on the trade positions of both candidates here, and the likelihood each one can make a case that the Chinese currency is undervalued, here.

14 thoughts on “US-China Trade Policies: the Nuclear — and Near-nuclear — Options”