“A Crisis that Should Not Have Happened”

Spring is the time of events at the University of Wisconsin-Madison. On Monday, among the other conferences and talks, the Jean Monnet European Union Centre of Excellence, the Center for European Studies, and the Department for Political Science hosted a fascinating (and at times provocative) discussion by Professor Charles Wyplosz of the Graduate Institute-Geneva.

The subtitle to this post is the title for the first slide of his presentation (the entire presentation is here):

He characterizes all these as “institutional failures”. Much of the terrain he covered is familiar to those who have followed the eurozone crisis: while the the eurozone member countries had accumulated large debts by 2009, that wasn’t the entire story; fiscal discipline was never achieved pre-crisis; there was no lender of last resort; the absence of a unitary banking union was fatal; and so forth.

The entire presentation is here, but I’ll focus on a few key points. First, high level summitry was completely ineffective; this point was illustrated by all the summits (vertical lines) and the course of sovereign spreads, in the figure below. 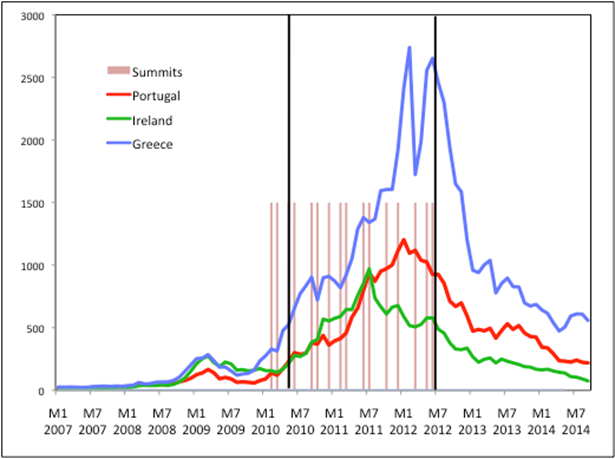 Spreads only come down with the ECB’s Draghi committing to “whatever it takes”.

Another point, the ECB was (way) behind the curve in responding to the crisis. 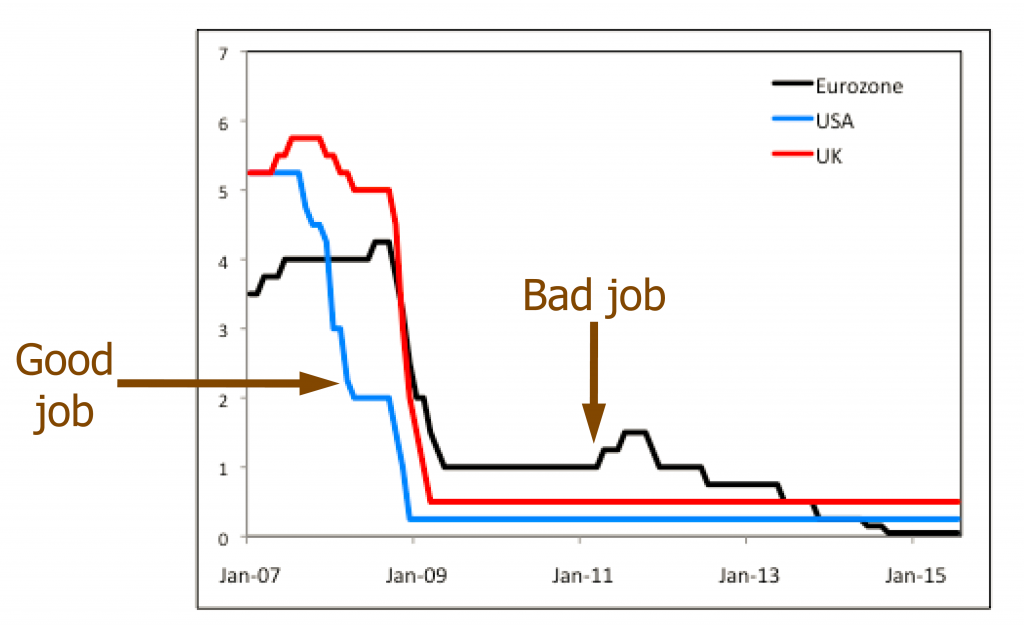 Not only was the ECB slow to cut rates, it actually raised rates prematurely.

One rather interesting point Wyplosz makes is that fiscal discipline is necessary, discipline of the sort American states have. This discipline would be implemented by way of a cyclically adjusted budget balance requirements.

While the cyclically adjusted balance is a better metric than a unadjusted balance, it’s not clear to me that such an arrangement would be sufficient to underpin a monetary union, given the absence of a eurozone-wide government that can effect substantial transfers, as does the Federal government in the US (via marginal tax rates, unemployment insurance, etc.) (my views on this subject laid out here).

Wyplosz’s arguments are laid out more comprehensively and formally here. And a way forward on restructuring the outstanding (and usnsustainable) levels of public debt in the eurozone member countries is laid out here.

4 thoughts on “Charles Wyplosz on the Eurozone Crises”