Many analysts had anticipated that a dramatic drop in oil prices such as we’ve seen since the summer of 2014 could provide a big stimulus to the economy of a net oil importer like the United States. That doesn’t seem to be what we’ve observed in the data.

There is no question that lower oil prices have been a big windfall for consumers. Americans today are spending $180 B less each year on energy goods and services than we were in July of 2014, which corresponds to about 1% of GDP. A year and a half ago, energy expenses constituted 5.4% of total consumer spending. Today that share is down to 3.7%. 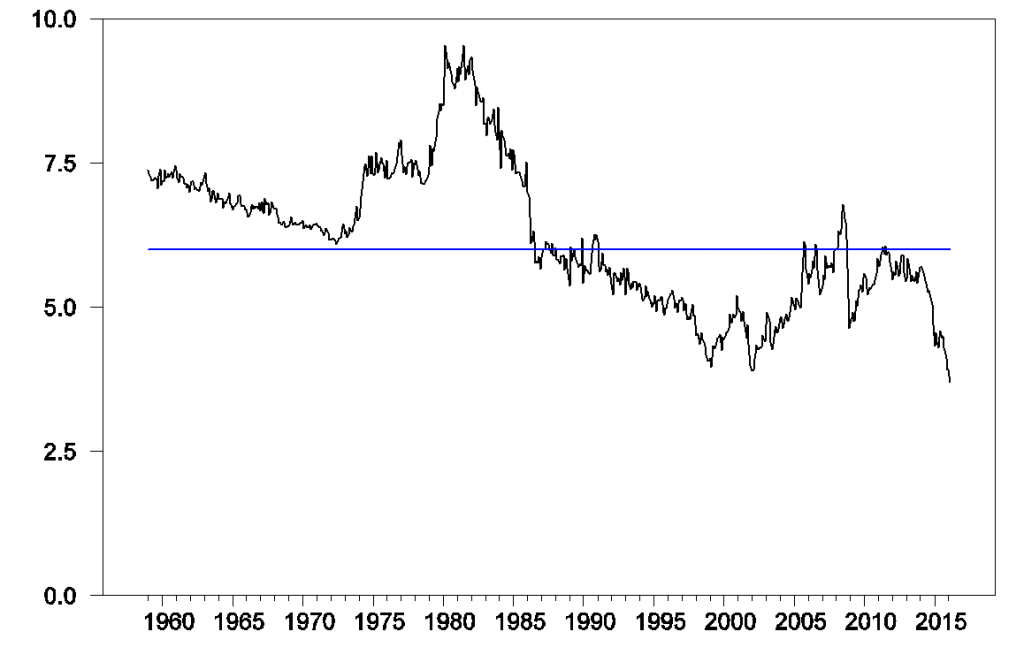 Consumer purchases of energy goods and services as a percentage of total consumption spending, monthly 1959:M1 to 2016:M2. Blue horizontal line corresponds to an energy expenditure share of 6%.

But we’re not seeing much evidence that consumers are spending those gains on other goods or services. I’ve often used a summary of the historical response of overall consumption spending to energy prices that was developed by Paul Edelstein and Lutz Kilian. I re-estimated their equations using data from 1970:M7 through 2014:M7 and used the model to describe consumption spending since then. The black line in the graph below shows the actual level of real consumption spending for the period September 2013 through February of 2016, plotted as a percent of 2014:M7 values. The blue line shows the forecast of their model if we assumed no change in energy prices since then, while the green line indicates the prediction of the model conditional on the big drop in energy prices that we now know began in July of 2014. 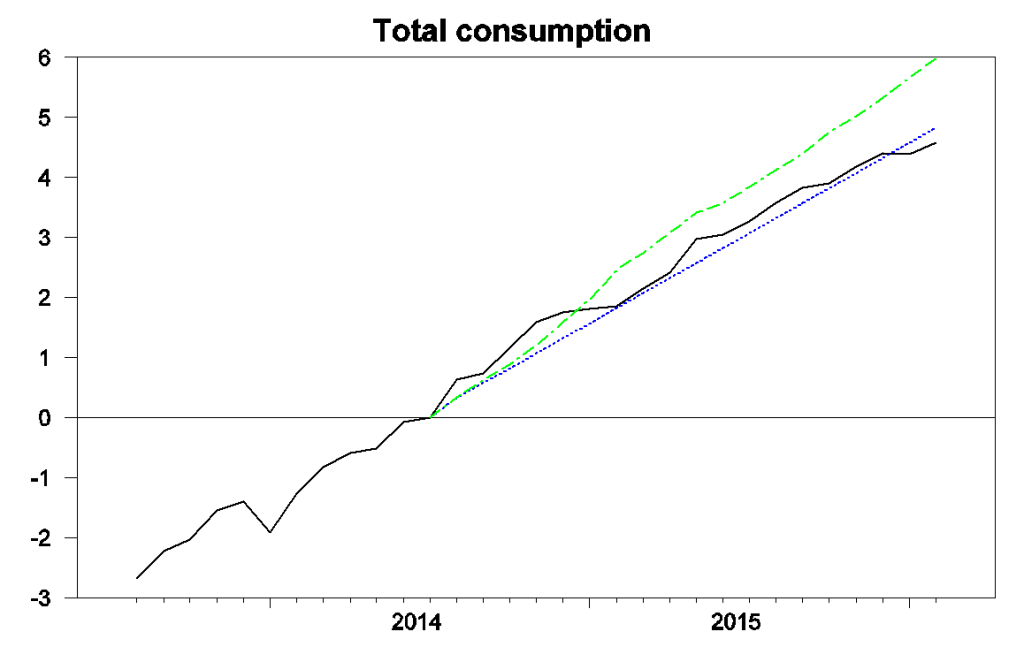 These calculations suggest that while there was a modest boost in spending in the second half of 2014 and first half of 2015, it was significantly less than would have been predicted from the historical relation between spending and energy prices. Moreover, any boost seems to have completely vanished by this point, with actual consumption even a little below what would have been predicted had there been no drop in energy prices at all.

A study of individual credit and debit card transactions by JP Morgan Chase Institute found that at the individual level, consumers did seem to be spending most of the windfall on other items. Their evidence for this was that if you compared the spending of an individual who had formerly had a big share of their budget going to gasoline with someone who did not, you saw the spending by the first person rise relative to the second by almost the full amount of the first person’s gain. The reconciliation between this micro evidence, which suggests that consumers did spend much of the windfall, and the macro evidence, which shows no evidence of a significant increase overall, is that there were other factors besides oil prices that were holding everybody’s consumption back, such as slower income growth and more precautionary saving. Spending by households with big gasoline expenses may have risen relative to other households at the same time that the average spending by all households came in close to trend. These aggregate factors show up as part of the “error term” in regression models like Edelstein and Kilian’s. If that’s the right way to interpret this, it means that aggregate consumption spending did get a boost from lower oil prices in the sense that we would have seen much more anemic growth of spending had oil prices not come down so dramatically.

On the other hand, there can be little debate that lower oil prices have meant a major hit to the incomes of U.S. oil producers. One place that this is starting to show up in the GDP numbers is in capital expenditures. Spending on mining exploration, shafts, and wells was contributing $146 B at an annual rate to U.S. GDP in the second and third quarters of 2014. By the end of 2015 that number was down to $65 B, a drop of about half a percent of GDP. 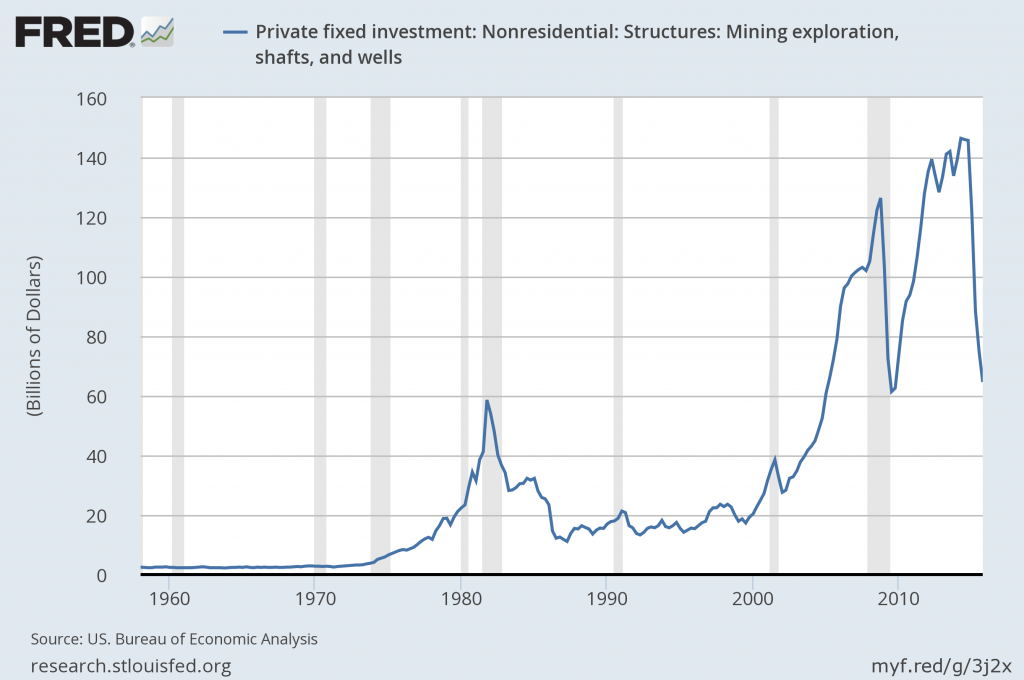 So far the resulting drops in U.S. oil production have been relatively modest. But I am expecting a significant decline for 2016, and that will be an additional direct drag on U.S. real GDP when it happens. Feyrer, Mansur, and Sacerdote estimated that the fracking boom caused the number of Americans working to be 3/4 of a million higher and the unemployment rate to be 0.5% lower during the Great Recession than it otherwise would have been. We’re about to watch that process operate in reverse.

If the U.S. were not a net importer, then even if the added spending by consumers was exactly equal to the reduced spending by producers, the result could still end up being a net drop in GDP. The reason is that if I buy another restaurant meal in New York, that’s not much help to someone who was counting on selling sand (or for that matter even restaurant meals) to frackers in Texas. As enterprises that were selling items to those working in oil production see a drop in their demand, they may end up laying off some of their own workers. As a result of those layoffs, the net loss in Texas could exceed the gains in New York. In a 1988 paper I showed that in an economy that produced all its own oil, an oil price decline could lead to higher total unemployment, in part because it takes time for people in the oil-producing regions to move to the areas where the jobs are now available.

For a net oil importer like the United States, the direct dollar gains to consumers exceed the dollar losses to domestic producers. Even so, multiplier effects from displaced workers and capital in the oil sector could end up eating away at some of those net gains. When oil prices collapsed in 1986 we saw no boom in the national U.S. economy, and in fact Texas and other oil-producing states experienced their own recession.

On the other hand, when oil prices spike up rapidly the result is unemployed labor and capital in sectors like autos and their suppliers. Furthermore, in the days before fracking there was a much longer lead time between an increase in oil prices and an increase in spending by oil producers. The result was an unambiguous net negative shock to GDP from a big upward spike in oil prices. The oil price shocks of 1973, 1979, 1980, 1990, and 2007 were all followed by economic recessions. In a recent paper I surveyed a number of academic studies that concluded that while a sharp increase in oil prices can reduce U.S. GDP growth, it’s harder to see evidence of significant net gains for U.S. GDP from a sharp decline in oil prices

It looks like we’ve just added some more data to support that conclusion.

49 thoughts on “Why no economic boost from lower oil prices?”